A deck swab gives directions, but then there's the law, even for the King of Clams 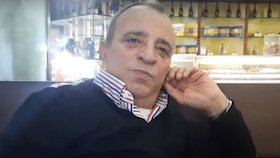 In 2006 Italian "fisherman" Igli Rosato a.k.a Athos Rosato spoke with US journalist Jason Felch about the fateful day in 1964 when the Victorious Youth bronze was fished from the Adriatic.  In that interview Rosato told the journalist that the statue was hauled up 32 (nautical) miles out from the Italian coast.

Not good with math or directions evidently, in 2007 Rosato changed his story and said the bronze was hauled in about 43 miles to the east of Mount Conero, a promontory situated directly south of the port of Ancona on the Adriatic Sea and about 27 miles from the Croatian coast, from a depth of about 75 meters.

NOTE: This is the same distance given by the ship's captain, Romeo Pirani in his statements.


Then, in this recent video posted to Italian news this morning, Rosato was filmed saying that the Ferruccio Ferri hauled in their nets somewhere around 37/38 miles from the port of Ancona, and 24/25 miles from Fano.

Even though there are inconsistencies in all of his statements, all the quoted find zones are theoretically outside trans-boundary waters.

But having said that, there are several things to consider when interpreting the reliability and credibility of Rosato's statements.

For example, in 1964, at the time Athos Rosato worked aboard the Ferruccio Ferri as a lowly deck swab, he was just 15 years old.  Not exactly a reliable age or seaworthy position to have developed much in the way of navigational skills or to have a true grasp of directions at sea, map reading, nautical miles or sea depths.  As a testament to the limits of his teenage capabilities, (or who wore the proverbial pants in his family), the smugglers chose to pay Rosato's mother for his portion of the sale price for the bronze the fishermen salvaged-- 120,000 lire, or the equivalent of €60.

Second, in addition to an early career as a wannabe fisherman-smuggler, Rosato is not exactly known for his impeccable character or adult age trustworthiness.  Hang out around the city of Fano and you will hear him called "the King of Clams." Flip through local newspapers and you will be reminded that in 2008, having become an affluent fish entrepreneur, the former deck-hand became caught in a net himself, brought up on charges stemming from an Italian financial crimes investigation, code named Fiscopoli.

Accused of having paid a €240,000 bribe to the tax commissioner of Pesaro to wipe away a €32 million asset assessment for his fishing company, Rosato Athos Vongole srl., the businessman was sentenced to two years in prison, for corruption.  As part of his sentence he had four properties confiscated: his company, an apartment, a villa and a warehouse.  He was also the subject of an assault and kidnapping attempt via a band of scrappy petty criminals, some of whom he had personal and work affiliations with.

But assuming Rosato's propensity for criminal behavior, bribery and corruption have nothing to do with his memory of nautical miles and the findspot where the bronze statue was fished from the Adriatic when he was a teenager, what does all this international waters stuff mean in relation to Italy's final ruling on the Getty Bronze, I mean the Athlete of Fano? 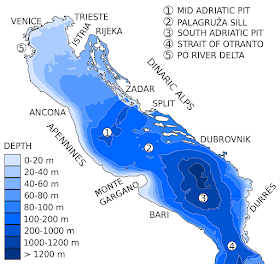 That area was also widely trawled by Italian and, at the time, Yugoslavian fishermen. 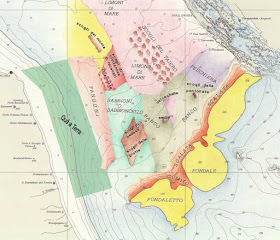 But before jumping on the it's-a-Greek-statue-found-in-international-waters bandwagon....as the Getty Museum has long claimed, it is worth remembering that the Italian judge in 2009 had already acknowledged that the statue was likely found in international waters.*

So how is it considered Italian?

What the Getty's press releases and most of the big new sites fail to address is that Article 4 of the Italian Navigation Code states that an Italian flagged vessel or aircraft are considered Italian “territory” for the purposes of applying the country's Patrimony Law and that any “found” object of historical or artistic value hauled aboard said vessel belongs to the State.  Full stop.

From a practical point of view, the State attributes its nationality to its ships by way of registering them in appropriate registers. As each ship can sail under the flag of a single State, by doing so, the Ferruccio Ferri was subject, on the high seas in 1964, to Italy's exclusive jurisdiction.

Furthermore the statue, once brought onto Italian shore, was hidden away and never registered with the appropriate authorities in violation of the law.  Then it was exported out of Italy in contravention of existing Italian law which requires an export license for any work over fifty years old made by an artist who has died.

The Getty knows all this, it's just electively choosing to focus on the one thread of the subject that cannot be proven definitively --where the feet of the Getty bronze actually still are and instead glosses over the illegality of transit related to this antiquity.  It also disregards the fact that the museum was happy to purchase a statue of Greek origin without any correspondingly legit paperwork from any country of purported origin.

To read all of ARCA's posts on the Getty case, follow our link here.