Statement (plus commentary) on Press Release from Lisa Lapin, Vice President of Communications, J. Paul Getty Trust, Regarding Decision by Italy’s Court of Cassation on the Legal Ownership of the Victorious Youth 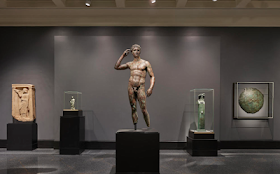 Reprinted in its entirety.  Original PDF can be found on the Getty's website here.

NOTE:  Sections highlighted in blue have commentary from ARCA at the conclusion of the Getty's statement.


Statement from Lisa Lapin, Vice President of Communications, J. Paul Getty Trust, Regarding Decision by Italy’s Court of Cassation
on the Legal Ownership of the Victorious Youth


We will continue to defend our legal right to the statue. The law and facts in this case do not warrant restitution to the Italian government of a statue that has been on public display in Los Angeles for nearly a half century. The statue is of ancient Greek origin, was found in international waters in 1964, and was purchased by the Getty Museum in 1977, years after Italy’s highest court, the Court of Cassation, concluded in 1968 there was no evidence that the statue belonged to Italy. The court has not offered any written explanation of the grounds for its decision, which is inconsistent with its holding 50 years ago that there was no evidence of Italian ownership.

Moreover, the statue is not and has never been part of Italy’s cultural heritage. Accidental discovery by Italian citizens does not make the statue an Italian object. Found outside the territory of any modern state, and immersed in the sea for two millennia, the Bronze has only a fleeting and incidental connection with Italy.

We believe any forfeiture order is contrary to American and international law. Our priority is to continue our productive and long-standing collaborations with our many Italian colleagues and the Cultural Ministry. It is unfortunate that this issue has been a distraction from that important work.

Over more than four decades, the Getty has worked closely with Italian colleagues in conserving, protecting, researching and celebrating Italy’s extraordinary cultural heritage. The Getty Foundation has supported 137 grant projects on Italian art totaling more than $20 million, awarded more than $500,000 in fellowships to Italian scholars, and hosted more than 130 Italian scholars, fellows, and interns supported by grants totaling over $1.3 million.

Since 1984, the Getty Museum has lent more than 130 paintings, sculptures, drawings, photographs, and other works of art to over 50 different institutions in Italy. Similarly, the Getty Research Institute (GRI) has, since 1991, lent 70 prints, drawings, manuscripts, and rare books to exhibitions in Italy.

The Getty has presented more than two dozen exhibitions in collaboration with institutions in Italy, a number of them arising from cultural agreements between the Getty and the Italian Ministry of Heritage, Culture and Tourism, the Sicilian Ministry of Culture and Sicilian Identity, the Museo Archeologico Nazionale di Napoli, the Musei Capitolini, Rome, and the Museum of Aidone. As part of these collaborations, the Getty undertook the conservation of five highly significant works of ancient art and a collection of 37 votive offerings, all belonging to Italian museums.

Other collaborative efforts have included decades-long research and conservation projects funded and coordinated by the Getty, including the Panel Paintings Initiative, Mosaikon, Herculaneum fresco restoration, Keeping it Modern, and many others.

We very much value our strong and fruitful relationship with the Italian Ministry of Culture and our museum colleagues in Italy. A more detailed account of the Getty’s funding and other support for Italian cultural heritage is available here:

The law and facts in this case do not warrant restitution to the Italian government.

Italy's Court of First Instance upheld, in its 46 page ruling, written by Italian Magistrate Giacomo Gasparini, on the grounds of Articles 666, 667, and 676 of the Italian Criminal Code, article 174 section three of the Legislative Decree no. 42 of 2004 and article 301 of Presidential Decree. 15 of 1972, that the order of forfeiture for the statue known as the "Victorious Youth," attributable to the Greek sculptor Lysippus, currently detained by the J.P, Getty Museum was confirmed as previously ordered on February 10, 2010.

In yesterday's ruling, the Italian Court of Cassation, did not quash the lower court's ruling, therefore, by Italian law, the object does warrant immediate restitution.

was found in international waters in 1964

This is what the Getty would have its reader's take away from its press statements over the years as the rationale for retaining the sculpture, more on that here.  But the voluminous documentation provided by the Italian government to the Tribunal of Pesero, hinges legally upon the situation in which the ancient bronze was hauled aboard an Italian fishing vessel and what happened after it was brought on shore in Fano.

According to the evidence presented in the Court, the statue became subject to Italian heritage law when the bronze was hauled aboard ship in the nets of Italian fishermen aboard an Italian registered fishing vessel, the Ferruccio Ferri in 1964.  Additionally the crewmen were required, under Italian law, to report their discovery to the appropriate legal authorities and failed to do so.

Furthermore the fishermen brought the statue on shore to the Italian city of Fano where they then intentionally hid it from Italian authorities, first, by burying it in a cabbage patch and later, by hiding it in a priest's bathtub rather than declaring their cultural find, as required, to the Italian customs dogana and then sold what would have been considered state property, illicitly for a small sum divided between the captain and his boatsmen.

The court has not offered any written explanation of the grounds for its decision.

The Italian court's 46 page written explanation was submitted by the Giudice dell'esecuzione, Magistrate Giacomo Gasparini, and deposited with the Tribunal of Pesaro - Ufficio GIP-GUP on the 8th of June 2018.

Like other supreme courts of the cassation model around the world, Italy's highest court is not tasked with re-examining the entire body of evidence in the Getty case as discussed in Pesaro, nor is it responsible for adjudicating the case further. Evaluation of the evidence and adjudication was done at the Court of First Instance in Pesero and the Supreme Court's power to quash a judicial decision for defective reasoning is limited (See Art 360, para 1, no 5 of the Italian Code of Civil Procedure).

The Court of Cassation's role is to exercise control over courts of general jurisdiction and to examine whether their judgments infringe upon provisions of national legislation.  In simpler terms Italy's highest court deals exclusively with issues of law, not with the facts and merits of an individual case. That is to say, they do not decide afresh the cases that come before them when parties do not agree with the lower court's decision.

Additionally the Court of Cassation does not make rulings solely on cases that have passed through the Corte d'Assise d'Apello, Italy's Appellate Court. Cases which meet certain criteria, like this one regarding the Athlete of Fano, can be appealed by the parties directly to Italy's Supreme Court, whose role is then to specifically rule on erores in iudicando and errores in procedendo (errors in procedure or application of the law).

As the Court of Cassation did not find either of the defects aforementioned errors, it rejected the Getty's appeal and did not quash the decision of the judge in the lower grade.

When a ruling to dismiss an appeal is delivered, the impugned decision becomes irrevocable and as with all Supreme Court decisions, the court's rapporteur will publish the Courts explanatory statement on its decision within the legally allowable time frame.

The statue is not and has never been part of Italy’s cultural heritage.

How can either the Getty or Italy ever prove or disprove this statement?

We do not know anything about the paternity and origins of the bronze aside from the statue's modern "life" which began only after the bronze was fished from the seabed.

But where was it before?
Did the Romans, after having conquered Greece, steal it to bring home, only to have the ship transporting it sink on its return voyage?
Was the statue at one point made or destined for the Greek colonies in Southern Italy or Sicily?

These are questions we likely will never know the answers to unless the wreck is found which surely still contains the broken feet of the statue.  But this speculation is totally irrelevant in the eyes of the judicial system.

What was relevant in this lengthy series of protracted court proceedings was that the statue became subject to Italian heritage law when it was brought ashore to Italy via an Italian flagged vessel.  It makes no difference (according to Italian law) whether or not the object had been plundered before a population had the benefit of experiencing enjoyment from it, and tfact that it didn't does not diminish the fact that the bronze is considered by the Italians to be part of Italy's cultural heritage under Italy's existing laws.

To read all of ARCA's posts on the Getty case, follow our link here.