In researching details related to the acquisition and current restitution of the 1st century Egyptian B.C.E mummiform coffin, inscribed in the name of Nedjemankh, I came across two other objects which show Christophe Kunicki's relationship as an advisor of ancient art purchases to the Metropolitan Museum in New York.

One of those objects is: 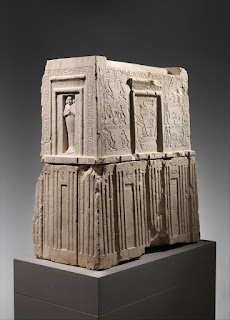 The provenance currently listed on the Metropolitan's website for the Monumental Stela of Kemes states:

Purchased February 1969 by Uwe Schnell, Germany, from Heinz Herzer Gallery in Munich. Purchased in the 1970s by a private collector (probably Serop Simonian, Hamburg, Germany). Published fully in 1994, exhibited in Bonn University Art Museum 2006 through at least 2008 and published in the catalog. Acquired by the Museum at auction Pierre Bergé, 2014.

A check of open source records using the names Ewe Schnell, Heinz Herzer and Pierre Bergé & Associés combined only turns up one other antiquity,  a panel painting of a woman in a blue mantle, which is also an acquisition within the Metropolitan Museum's collection.

Heinz Herzer, as many followers of our blog know, has his own interesting history in dealing with ancient objects with fabricated provenance.

Serop Simonian is an art dealer of Armenian origin, born in Egypt and a resident in Germany.  He's interesting in that he has stirred up quite a bit of controversy regarding his involvement with the disputed Artemidorus papyrus, which he managed to sell in 2004 for €2.75 million to the Compagnia San Paolo Art Foundation notwithstanding that some experts have ascertained that it is a fake.  As the statute of limitations on that piece ran out, Simonian was never charged.

On April 25, 2016 the Metropolitan's website for the Monumental Stela of Kemes stated the provenance as something quite different:

Believed to have been in the Todrous Collection, Luxor. Purchased February 1969 by Uwe Schnell, Germany, from Heinz Herzer Gallery in Munich. Purchased in the 1970s by the owner of the Tamerit Collection, Germany. Acquired by the Museum at auction Pierre Bergé, 2014.

This earlier collection history mentions a "Todrous Collection" of which there is nothing documented in open source records anywhere on the web for any other ancient objects.  A late antique textile fragment of a tunic with the inventory number T 34, from "the Tamerit collection" is on record at the at the Papyrussammlung der Österreichischen Nationalbibliothek at the Austrian National Library though not much else.

Christophe Kunicki's own dealer website listed the provenance as:

Stepping back even farther, outside of the museum's website, the Monumental Stela of Kemes was published in Volume 25 Number 5 of the journal Minerva: The International Review of Ancient Art & Archaeology.

This trade magazine listed the provenance as follows:

A rare Egyptian limestone chapel-stele of Kemes, superior of musicians (3), from the 13th Dynasty, circa 1770 BC (H. 73cm), in the form of a quadrangular naos resting upon a base carved with façades, was purchased from the Luxor dealer Tawadros during the 1960s. The cover-piece of the sale, it was estimated at €300,000-€400,000, but brought in a hammer price of just €200,00 from the Metropolitan Museum of Art. The expert for both sales was Christophe Kunicki.

Notice that the involvement of the French dealer Christophe Kunicki via Pierre Bergé & Associés in furthering this acquisition transaction does not appear in any of the Metropolitan Museum's provenance records for the 13th Dynasty Egyptian limestone chapel-stele of Kemes.  It only appears in the bimonthly trade rag for antiquities dealers.  Purchased on 21 May 2014 the Met's record also leaves out the "Luxor dealer Tawadros" connection on this object.  The name of that person is also the name associated on the  now restituted 1st century B.C.E mummiform coffin, inscribed in the name of Nedjemankh.

Note: Kunicki's website lists another egyptian object with the name "Habib Tawadros" giving us a another artefact linked to this mysterious Luxor dealer.

ARCA has notified the Egyptian authorities that this piece too may require closer examination.