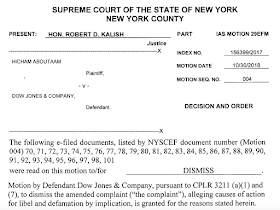 In July 2017 antiquities dealer Hicham Aboutaam sued the Rupert Murdoch-owned Wall Street Journal’s corporate parent Dow Jones & Co., in New York County Supreme Court over an article titled “Prominent Art Family Entangled in ISIS Antiquities-Looting Investigations” which was published in the Wall Street Journal on May 31, 2017 claiming his family's business and reputation had been damaged by the article written by WSJ reporters Benoit Faucon and Georgi Kantchev .  The journalists, who shared a byline on the article, were not named as defendants in the lawsuit.

In the filed 30 page complaint, Hicham Aboutaam as Plaintiff requested unspecified damages based on claims of libel and defamation.


In a ruling before the New York State Supreme Court, New York County, dated March 22, 2019 and filed today, Honorable Robert D. Kalish J.S.C granted the Motion of the Defendant, Dow Jones & Company, dismissing the complaint in its entirety.  The Court ruled that "the thrust of the article was that Plaintiff's family –"one of the most storied families in the international antiquities business"– is being investigated and scrutinized about the selling of looted antiquities and whether the family business is dealing in items looted by ISIS and then sold through dealers like Plaintiff and his brother Ali."

In making his ruling, Kalish added:

As the Court dismissed the plaintiff's causes of action for libel and defamation by implication, the Court did not address the Defendant's, Dow Jones & Co., argument that the Plaintiff failed to plead actual malice with regard to both causes of action.

In an email exchange regarding the Court's decision, Steve Severinghaus, Senior Director of Communications with Dow Jones stated "We are gratified by the court's decision to dismiss Mr. Aboutaam’s lawsuit against Dow Jones."


Suspect antiquities, traceable to ancient art sales through Hicham and Ali Aboutaam's companies have been written about with recurring frequency on the Association's blog.

It should be remembered that Hicham Aboutaam was arrested in 2003 for smuggling a looted ceremonial drinking vessel from Iran into the US, claiming that it had come from Syria.  Hicham pled guilty to the charges in 2004, paid a fine, and the vessel was returned to the Iranian authorities. As a result of that incident, Hicham Aboutaam stated that his conviction stemmed from a "lapse in judgment."

In the past, the Egyptian authorities accused Ali Aboutaam of involvement with Tarek El-Suesy (al-Seweissi), who was arrested in 2003 under Egypt’s patrimony law for illegal export of antiquities. Ali Aboutaam was tried in absentia, pronounced guilty and was fined, and sentenced to 15 years in prison in the Egyptian court in April 2004 after he was accused of smuggling artefacts from Egypt to Switzerland.  To date, Ali Aboutaam has not served any of the Egyptian sentence.

The Aboutaams voluntarily repatriated 251 Antiquities valued at $2.7 Million to the State of Italy in May 2009 when the objects were tied to one of Italy's most notorious smuggling rings.