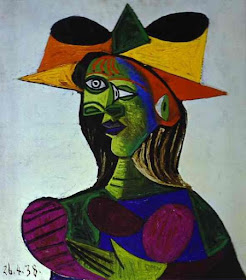 After negotiations that stretched from the UK, to the Netherlands and beyond, a Pablo Picasso portrait of photographer Dora Maar, stolen in 1999, has been recovered thanks to the work of private investigators.

Painted in 1938, Buste de Femme, is one of 63 known works in homage to Picasso's muse of nine years.  The artwork was stolen on March 11, 1999 from a 238 foot private yacht owned by the sometimes controversial Saudi billionaire Sheikh Abdul Mohsen Abdulmalik Al-Sheikh.  The theft occurred while his vessel, Coral Island, was harbored at Antibes on the Côte d’Azur in France undergoing refurbishment.

According to reports, just prior to its theft, the painting had been hung in the luxury vessel's primary living room, but had been removed temporarily from its pride of place and alarmed position while the room was being redecorated.  Packed precisely, it had been relocated to another locked room, placed carefully alongside a second artwork by Henri Matisse.  The Picasso was stolen, but the Matisse was not. And interestingly, the CCTV at the Antibes dock where the ship was moored, was conveniently malfunctioning.

The painting was eventually traced to the home of a Dutch real estate developer, who reportedly acted in good faith at the time of the purchase and was not aware of the theft.  In a post published on Twitter, Dutch art historian Arthur Brand released his own statement announcing his recovery along with a photograph of the artwork. 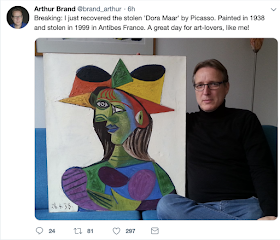 Speaking with the Dutch morning news outlet Volkskrant Brand said "Once people realize that it is a stolen thing, they want to get rid of it." ...“They don't dare go to the police, they are afraid of it being stolen or being arrested while they have nothing to do with it. And then they come to me.”

Less than a month ago, intermediaries brought the painting to Brand’s apartment in Amsterdam.  On hand was Dick Ellis, the retired founder of Scotland Yard’s art and antiques squad.  An ARCA trustee, Ellis now works as a private investigator, in this case representing the insurance company who legally owns the stolen Picasso.  A representative from New York’s Pace Gallery, where the painting had previously been purchased, was flown in to authenticate the painting at a high-security location in Amsterdam.

Police in France and the Netherlands have issued statements that they will not prosecute the painting's last owner as the artwork apparently changed hands several times over the waning years. As the painting was insured, it is now the property of the insurance company, who will decide what to do with it next.

Who ultimately gets to keep the artwork will depend on the policy-holder's "buy-back" rights, if he had any.  Buy back rights are specifically written clauses contained in property insurance policies that insure against physical loss or damage of high-value tangible property. In some cases buy-back clauses give the insured, in this case a private owner, first rights when in comes to buying the object back from the insurance company after having received a payout.


As has been the case in the past, high-value, high-portability and rapidly appreciating works of art that have been stolen and subsequently recovered often bring large sums when they are sold after their recovery.