4 of 6 individuals, believed to be tied to a Pink Panther operating cell, head to trail in the jewel heist at the Doge's Palace in Venice. 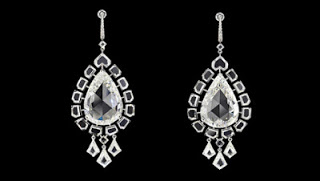 Following up on the museum jewel heist which occurred during the "Treasures of Mughals and Maharajas" exhibition at the Doge's Palace in Venice in January 2018. 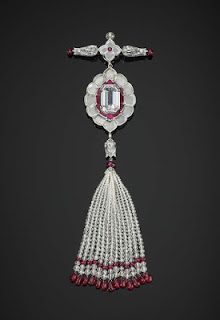 On January 3, 2018 jewelry worth an estimated €2m (£1.7m) was stolen from a display case at the museum palace of the Doge of Venice during a brazen, broad daylight, robbery which occurred shortly after ten in the morning on the last day of the exhibition. Taken during the theft were a pair of pear-shaped 30.2-carat diamond earrings in a platinum setting along with an equally weighty 10 carat, grade D diamond and ruby pendant brooch.  Both items belonged to His Highness Sheikh Hamad bin Abdullah Al-Thani, a member of the Qatari royal family, who is the first cousin of the current emir, Sheikh Tamim bin Hamad Al-Thani.

According to a report first published on Twitter by Mediaset Journalist Clemente Mimun, the Italian authorities had long suspected that the thieves behind the museum theft might have had inside help and were likely part of a criminal network made up of associates from the former Yugoslavia, sometimes referred to as "the Pink Panthers".  This network, working in small yet coordinated cells, are believed to be responsible for some 200+ robberies spanning 35 countries over the last two decades.  Some thefts, like that at the Doge's palace, have been discreet, 60-second affairs.  Others have been armed robberies or have involved automobiles being rammed into glass storefronts.  In total the thieves are believed to have made off with an estimated €500 million in jewels and gemstones, much of which has never been recovered.

But everyone knows that good police work sometimes requires patience.

Following months of investigations by the mobile squad of the Venice Police Headquarters and the  Central Operational Service of the Central Anti-crime Directorate of the State Police, working alongside prosecutor Raffaele Incardona, six suspects were ultimately identified by the Italian authorities. Between November 7 and November 8, 2018 five of these men, including four Croatians and one Serb, were taken into custody in Croatia in a coordinated action involving Police Directorates in Zagreb and Istra based upon European arrest warrants issued for the suspect's related to their alleged involvement in the Venice museum theft.

Five of those named by Italian authorities are believed to have visited the Doge's Palace in Venice on two test-run occasions prior to the actual theft.  Their first visit occurred on December 30, 2018 and their second on the day before the robbery.   Each time the team apparently tried to steal jewelry from the exhibition without success or were practicing in advance of the final event.

The brains behind the heist is purported to be 60-year-old Vinko Tomic, who goes by several other names, including Vinko Osmakčić and Juro Markelic.  No stranger to crime Tomic has already been connected with other million dollar hits.  Tomic has been implicated in the thefts of $1m worth of diamond watches in Honolulu, the heist of the $1m Millennium Necklace in Las Vegas, the filching of three rings, collectively worth £2m in London, and other high value jewel heists in Hong Kong, Monaco and Switzerland.

When appearing in court in connection with one prior offense, Tomic made a statement to the presiding judge that he was a war veteran originally from the area of Bosnia and Herzegovina who was wounded in battle in 1995 and who fled, first to Croatia and later to Germany.  There,  unable to find work, he stated he eventually turned to a life of crime, though he managed to provide for his family and put his brother through school.

For Italian law enforcement their biggest break in the case came as a result of a slip up on the part of the gang's leader.  According to chief prosecutor Bruno Cherchi, the Venice police chief Danilo Gagliardi, and Alessandro Giuliano, director of the Central Operational Service of the Central Anti-crime Directorate of the State Police, who spoke at a press conference on the investigation, officers identified a Facebook photo of Tomic wearing an identical ring to the one he was wearing when captured on CCTV footage at the Doge's Palace in Venice.

Zvonko Grgić (age 43) whose now static Facebook profile lists him as an armed security contractor available for global security around the world.

Želimir Grbavac, (age 48), who, according to Croatian news sources appears to have lived a discreet existence, operating an electrician business.

Tomic, Grgić, and Grbavac were arrested on Wednesday, November 7, 2018 in Zagreb, while Đurkin was brought in for questioning in Istria. Mladenović was initially apprehended near the Serb-Croatian border and detained in Croatian police custody, only to escape while in police custody via a bathroom window on November 8, 2018.  How this happened while he was in police custody has been subject to controversy.

On the basis of their European arrest warrants, three of the Croatians, Tomic, Grgić, and Grbavac were quickly transferred to Italy to stand trial.

Fighting his extradition, Vladimir Đurkin was finally transferred to the Italian authorities on February 8, 2019.  The presiding judge has ruled that all four defendants will remain in custody at the prison of Santa Maria Maggiore in Venice pending the outcome of their upcoming trial.

Serbian Dragan Mladenović and the final identified accomplice, Goran Perović, are believed to be in Serbia where they are untouchable by a European Arrest Warrant, a Convention which governs extradition requests between the 28 member states that make up the European Union (EU).  With no agreement between Italy and Serbia on judicial cooperation, there seems little chance that these two remaining accomplices will be extradited to Italy to stand trial.

International insurers Lloyd's of London has indemnified the Al Thani Foundation, as the owner of the stolen brooch and earrings and has paid out a claim of 8 million and 250 thousand dollars making the firm the owners of the jewellery, should they be recovered.  As a result, the insurers will likely become a civil party in the future trial of the alleged perpetrators.

Unfortunately the "Treasures of Mughals and Maharajas" have never been found.