Soft diplomacy, righting past wrongs and the Toledo Museum of Art 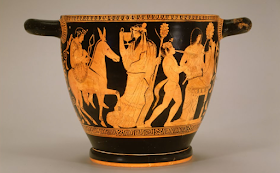 Over the past 12 years, in a differing tactic from the "Getty Bronze" protracted court battle for restitution, Italy's Avvocatura dello Stato has sometimes negotiated for the return of its stolen archaeological past utilizing soft diplomacy as an alternative to the more time consuming pressure of courtroom trials and appeals.  Geared toward stimulating mutual cooperation and in the vein of resolving cultural patrimony conflicts when illicit antiquities traceable to the country are identified in museum collections, Italian authorities have opened dialog with museum management at involved institutions in the effort to find mutually acceptable resolutions that sidestep the need for oppositional court battles.

In a tradition finessed by Francesco Rutelli, Italy's former Ministro dei Beni e delle Attività Culturali, the country's Avvocatura dello Stato, which represents and protects all economic and non economic interests of the State, works with museums to develop mutually-attractive accords which seek to remedy claims for looted antiquities.  These negotiations diplomatically address the sensitive issue of stolen, looted, and illegally exported acquisitions without subjecting museums to reputation damaging litigation and allow the State to achieve the return of cultural property while avoiding the uncertain outcome of a litigation on their ownership before a foreign court.

These collaborative negotiations are designed, not to strip a museum bare of its contested objects, but to undertake a careful collaborative approach to restitution in furtherance of “goodwill relationships” between source countries and foreign museums found to be holding illicit material. Equitable solutions, when agreed upon, have served to mediate past acquisition errors and have been carried out with important US museums such as the Metropolitan Museum of Art of New York, the Museum of Fine Arts of Boston, the Princeton University Art Museum, the J. Paul Getty Museum, the Cleveland Museum of Art and the Dallas Museum of Art and serve to strengthen the relationship between Italy and foreign museums in relation to future cooperative activities.

When consensus can be achieved, as was the case in 2006 when the Metropolitan Museum of Art signed an agreement in Rome to formalize the transfer of title to six important antiquities to Italy, long term loans can then be negotiated in the spirit of just collaboration.   Sometimes these agreements allow a contested object or objects to remain on display at the identified museum for a given period of time or provide for the loan of alternative objects "of equivalent beauty and importance to the objects being returned" so as not to decimate the museum's collection in return for an agreement of voluntary forfeiture and restitution of the looted antiquity in question.

This week, the thanks to just such an accord, the Toledo Museum of Art has announced that it has reached an agreement with the Italian authorities regarding a graceful 30 centimeter slip-decorated earthenware object, called a skyphos, or drinking vessel, which has been on view at the museum almost continuously since its purchase in 1982.  Etched in red against the a black background, this sophisticated antiquity was purchased for $90,000 with funds from the Edward Drummond Libbey Endowment and is decorated with the mythological story of the return of Hephaestus to Olympus riding a donkey and led by Dionysus.  The object dates to ca. 420 BCE  and is attributed to the Kleophon Painter.

Per the recent agreement with the Italian authorities, signed by Lorenzo D'Ascia, head of the legislative office of Italy's Ministry of Cultural Heritage and Activities, and state lawyer in service with the State Attorney General, who presides over Italy's Committee for the Return of Cultural Assets, this skyphos will remain on loan with the Toledo Museum of Art for a period of four years.  After four years the museum's management may request a renewal of the loan or request the loan of an alternative object from the Italian authorities as part of a rotational cultural exchange which is spelled out in the terms of their mutual agreement.

In its published announcement the museum acknowledged that the provenance of the object was called into question publically in 2017 by Dr. Christos Tsirogiannis, a forensic archaeologist affiliated with ARCA, on suspicion that the object had been looted and at some point illegally exported from the country of origin in contravention of Italy’s cultural heritage law (No 364/1909) "after which the Museum began an internal investigation and contacted the Italian authorities".


As mentioned in Tsirogiannis' academic article in ARCA's Journal of Art Crime "Nekyia: Museum ethics and the Toledo Museum of Art" the researcher recognized the Kleophon Painter skyphos from five images found within the dossier of photographs seized from Italian antiquities dealer Giacomo Medici.  At the time of Tsirogiannis' identification, the museum's published provenance history indicated only that the object had once been part of a "private Swiss collection".

Following several enquiries to the museum made by Tsirogiannis between March and April 2017, Dr. Adam Levine, Associate Director and Associate Curator for Ancient Art directed the researcher to the following limited collection history information for the skyphos: 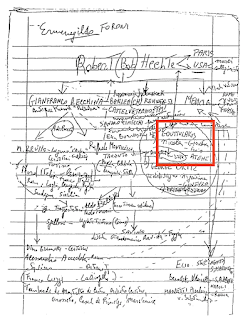 The now dead collector/dealer Koutoulakis is a name that immediately raises suspicions to those who research antiquities trafficking as his name is well documented in connection with the purchase and sale of other works of ancient art which have been determined to have illicit origins.   In an alternate spelling, as Nicholas Goutoulakis, this individual was implicated on the handwritten organigram seized by the Italian Carabinieri in September 1995.  This document outlined key players in the illicit antiquities trade in Italy during the 1990s.

Koutoulakis activities have also been mentioned on this blog in connected with the provenance history of another illegally-traded antiquity and is referred to 15 times throughout “The Medici Conspiracy,” a 2007 book by Peter Watson and Cecilia Todeschini which explores the roles of some of the most notorious bad actors in the world of ancient art.  One striking passage states that disgraced antiquities dealer Robin Symes confirmed that Koutoulakis was supplied by Giacomo Medici “since at Koutoulakis’ he had seen objects he’d previously seen at Medici’s.” (Page 198 : The Medici Conspiracy)

In this weeks announcement for the accord, the Toledo Museum of Art emphasized:

TMA is committed to the protection of cultural patrimony and to the responsible acquisition of archaeological materials and ancient art. Its collections management policy adheres to the strictest ethical guidelines, institutional transparency and professional best practices. TMA rigorously investigates the provenance of all new acquisitions and continues to research objects already in its collections that may have questionable provenances. The Museum has been proactive in resolving all ownership claims and welcomes new information on objects in our collections.

While this, two years in the making, cultural agreement should (rightly) be applauded as a positive step in the right direction in resolving Italy's ownership claim and in generating a positive stream of collaboration in a situation originating in controversy, it is just the first of many needed steps.  It is my hope that the administration at the Toledo Museum of Art will fully embrace and exercise its institutional responsibility to responsible acquisition, past and present, in the spirit of this cultural cooperation whether their acquisitions be by purchase, gift, bequest, or exchange.

Doing the right thing starts with museums acknowledging the need to return contested objects directly identified by researchers which match irrefutable photographic evidence of looting. But this is just a small part of establishing and/or enforcing an ethical collection management policy.  Not all suspect antiquities found within this or other museums come with disparaging confiscated photographic evidence in the form of archival records of former traffickers.  Some objects, equally attributable to some of the same trafficking networks come simply with a list of unprovable claims of provenance and scant documentation substantiating prior ownership or licit exportation.

It is these objects, the ones that do not pass the smell test, that must be rigorously and openly examined, to ensure their acquisition and accessioning is merit worthy, informed and defensible.  By addressing these "tween" objects, Toledo can truly earn international recognition by acting humanely, honourably and courageously in righting the wrongs of their past, and in doing so demonstrate a genuine commitment to their intention to preserve and safeguard material culture and addressing how museums have contributed to the phenomenon of the plunder.