The Italian Ministry of Cultural Heritage wants the Getty Museum to verify the origins of four more works of art which they have identified as being stolen or exported from Italy without an export license.

On Monday, December 3, 2018 Italy’s Court of Cassation rejected the J. Paul Getty Museum's appeal against the lower court ruling in Pesaro, issued by Magistrate Giacomo Gasparini.  That earlier ruling, issued on June 08, 2018, was in favour of the prosecution’s request for seizure of the bronze statue, commonly known as the Statue of a Victorious Youth or colloquially as the Getty Bronze, il Lisippo or l'Atleta di Fano.


This week, on May 22, 2019 the Comitato per il recupero e la restituzione dei beni culturali, the Italian Committee for the Recovery and Return of Cultural Assets, chaired by the Minister Alberto Bonisoli, met at the Collegio Romano and requested a meeting, as soon as possible, with the administration of the J. Paul Getty museum for a discussion on the return of the bronze statue to Italy, as sanctioned by a sentence of the Italian Court of Cassation as well as to discuss the status of an additional four works of art which the Italian authorities have identified as being stolen or exported from the territory of Italy without an export license.

Those four objects are:

An 1880 oil on canvas painting by Italian artist Camillo Miola known as the Oracle. 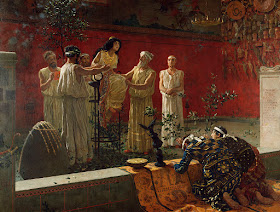 Miola was a scholar of classical antiquity and as a result almost all of his paintings represent subjects of Greek or Roman history known for his art criticism as much as his painting, writing under the pseudonym of Biacca. Miola was also an honorary professor of the Academy of Fine Arts of Naples. The artwork in question, depicts the Pythia sitting upon the sacred tripod in representation of the Delphic oracle. To the left is the Omphalos of Delphi, an ancient marble monument found at the archaeological site of Delphi which the ancient Greeks believed marked the city as the navel of the world.

The Oracle of Delphi was exhibited at the National Exhibition of Fine Arts: Turin in 1880 and later purchased by the Province of Naples in 1879.  In 1943, due to persistent bombing in the area of Naples during World War II, the Provincial Administration of Naples issued orders to remove works of art it owned from the city offices and to have 186 paintings sequestered at the Istituto San Lorenzo in Aversa, just north of Naples in a zone heavily contested by opposing military forces. Shortly after this mandate, sometime between 1943 and 1946 the artwork was documented as stolen.

According to the Bulletin of the J. Paul Getty Museum of Art (Malibu: 1959), pp. 20 and 22, these pieces represent grave lions executed in the second century CE in Asia Minor.  The provenance listed from the museum's website indicates that they were acquired from Nicolas Koutoulakis for $9,000 in 1958.

Photographic evidence from February 5, 1912, recorded in the archive of the Germanic Archaeological Institute of Rome, documents that these two lions once stood in front of Palazzo Spaventa di Casale di Scoppito in a small village six kilometers from L'Aquila, which was once part of the ancient Sabine city of Amiternum.

The now dead collector/dealer Koutoulakis is a name already mentioned in this blog as someone who raises suspicions to those who research antiquities trafficking as his name is well documented in connection with the purchase and sale of other works of ancient art which have been determined to have illicit origins.   In an alternate spelling, as Nicholas Goutoulakis, this individual was implicated on the handwritten organigram seized by the Italian Carabinieri in September 1995.  This document outlines key players in the illicit antiquities trade in Italy during the 1990s.

The Italian authorities contend these objects were exported from Italy without permission. 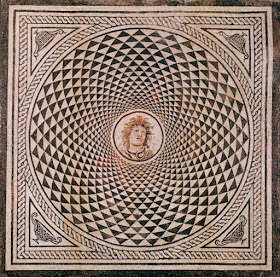 Getty records show that this mosaic floor was purchased from Jerome Eisenberg via Royal-Athena Galleries) for $15,000 in 1978, though the Italians state now identifies it as stolen from Italy.  Royal Athena Galleries has also previously acquired stolen antiquities, both from the Corinth Museum in Greece and antiquities stolen from Italian excavation warehouses.  These details and the fact that these earlier identified objects were later repatriated to Greece and Italy should have triggered some sort of increased diligence as to this mosaic's journey from discovery to the dealer's showroom.

Replying to an email inquiry on these objects initiated by Jason Felch, Lisa Lapin, Vice President of Communications for the J. Paul Getty Trust responded as follows:

"I understand you are inquiring about the latest activity related to the Getty bronze. Italy has asked for information and discussions about four objects acquired by J. Paul Getty in the 1950s and early 1970s.  We are thoroughly researching these objects and will discuss our findings in good faith with the Culture Ministry.  As always, we take these claims seriously.  As we have in the past, if any of these objects were stolen or illegally excavated, they will be returned to Italy.

The Getty has deep, strong ties with individuals and institutions throughout Italy that have produced many mutual benefits, and the Getty is determined not to allow a difference of opinion about ownership of the Bronze impede our warm and productive relationships.

In accordance with our 2007 agreement with the Culture Ministry, and consistent with our fiduciary obligations as stewards of the Getty collections, we are defending our ownership of the Bronze through the legal process, which is still ongoing.  We will take all available steps to assert our legal right to the statue, including potentially through the European Court of Human Rights.

The J. Paul Getty Museum has six months from the date of the final decision at the domestic level (generally speaking, the judgment of the highest court) to lodge its application regarding the Getty Bronze with the European Court of Human Rights should it decide to do so. After that period their application cannot be accepted by the Court.  To file they will have to allege that the court authority of Italy, which is bound by the Convention, in their opinion, has/have, through one or more acts or omissions directly affecting them, violated specific articles related to the European Convention on Human Rights.

Given that the Italian Court of Cassation issued its ruling on December 3, 2018, the museum would need to file its application on or by June 3, 2019.   In 2018 the ECHR ruled inadmissible or struck out 2256 applications involving Italy. It ruled on 27 applications alleging violations by Article/by State.