On July 01, 2019 ARCA was informed by Christos Tsirogiannis that he had identified a new potentially tainted antiquity scheduled to be auctioned by Bonhams auction house in London at its flagship London saleroom on New Bond Street on July 3, 2019.  This ancient Greek drinking vessel, has two faces looking in opposite directions, one of a satyr and one of a woman and has been identified as traceable to a document and photo within the confiscated Becchina archive and to two showroom photos found within the Symes-Michaelides archives.

Since 2007 Dr. Tsirogiannis, a UK-based Greek forensic archaeologist and lecturer with ARCA's Postgraduate Program in Art Crime and Cultural Heritage Protection, has worked to identify antiquities of illicit origin in museums, collections, galleries and auction houses that can be traced to the archives of individuals known to be involved in the illicit trade of antiquities. Tsirogiannis is also the incoming Associate Professor and an AIAS-COFUND Junior Research Fellow (2019-2022) at the Aarhus Institute of Advanced Studies at the University of Aarhus.
The kantharos Tsirogiannis identified is Lot 95 in the upcoming Bonhams auction.  It is an Apulian red-figure janiform kantharos which has been attributed to the Iliupersis Group, circa 375-350 BCE.

Vases made by the Iliupersis Painter's workshop were the forerunners to the later Apulian polychrome head vases that were produced throughout the second half of the fourth century before Christ in what is now Italy.  Yet a screenshot of the provenance/collection history listed by Bonham's is scarce and tells nothing about the vessel's discovery or its passage out of Italy.  In fact the auction house's collection history only goes back to 1991 when it appeared as Lot 161 in a Sotheby's New York auction via an anonymous seller on the 18th of June.  This and the mention of Merrin Gallery and an unnamed private collector are all the potential buyer has to go on.   No information is listed on the auction house's website regarding the ancient object's exportation from its country of origin or any checks possibly made with the Italian Carabinieri to ensure this object is not part of the Italian's known databases of suspect objects.

According to records reviewed by Tsirogiannis, a handwritten note in the Becchina archive, possibly written by Gianfranco Becchina himself, makes mention of a ‘janiform’ purchase along with other antiquities acquired via middleman Raffaele Monticelli.  The purchase price listed is 60,000 Italian lire and the sale appears to have occurred on March 5, 1988.  All the antiquities listed in this purchase acquisition from Monticelli total 290,000 Italian lire, with the kantharos being the most expensive ancient object in the transaction.

Raffaele Monticelli's role in the illicit antiquities trade is concretised in the now famous illicit trafficking organogram which mentions key individuals associated with Italy's largest known trafficking group.  He was convicted in 2002 and sentenced to four years imprisonment at the Foggia Tribunal for conspiracy related to the trafficking of antiquities.   His conviction occurred a little more than a decade after the kantharos appears to have surfaced in the US market in 1991. 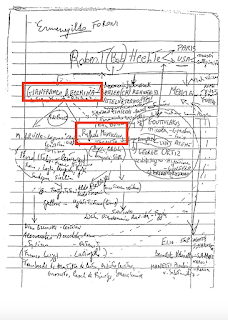 A retired elementary teacher, who gave up teaching for the more lucrative roll of middleman dealer, Raffaele Monticelli is a name well known to the Italian Carabinieri of the Cultural Heritage Protection Command of the Cosenza and Bari nuclei.  His most recent arrest occurred in 2017 in connection with clandestine excavations of archaeological sites in the Crotone area. At the time of the more recent 2014-2017 investigation, Monticelli's residence was searched and illicitly excavated objects were seized, including some ancient terracotta figurines and a biansata kylix of Greek origin. This new event shows that the trafficker continued to violate Italian law despite prior arrests and convictions well into his golden years.

But returning to the past and to the Bonhams kantharos currently set for sale later this week.

On the trafficking organogram Monticelli is listed just above the territories where he plied his trade: the regions of Puglia, Calabria, Campania, and Sicilia.  This illustrates that he was active in the region where this kantharos was likely produced.  The organogram also specifies that Monticelli was an important part of the Southern Italy cordata which lead upwards to Robert (Bob) Hecht via Gianfranco Becchina and downward to Aldo Belleza.

This connection is further confirmed by testimony given by Frédérique Marie Nussberger-Tchacos, after her arrest in Cyprus in 2002. Tchacos, who also goes by the name Frieda Nussberger-Tchacos, as well as by Frida Tchacos Nussberger, once oversaw the now liquidated Galerie Nefer AG and was once a member of the International Association of Dealers in Ancient Art (IADAA).  Speaking to Italian Prosecutor Paolo Giorgo Ferri, who issued the international arrest warrant for Tchacos and initiated the legal process for her extradition to Italy, Tchacos is quoted as having said:

“a precise triangle” referring to Bob Hecht, Gianfranco Becchina, and Raffaele Monticelli.  She further stated that Monticelli supplied “everything that could be found in the south of Italy; I think Apulian [vases], I think terracottas, I think bronzes. . . .” all of which turned out to be factually true.  Becchina's wife Ursula also affirmed that her husband obtained material from Monticelli.

Monticelli's relationship with Gianfranco Becchina was a lengthy and profitable one.

Among the 140 folders seized in 2001 from Gianfranco Becchina, there were many suppliers, some of whom were middleman and traffickers in direct contact with those who excavated clandestinely, as well as some tombaroli who communicated directly with the Sicilian dealer.  Becchina's confiscated records contain four folders cataloging his transactions with Monticelli, many of which contain long lists of objects as well as some Polaroids such as the one depicted to the right, from which Tsirogiannis made his matching identification.

This photo depicts the kantharos unrestored, with a large chip in the rim and still covered with incrustations.  It appears to be standing on a wooden shelf in front of a barren concrete wall, possibly at Becchina's warehouse in Basel, or perhaps in a restorer's laboratory and in its entirety also depicts additional objects which have yet to be identified and may be in circulation on the market.

At some period after the object's restoration two photos of the kantharos are taken.  These are found in the Symes-Michaelides archive.  The photos showing the front and back of the object post restoration, and in keeping with the state of conservation found in the Bonhams auction photos as illustrated below.

As is often the case with objects originating from these known dealers and middlemen one is curious as to the extent of the documentation, if any, was used by Bonhams to evaluate whether or not this particular ancient object had legitimacy on the ancient art market.

During past criminal proceedings then prosecutor Ferri spoke of the Becchina-Merrin relationship believing their involvement could possibly be part of a broader conspiracy to traffic in artifacts that involved the Americans then on trial.  As evidence lending credibility to his statement, a 1993 fax within the Becchina dossier from the Merrin Gallery to Becchina requests that photos of artifacts sent by the disgraced dealer to the Manhattan firm, used to show to potential customers, not be marked with "BEC."  In addition to that other artifacts which have been repatriated to Italy after being tied to Becchina also on occasion passed through the hands via this Manhattan gallery.  Some, later deemed illicit, were sold to various U.S. museums, including the J. Paul Getty in Los Angeles.

Shouldn't the lack of any known provenance before 1991, coupled with the name Merrin Galleries drawn some amount of cautious attention?  Curiosity?  Additional due diligence?

In my own curious searches in completion of this blog post, I asked Tsirogiannis at 07:52 this morning to look for the following object sold by Christie's auction house on June 4, 2008 in the confiscated archives. 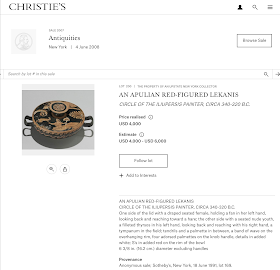 This Apulian red-figure Lekanis, drew my attention for its equally spartan collection history but more importantly for the fact that it appears to be by the same workshop, that of the Iliupersis Painter and was aparently sold during a very active period with this particular trafficking band.

By 11:37 Tsirogiannis had found and I have confirmed, what appears to be a second matching object within the Becchina dossier, albeit the Christie's photo shows some overpainting. My impression that the red-figure Lekanis didn't pass the sniff test proved accurate.  According to Tsirogiannis' review, this antiquity comes from the same group of objects that Becchina bought from Monticelli on, you guessed it March 5, 1988!

Could this come from the same find spot?  Could Merrin have bought more of these objects from Becchina? 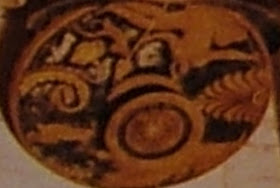 Let's hope that both auction houses will look into the records of the dealers consignors and purchasers affiliated with these objects.  While the Lekanis has long since been sold, it should be traceable to the current purchaser.  The second should be withdrawn from the London auction to allow the Italian and British authorities sufficient time to conduct a thorough investigation.

NB:  All Identifications have been submitted to the appropriate legal authorities.