On the 50th anniversary, a tale of two Caravaggio (thefts) 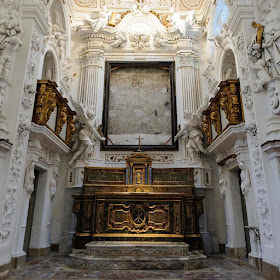 50 years ago today, in the evening hours between the 17th and the 18th of October 1969, Caravaggio's magnificent masterpiece, "Nativity with St Francis and St Lawrence", was lost, possibly forever.  The masterpiece was stolen with unprecedented ease from the Oratory of San Lorenzo in Palermo.  It is believed to be the only painting the mercurial artist painted in Palermo during the nine months he spent in Sicily.

Michelangelo Merisi de Caravaggio's successful artistic career was the product of his refusal to follow the conventional artistic styles of the time, focusing rather on realistic, and symbolistic detail, condensed into some of the most detailed and vivid biblical scenes.  His artistic fame, regrettably, was also accompanied by his irascibility and an unpredictable and violent temper, which frequently got him in hot water and may have significantly shortened his lifespan.

On the day of the Palermo heist, thieves entered the oratory through a poorly locked side door and cut the large painting from its frame, rolling it up and carrying it away.  Vanishing without so much as a trace, the famous theft has been the subject of much speculation and an occasional purported sighting.  Some say the painting is (still) with the mafia, others have testified it was destroyed.

In a recently released video fragment, published earlier in September by the Guardian newspaper, Monsignor Rocco Benedetto, the pastor of the Oratory of San Lorenzo at the time of the theft, is recorded saying he was contacted by letter on two occasions by the painting's thieves.  The first letter he received appears to have been a simple query, asking the monsignor to follow specific instructions and to publish an announcement in the newspaper.  The second letter was more ominous and reportedly contained a slice of the stolen painting to prove to the church that the people sending instructions actually had the painting.

This brief video clip, likely part of a longer interview, was filmed by Massimo D'Anolfi in 2001, given as part of a planned future documentary on the stolen works. Some of what Benedetto describes happened in 1969 would repeat itself in 1984 when a second Caravaggio was stolen, this time in Malta.


But, after 50 years of waiting for the return of one of Caravaggio’s greatest masterpieces,  some may wonder if there is any hope at all that the painting will be recovered.  Some are cynical, but ARCA remains hopeful, and invites our readers to remember a second stolen work by the Italian master Caravaggio which had a happy ending.


On New Year's Eve in 1984"St Jerome Writing" was also cut from its frame and stolen from the Oratory of St John's Co-Cathedral in Valletta, Malta  Held for ransom it was later recovered with the help of Fr. Marius Zerafa, a Maltese Dominican and former museum director.  He recounts his nerve racking involvement as the unintentional intermediary between the thieves and the Maltese authorities they were extorting in his book "The  Caravaggio Diaries."

Like in the Palermo theft interview, Fr. Zerafa received a letter, though not through the post.  His was delivered by hand, when a young man approached the father and quickly passed him an envelope. Inside, along with a letter, was a shocking polaroid image which depicted the church's precious Caravaggio spread out on a table, held in place with an Italian espresso coffee pot.  The thieves demanded a ransom for the Maltese Caravaggio's return and would go on, just like in the Palermo case, a sliver of the stolen St. Jerome to prove they meant business.

Thankfully, with the help of Zerafa and law enforcement, the painting was recovered.

If you want to read the whole story of the Caravaggio theft from St John's Co-Cathedral in Valletta, Malta, stay tuned.  Fr. Zerafa's out of print book will soon be republished by ARCA.
at Friday, October 18, 2019
Share