Dear Christie's: What's the story on your provenance on this antefix?

An interesting antefix has been published with Christie's as part of their December 4, 2019 sales event which deserves a closer examination regarding its legitimacy on the ancient art market.  For those who do not know, an anteflix is an upright ornament, used by ancient builders along the eaves of a tiled roof to conceal tile joints.

The provenance for the antiflix is listed as follows:

While not specified in Christie's very brief collection history, Ingrid McAlpine was the wife of Bruce McAlpine, husband and wife proprietors of McAlpine Ancient Art Limited in the UK. 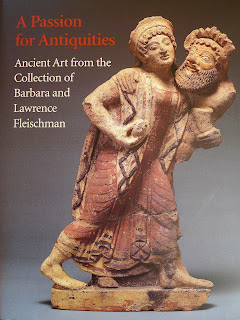 While not completely identical, the soon to be auctioned anteflix on consignment with Christie's, closely resembles another ancient Etruscan antefix in the form of a maenad and Silenus.  This one once graced the cover of the exhibition catalog "A Passion for Antiquities: Ancient Art from the Collection of Barbara and Lawrence Fleischman."   That South Etruscan, 500-475 BCE, terracotta and pigment antiflix was purchased by the J. Paul Getty Museum from the Barbara and Lawrence Fleischman collection via Robin Symes for a tidy sum of  $396,000 and exhibited at the Cleveland Museum of Art in 1995.  Later, in 2007, that antiquity would be relinquished to Italy by the J. Paul Getty Museum after the antefix was matched to a Polaroid photo recovered during a 1995 police raid on warehouse space rented by Giacomo Medici at Ports Francs & Entrepôts in Geneva. 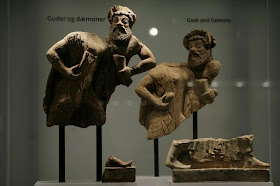 The Christie's auction antefix also closely resembles another pair of suspect terracotta and pigment antefixes depicting a maenad and Silenus.  This grouping was once on display at the Ny Carlsberg Glyptotek museum.  Like with the J. Paul Getty purchase, an image of the Copenhagen antefix showing a fragmentary antefix were matched with photos in the seized Medici dossier.  As with the Getty terracotta, this object too was eventually restituted to Italy.

Bruce McAlpine's name also comes up with other illicit objects later identified as having been laundered through the licit art market which were later assessioned into a collection at a prestigious museum.  An Attic black-figured hydria (no.3), once on display at the Museum of Fine Arts in Boston came through McAlpine via Palladion Antike Kunst, a gallery operated by Ursula Becchina, the wife of Gianfranco Becchina.  In addition, the Italian authorities working on these restitutions seized a copy of a letter, written by the staff of Bruce and Ingrid McAlpine Ancient Art Gallery dated 8 July 1986 which tied them to at least one transaction with Giacomo Medici via companies the disgraced dealer operated through third parties, fronts or pseudonyms. 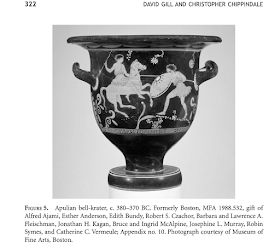 The names of Bruce and Ingrid McAlpine appear alongside Robin Symes AND Barbara and Lawrence Fleischman for the donation of an Apulian bell-krater to the Museum of Fine Art in Boston. This vase too was restituted to Italy in October 2006.

All of which leads to several questions

Why was Bruce Alpine's name and the name of his ancient art firm omitted from the provenance record published by Christie's ahead of the December 4th auction?


Was this omission an accidental oversight on Christie's part or an elective decision, perhaps as a way to reduce the possibility of the object's previous owners drawing unnecessary attention?


What collection history does the auction house have, if any, that predates the 1994 McAlpine acquisition date?

What steps, if any, did Christie's take to contact the Italian authorities , in order to crosscheck whether or not this object might or might not be acceptable for sale?