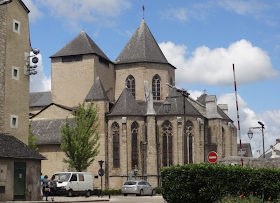 In the early morning of November 4th, robbers committed a smash and grab robbery at the Cathedral Sainte-Marie d'Oloron located in the town of Oloron-Sainte-Marie, in the Pyrénées-Atlantiques.  Awakened to the sounds of a Viking-inspired battering ram, nearby neighbors reported the ruckus to the local gendarmes who responded quickly, but not before the thieves had made their getaway. 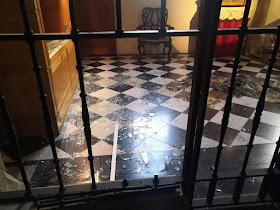 Upon arrival, law enforcement discovered that the culprits had used a tree trunk mounted onto a vehicle, to break open a small door to the right of the cathedral's main entrance.  Clergy from the 12th century UNESCO World Heritage Site have stated that the culprits then sawed through metal bars and broke into storage cabinetry, taking only things they could easily and quickly carry such as ciboriums, chalices, and cruets.  The accomplices, believed to be three men, abandoned the car used to break their way into the church, leaving the crime scene in a second vehicle.

Given the tools required to cut through metal bars and the time it would take to mount something on to an automobile to break through a solid door, it appears that the robbers were well prepared and knew precisely what they wanted to take and how they could gain entry into the historic church. 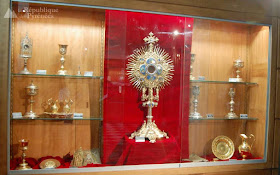 This morning, Hervé Lucbéreilh, the mayor of Oloron, spoke publicly about the attack.