The mysteries of the mysteriously appearing Klimt 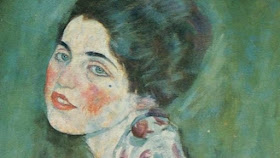 Painted by the Austrian secessionist Gustav Klimt (1862-1918), the only known “double” artwork created by the artist, "Portrait of a Lady," was discovered missing from the Galleria d'Arte Moderna Ricci Oddi, on February 22, 1997.  The painting's disappearance was strange, the frame for the artwork was found on the roof of the building, along with a potential fingerprint from one of the culprits, and yet, the Carabinieri estimated that the artwork was too large to have been pushed or pulled through the gallery roof skylight, so why was it found there?

Despite many leads, and talks with a local art thief who claimed he had stolen the original painting while it still hung in the gallery, replacing it with a duplicate,  the painting remained missing for almost 23 years. That is until it was found on the same grounds from which it disappeared.

During routine gardening, the artwork was found nestled inside a small metal cubby, attached the side of the gallery, in a location previously covered with ivy.  The fact that the painting appears to be in good condition, despite the humid environment makes in unlikely that it remained stashed in this hidden location for the duration the artwork has been missing. 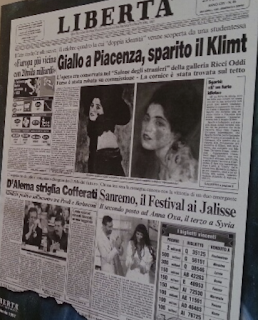 Once part of a large collection of artworks, amassed and donated to the city of Piacenza by a local noble, and art aficionado Giuseppe Ricci Oddi (1868-1937) in the early 20th century, the Klimt had been on display at the former Convent of San Siro in Piacenza and was in preparation for a temporary move to a new location near Piacenza’s City Hall while its home gallery underwent renovations.  It was during this period of movement that the original, or if the purported thief is to be believed, his copy of the artwork went missing.

Adding possible credibility to the informant's statements regarding a faked version of the artwork, on 1 April 1997, border police working on the Italian/French border at Ventimiglia intercepted a package addressed to the former Italian Prime Minister Bettino Craxi which contained a high quality forgery of the artwork. Why someone would be sending the disgraced former PM, a fugitive since 1994 in Tunisia, protected by Ben Ali's government was unclear.

Prior to its removal from the Galleria d'arte moderna Ricci Oddi the artwork had drawn considerable attention thanks to the sharp eyes of a young Italian woman named Claudia Maga.  She was the first to notice that the Piacenza artwork bore a close similarity to a second known Klimt artwork depicting an almost identical woman glancing over her left shoulder. That matching painting had not been seen since 1912 and the similarity of the two subjects portrayed, led scholars to consider whether or not "Portrait of a Young Lady" and "Portrait of a Lady" might in fact be one and the same. 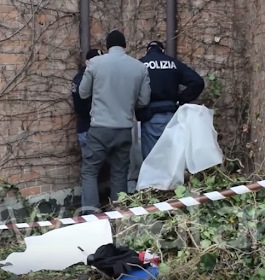 Yet, the Piacenza painting has some marked differences. The missing 1912 portrait depicted the woman with a hat and scarf, while the Italian-based portrait did not.  Proffering that perhaps the artist had reworked the first in favor of the latter, analytical studies were made using x-radiography at a local hospital which made it possible to examine the layers beneath the surface and to reveal more information about the composition beneath the portrait. These tests proved Maga's hunch was correct, yet why Klimt chose to rework the painting remained subject to speculation.

For now, the recovered artwork will undergo authentication, to determine of the painting found in the outer walls of the gallery is the missing artwork stolen more than two decades ago.  If it is, the next question will be where and with whom it really was for the bulk of the almost twenty-three years it was missing.