Five Masters Paintings, representing the GDR's largest art theft are finally coming home, but where they have been for 40 years and who was responsible for stealing them remains a mystery 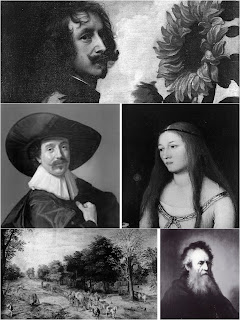 With their authenticity confirmed, five old masters paintings, "Portrait of an Old Man" from the Rembrandt workshop (probably Ferdinand Bol), "Country Road with Farm Carts and Cows" by Jan Brueghel the Elder, the "Half-length Portrait of an Unknown Man with a Hat and Gloves" by Frans Hals, "Saint Catherine" by Hans Holbein the Elder, and "Self-portrait with Sunflower" by Anthonis van Dyck, will each go back on display in Gotha, Germany, at the end of January.  The artworks were stolen from the Friedenstein Palace exactly four decades ago. .

The Dutch master works were stolen on a rainy evening between 13-14 December 1979.  During the burglary, which coincided conveniently with the yet untested installation of a new security system, a thief, or thieves, accessed the west wing of the historic palace using some type of crampons, to climb up a rain gutter attached to the side of the building.

Gaining entry via a second floor window, ten meters up the palace walls, the culprit(s) then are believed to have hand picked specific paintings, (having left other more valuable works behind) and then lowered the paintings back down the side of the building, before descending themselves and making their getaway through Gothaer Park where the baroque palace is located.   By the time the Gotha Volkspolizei (the city's People's Police) were alerted to the theft at 07:10 on the 14 December 1979, the perpetrators and the paintings were long gone.

But the crime scene is a puzzle.

While exploring the grounds of the palace, the park and the nearby surrounds, detectives found one crampon of the estimated 12-13 that were likely put into service to scale the building.  Made of a steel alloy that was only used in the West, questions abounded as to why the culprits would methodically removed all the other supportive devices, each weighing approximately 5 kilos,  which would have made carrying the 5 paintings all that more difficult. Was this left evidence meant to lead investigators astray by making it appear that the culprits who planned the theft were outside the GDR (German Democratic Republic)?  Likewise, the broken pane of glass in the entry window was broken in such a way as to have made it highly improbable that the thieves would have gained entry by reaching through the hole created.  There were also no scrapings from the paintings frames in the immediate area near the window and the crime scene appeared to mimic three earlier attempts to break into the museum in a very similar fashion.

Whatever the motivation, the one successful Gotha art robbery resulted in the largest art crime investigations in the history of the GDR.  Yet, despite the involvement of more than 100 detective officers as well as interviews with more than 1,000 people who lived and worked near the scene of the crime and the surveillance of individuals with connections to the Friedenstein Palace nothing was resolved.  Speculation abounded regarding whether the Stasi were involved and if the artworks had been transported to West Berlin via a truck from a nearby slaughterhouse.

Despite the seemingly thorough dragnet, and with little else to go on, the paintings were eventually listed in the loss catalog of the Schloss Friedenstein Foundation, and added to German the Lost Art database, the INTERPOL database of stolen works of art as well as the Art Loss Register.  But despite the widespread attention and extensive police investigations, the greatest art theft in the history of the GDR remained unsolved.

First reported on December 6, 2019. The paintings popped back on the world's radar in July 2018 when a broker, purporting to be acting on behalf of a group of anonymous heirs, contacted the German politician Knut Kreuch, Lord Mayor of Gotha, and then chairman of the Foundation Schloss Friedenstein Gotha.  Hoping to arrange a buyback for €5.25 million, the intermediary presented the mayor with an implausible story of the artworks' acquisition by the persons he represented.  Despite this, he piqued the mayor's interest when, during a meeting at city hall, he backed his story up by laying out a series of colored photographs depicting the front and the back of the paintings.  As all of previous images taken of the artworks were in black and white, this was the first genuine "proof of life" that the paintings still existed and might still be grouped together in spite of the decades that had passed since their original theft.

It should be noted that the Ernst von Siemens Art Foundation never purchases pieces directly from thieves, and in negotiating agreements the Holder has to reveal how they have come to be in possession of the artwork.

At this point, the EvS began working with the mayor and the holders of the paintings towards an agreement in which the "interim owners" would receive a "moderate allowance or a finder's fee," but if, and only if, the art works of art could be authenticated by the German authorities with the understanding that those who possess purchased goods in good faith (i.e. who don't know that it has been stolen) and that can be reclaimed on the basis of a right in rem (e.g. ownership) of a third party, are afforded protection against claims for return after a 30 year time period.  To date, no information was given publicly as to what the sum of that fee might have been,  and whether or not the fee was delivered.

After nearly two years of negotiations, on 30 September 2019, the paintings were relinquished voluntarily for authenticity  testing at the Rathgen Research Laboratory at the Staatlichen Museen (State Museums) in Berlin in cooperation with the Berlin State Office of Criminal Investigation.  Meanwhile, while prosecution against the original thief or thieves was time-barred, the Berlin public prosecutor's office began to apply alternative pressure.

The State Criminal Police Office (LKA) in Berlin, in cooperation with the federal state agencies concerned, opened an investigation into two individuals from Heidelberg and Jena, then aged 54 and 46, on suspicion of extortion. Given their ages, the two suspects, if found culpable, would only have been intermediaries after the fact, as they would have been too young at the time of the original crime to have been directly involved in the art theft.  Search warrants were also executed by the police on 5 December 2019 at the offices and apartments of three witnesses and two suspects including a lawyer from southern Germany and the residence of a doctor from East Frisia, perhaps looking for evidence which could demonstrate direct collaboration between the thieves and any subsequent handlers.

What can be ascertained is that the handlers, who alleged they had the pictures in their possession, could not rely on a simple defense of having acquired the artworks in good faith.  The theft of these paintings, as well as the Friedenstein Palace as their legitimate owner, were too well known.

The paintings will formally go back on public display at the Friedenstein Palace on Friday.