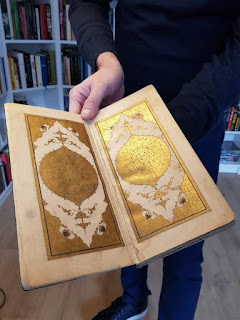 
Thanks to the ongoing work of private investigators and cooperating law enforcement, family heirs will soon have back a rare centuries-old Persian manuscript collected by their relative.  The 14th century text was stolen from the private possessions of Iranian art collector Djafar Ghazy, who had lived in Neuhausen, in the district of Enz in Baden-Württemberg in Germany until his death at 86 in September 2007.

While settling the estate of the lifetime bachelor, his remaining heirs discovered documentation attesting to the purchase of a valuable literary collection made up of numerous Persian and Islamic manuscripts.  In addition to sales documents, the family found a detailed computerized list of the items the collector had amassed over 45 years.  The manuscripts and books themselves, however, were nowhere to be found, apparently stolen by someone at some point prior to the elderly engineer's death.

Turning first to a German private investigator, Erhard Reuther, who in turn encouraged the family to file their complaint with his former employer, the Bavarian State Criminal Police Office (LKA), the investigation focused on two caregivers who took an interest in the reclusive man prior to his death.  Upon obtaining a court order in December 2011, the LKA searched the apartment and storage area of "Mohamad K." in the neighbourhood of Zamdorf near Munich.  Mohamed had befriended the collector and was known to have met him for coffee and to drive him to and from his doctor appointments.

At the culprit's home, hidden in bags and suitcases in a storage shed in the basement, law enforcement officers discovered a total of 174 books, drawings and manuscripts, some of them finely illustrated by hand with exacting imagery and fine gold leaf.  The nail on the thief's coffin: the seized objects, matched the computer inventory the collector had maintained, creating a smoking book, if not a smoking gun.  In total, the theft appears to have been worth some three million euros in assets.

Unfortunately, two important items were not among the stash seized by the German police.  One was a missing 14th-century manuscript containing the poetry of Hafez and another was an unnamed text the thief apparently sold through a London auction house for a million British pounds.  Elderly himself, Mohamad K's only alibi was to claim that Ghazy saw him as his son and had given him everything.  The prosecution thought otherwise.  At the conclusion of his trial in Munich District Court, the thief was found guilty, but given his advancing age, was given a shortened two year suspended sentence.

After the recovery, two magnificent copies of the Koran, willed by the collector in the form of a letter penned by Ghazy and slipped inside the books' cover, were bequeathed to the Bastan Museum in Tehran. These were then turned over to Abdollah Nekounam Ghadiri, Consul General of the Islamic Republic of Iran. Two other items, an astrological manuscript and a collection of poems by Ali Sirâsî, both from the 17th century, were gifted by the family to the Bayerische Staatsbibliothek (the Bavarian State Library) for their assistance in identifying and cataloguing the objects in their relative's collection.  The rest of the gentlemen's property was eventually returned to the collector's family in 2016, almost ten years after the collector's death, following a lengthy five-year follow-up to determine if any of the objects in Ghazy's literary collection were of illicit origin or had been reported stolen.

Yet from there the trail of the still missing Hafez Divān, went cold.

It has been estimated that there are at least 1,000 originally transcribed manuscripts of Hafez's poetry in Iran and other parts of the world, though not all represent the poet's complete Divān. The earliest known version is held in the al-Beruni Institute for Oriental Studies collection at the Uzbek Academy of Sciences, in Tashkent, of the Republic of Uzbekistan. It is dated 803 (1400-01) and was copied by Borhān b. Ḡiāsò Kermāni.

Known by his pen name Hafez, Khwāja Šamsu d-Dīn Muḥammad Hāfez-e Šīrāzī, (c. 1320-1389), the poet was a Sufi Muslim honoured for his mastery of Persian ghazals, which constitute the bulk of his compendium, Divān.  Believed to be the pinnacle of Persian literature, in literary circles, his works are considered to be one of the seven literary wonders of the world and as a writer and poet, he has achieved iconic status as a symbol of Persian cultural and literary identity.

Translated into English for the first time by Sir William Jones in 1771, Western writers and philosophers, such as Ralph Waldo Emerson and Johann Wolfgang von Goethe, Friedrich Wilhelm Nietzsche, and even Arthur Conan Doyle, each in their own way paid homage to the historic Iranian writer's works.  This despite the fact that the poet's controversial verse covers everything from the hypocrisy of holy men and authorities, to love, and even the consumption of alcohol.

This is because Hafez's words occupy a particularly hallowed space in Iranian culture, and has for centuries.  Faced with a difficult situation or decision, some Iranians are known to turn the Fal-e Hafez, a cultural tradition that roughly translates to divination via Hafez. As part of this tradition, a reader asks Hafiz, the Lisan al-Gaib, as the voice from the outer world, for his advice at an important juncture or perhaps for guidance during a dilemma in their life.


To find where this Persianate manuscript had gone, the relatives of Ghazy also tried their luck by posting advertisements in German newspapers.  In them, they listed a reward of 50,000 euros.  But it wasn't until the end of 2018 when Arthur Brand, a Dutch private investigator specializing in art recovery, received a solid tip through a German art dealer of Iranian origin.  From there the trail began to look promising.

Working a series of leads that lead him from Europe to the UK, Brand came to learn that the bound manuscript had been purchased in 2011 while the stolen text was still in Germany.  Acquired by a now deceased dealer, who in turn sold the text to an important collector of Persian ancient manuscripts living in England, the manuscript appeared to have travelled from the UK back to Europe briefly, when its last buyer, confronted with the problematic nature of his purchase, wanted to get his money back.

Through a series of exchanges, Brand was able to convince the collector to relinquish the important manuscript which measures 21 x 13 cm and contains 159 handwritten pages. The words of the poet are delicately transcribed by the prominent scribe Shaykh Mahmud in 867 (1462.3), was possibly commissioned by the Qara Quyunlu ruler, Pir Budaq to write down the author's words shortly after the poet's death.


Brand will now transport the rare transcription back to the German authorities, where it will then be returned to Ghazy's heirs. Speaking with Arthur Brand this evening about the forthcoming restitution, the art investigator stated "I would like to give special thanks to William Veres who again was crucial to this object's recovery."  The London based, Hungarian-born antiquities dealer has also provided credible assistance to Brand on the recovery of the ring once owned by Irish poet and playwright Oscar Wilde.