One Step up the Looting Pyramid

To some individuals, the scandal surrounding the Met’s 1972 purchase of the Euphronios krater and similarly shady procurements by some US and European museums seems like old news.  For others, like Italy’s Soprintendente per I Beni Archaelogici dell’Etruria meridionale, Alfosina Russo Tegliente and the Villa Giulia’s scientific experts Daniela Rizzo and Marizio Pelligrini, the watershed accord signed in February 2006 between the Metropolitan Museum of Art and the Italian government, which returned this spectacular vase to Italy, was just the tip of a very large iceberg.

Returned to Rome in 2008 after a protracted return-plus-loans agreement, the Euphronios krater, with its delicate images of the dying Lycian king, Sarpedon, leader of the Trojans' allies and offspring of the god Zeus and the mortal Laodamia, has become the poster-child example of bad museum acquisition practices.

I visited the Musei Nazionale Etrusco di Villa Giulia on the opening day of their new exhibition, I Preditori dell’Arte e Il Patrimonio Ritrovato…le Storia del Recupero (The Predators of Art and Rediscovered Heritage - The History of Recovery), running in Rome from September 29th through December 15, 2012.

I didn’t come to see the Euphronios krater.   Near perfect in its restoration, it is housed in a discreetly simple glass case, approachable on four sides, located on the second floor of the villa in a section reserved geographically for artifacts from Cerveteri.

I didn’t come to see the Fifth-century BC Attic red-figure kylix, a cup also signed by Euphronios as potter and painted by Onesimos with scenes of the Trojan War.  This fragmented cup sits in its own glass case, alongside the krater.  It too was surrendered by a US museum -- the J. Paul Getty Museum in 1999.

I came to see the new exhibit, one that follows the “long and silent journey” to use the words of the curators, of not just these two objects but approximately ninety others on exhibition at the museum, which have been returned to Italy, due in a large part to the doggedly difficult work of Daniela Rizzo and Marizio Pelligrini, Villa Giulia’s scientific experts.  Their work and the work of the staff of the Soprintendente per I Beni Archaelogici dell’Etruria meridionale, Italy’s public prosecutors, and the Italian Carabinieri along with collaboration from the Swiss judiciary helped reconstruct the chain that created a buyer’s market for looting of archaeological sites, in Italy and elsewhere. This exhibition is the fruit of their labor and underscores the material and intellectual consequences of contemporary collecting.

Tracing the collection life of these objects, from tomborolo to trafficante (tomb raider to trafficker) the exhibit shows not only the route these objects took before arriving in some of the world’s finest museums but also examines some of the methods used by traffickers to launder looted antiquities through the world’s most important auction houses. 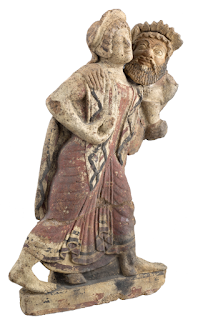 Included in the exhibition is an Etruscan antefix in the form of a Maenad and Silenos dancing.  An anteflix is an upright ornament used by builders along the eaves of a tiled roof to conceal tile joints. This particular anteflex, pictured on a now famous Medici polaroid, was acquired by Barbara and Lawrence Fleischman through Robin Symes and then acquired by the J. Paul Getty Museum in 1996.

Once it even graced the cover of an exhibition catalog highlighting the Fleischman’s collection.  The presence of the anteflix in The Villa Giulia exhibit serves to illustrate how museums, private collectors and auction houses have allowed themselves to be links in the looting chain. 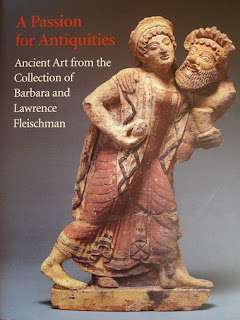 To many of the exhibit attendees in Rome, seeing this simple household decoration as part of this exhibition is equal parts joyous victory and painful reminder.  As I mentioned in the start of this article, having these objects come home is just the tip of the iceburg, or to use Daniela Rizzo’s words who spoke with the visitors about her work, “the first step of the Pyramid”.

When the Italian Carabinieri raided Giacomo Medici’s warehouse in the Geneva Freeport they recovered 3,800 objects and more than 4,000 photographs of objects that had previously passed through Medici’s hands. (Watson and Todeschini 2007, 19-24, 48-79, 363-83).  The recovered items in this exhibition represent only a small fraction of the objects looted by just one organization of traffickers.  Imagine how many more are out there. 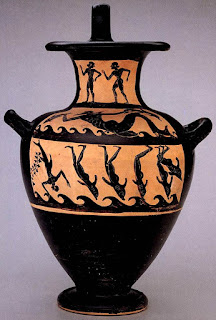 Some museums, through cooperative agreements with Italy and or law enforcement organizations in their own countries, readily relinquish artifacts whose origins can be traced back to the looters through the documentation of the Medici and Becchina dossiers.  Others take more insistent prodding.

It wasn’t until June 20th of this year that the United States Attorney’s Office for the Northern District of Ohio issued a press release stating that an agreement had finally been made with the Toledo Museum of Art in conjunction with a Federal Verified Complaint in Forfeiture to return a 510 B.C. Etruscan black-figure kalpis attributed to the Micali painter or his workshop.  This despite being presented with a copy of an incriminating polaroid, seized from Medici during the 1995 raid showing the still mud-encrusted pot and another polaroid from a separate raid in Basel 2002 proving that  the kalpis had also passed through the hands of Gianfranco Becchina.

One more step up the pyramid.  One more long and necessary step.