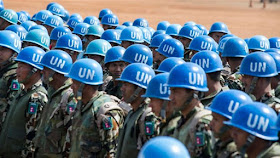 During the joint UNESCO - Italy press conference in Rome this morning a new task force has been formalized to create an international training center for the Blue Helmets for Culture (Italian: 'Caschi Blu' della Cultura).  This body of officers will be tasked with the protections of the world's cultural patrimony.   The agreement was signed at the city of Rome's Baths of Diocletian in the presence of the Mayor of Turin, Piero Fassino, Italy's Foreign Minister, Paolo Gentiloni, Italy's Minister of Culture, Dario Franceschini and the director general of UNESCO, Irina Bokova.

Working with a mixed composition of specialized personnel including approximately 30 civilian experts (historians, scholars, restorers of the Central Institute of Restoration in Rome and the Opificio delle Pietre Dure in Florence) and 30 officers from Italy's art crime squad, the Carabinieri per la Tutela del Patrimonio Culturale the training center will be based in Turin and called "ITRECH" (International Training and Research Center of Economies of Culture and World Heritage).

Earlier this week Bokova stated that “the establishment of a Task Force bringing together cultural heritage experts and the Italian Carabinieri force specialized in the fight against the illicit trafficking in cultural property will enhance our capacity to respond to future emergencies.”

The project will be located at the city of Turin's Campus of the United Nations and will serve to build capacity by assessing cultural heritage risks and quantifying damage.  It will also work to develop action plans as well as towards providing technical supervision and training to local national staff of countries in conflict.

The Blue Helmets for Culture Unit will also assist in the transfer of movable heritage to safe zones  when and where possible and will work to strengthen the fight against looting and illicit trafficking of antiquities. The overarching goal of the initiative is to protect cultural and religious pluralism within a framework of international action to combat terrorism.