This spectacular theft occurred at the Van Gogh Museum in Amsterdam during the predawn hours of Sunday, April 14, 1991.  It is considered to be the largest art heist in the Netherlands subsequent to World War II, as well as the fastest recovery time for stolen works of art from an important collection.

Twenty paintings by the Dutch master Vincent van Gogh, including one of his iconic Still Life: Vase with Fifteen Sunflowers (1889) were stolen from the museum by thieves; one who concealed himself in the gallery the previous evening and another, who was let his accomplice into the museum during the theft.

At the time of the robbery, the value of the stolen art was estimated at USD $500 million.

Listed below are all the artworks taken during the theft, some with photos. 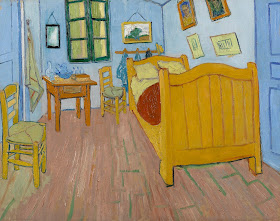 Wheatfield with Crows, 1890
oil on canvas, 50.5 cm x 103 cm
Completed in the French village of Auvers-sur-Oise just one month before Vincent committed suicide on the 29th of July in 1890 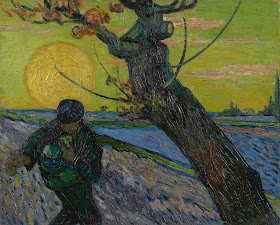 The Potato Eaters, the final version, 1885
oil on canvas, 82 cm x 114 cm
Completed in his hometown of Nuenen 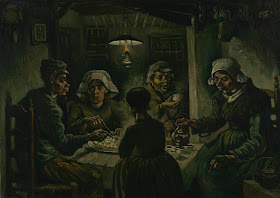 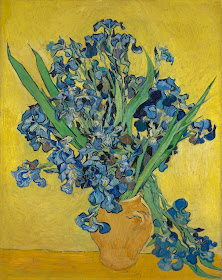 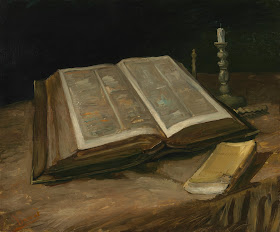 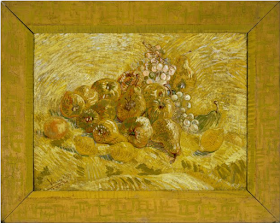 Field with trees, the Château d'Auvers, 1890

Wheatfield with a Reaper, 1889

At the time of the robbery, two night watchmen heard sounds coming from inside the museum at approximately 3 AM local time, indicating that there was in intruder in the building.  Upon investigating, they were confronted by a man brandishing a pistol and wearing a balaclava to disguise his face.  This individual then forced the guards to disable the museum's security devices and allowed his accomplice access into the museum.

Both thieves then reportedly confined the guards before setting about removing the twenty works of art.  In less than an hour they had filled two expandable garment bags to the brim with the Dutch Post-Impressionist artist's works.  The criminals then used one of the guards cars as their getaway vehicle, scrunching all the artworks inside before hopping in with them to make a fast get-away.

At 4:48 am, one minute after the thieves departed, the guards called-in the robbery to Amsterdam authorities. A grey Volkswagen Passat, matching the description of the guard's stolen car was located unlocked and abandoned at the site of the Amstel train station at 5:23 A.M.  A search of the car, revealed that all the paintings were accounted for, all still stuffed into the garment bags the thieves had used when removing them from the museum.

Three paintings, including Wheatfield with Crows, were severely damaged.

Three months later, on July 18, 1991, authorities announced that they had arrested four Dutchmen for their roles in the botched predawn April robbery. One of the four men charged turned out to be one of the two security guards working inside the museum at the time of the theft.   A second accomplice was a former employee of the museum's security firm.  The two remaining joint principles to the crime were the apparent masterminds, each of whom had made promises to the museum insider and former contractor that they would receive a substantial fee for facilitating the robbery.

Subsequent to the arrests, police stated the thieves had abandoned the paintings in the guard's car and fled the scene when their second get-away vehicle failed to arrive, apparently due to a flat tire.