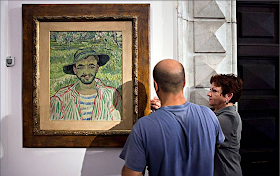 On May 19, 1998 Rome's prestigious Galleria Nazionale d'Arte Moderna was robbed just after the 10 pm closing time. Armed with guns, three thieves entered the museum just before closing time. Moving about the galleries barefoot and having donned gloves and balaclavas to hide their identities, the thieves then stormed the control room.

There they gagged two of the three female guards and forced a third to disable the museum's security system and hand over its accompanying CCTV footage. They then locked all three security staff in a bathroom before proceeding to the Impressionist hall.

Once in the painting's gallery, they bypassed paintings by Edgar Degas and Gustav Klimt and stole three specific paintings: 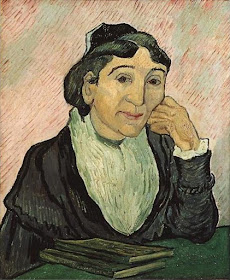 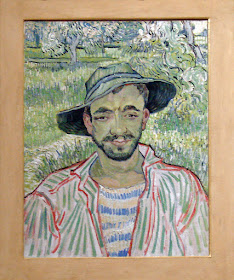 Cabanon de Jourdan, 1906
by Paul Cézanne
oil on canvas 65 x 81 cm
The last artwork completed by the artist before his death in Aix-en-Provence 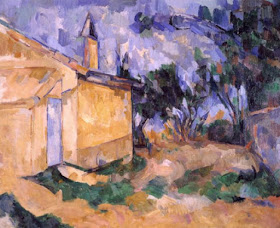 From start to finish the art theft lasted only 15 minutes.

From the beginning of their investigation art crime detectives in Italy suspected that there had to be an insider working with the thieves; someone who had firsthand knowledge of who would be working in the museum that evening and possibly familiarity with the museums security apparatus.

Law enforcement officers with the Carabinieri Tutela Patrimonio Culturale and the Squadra Mobile di Roma began their investigation by conducting a prolonged examination of all 160 individuals who worked at the museum.  They needed to narrow down who might be inclined to collaborate with criminals or who might benefit from the proceeds to be made from stolen art.

Tentative suspects were kept under surveillance and as the squad honed in on each of their culprits, phones were tapped.  Police bided their time for more than a month listening and analysing information as they gathered evidence on who and how many people were involved and most importantly, just where the paintings might have been stashed.

While they waited, they learned that some of the suspects had met one another serving time in a Brussels prison, one of them for a violent robbery of a postal truck. This further helped to paint a clear picture that the group was not beyond the use of violence.

Proceeding carefully officers were sure that the theft was not merely an opportunistic crime by an impulsive group but a crime carried out by a individuals who knew one another well and who weren't afraid of getting their hands dirty.

As days passed the thieves faced difficulties finding a buyer.  The criminals began to get irritable and at one point started fighting amongst themselves.  In one instance one of the suspects was so sloppy that he openly complained during a tapped phone conversation that he knew the police were on to them.

As the band of criminals began to fray law enforcement knew they had to move quickly before they completely unravelled and did something desperate.  The investigators' intel also revealed that the paintings had been split up. Van Gogh's Le Jardinier and Cézanne's Cabanon de Jourdan had been brought back to Rome after the purported sale fell through, while L'Arlésienne was left behind in Turin possibly as collateral for the one criminal not originally from Rome.

After 48 days, investigators decided they had sufficient evidence to identify probable locations for the three paintings and the ability to make simultaneous arrests of all accomplices at the same time.  This was done to ensure that no one got away and that no one could shift the artworks to a new hiding spot or destroy them to avoid prosecution.

On July 5, 1998 officers moved in and arrested 8 suspects, some with a small arsenal of firearms. The motley team was a hodgepodge of run-of-the-mill criminals including a husband and wife team, one of whom was the insider at the museum.  Others in the band seemed the type only Hollywood characters are made of.

During a raid of one apartment in the periphery of Rome Van Gogh's Le Jardinier and Cézanne's Cabanon de Jourdan were recovered in good condition One painting had been crudely packaged in a cardboard box and hidden under a bed. The other had been wrapped in a blanket and stuffed in a closet.

L'Arlésienne was recovered in an apartment in Turin along with 6 weapons, including a machine gun.

The criminals convicted and their sentences imposed