A film about the king of counterfeiters, Forger Eric Hebborn

Those who study art crime already know about the mysterious death, on a rainy morning in Rome, of the king of counterfeiters, art fraudster Eric Hebborn.   But was his death at the hands of the Mafia, poor drunken coordination, or, a lack of follow-up care at the hospital?  How the famous forger died has long been debated, despite evidence pointing clearly to the latter.  Splashed across art newspapers and major news outlets this weeks, articles are popping up about an upcoming ambitious TV drama that is set to highlight the famous con man and the suspicion of mafia involvement in his 1996 death in Trastevere.

But just who is Eric Hebborn and how did he die?

Eric Hebborn was a wiley and talented artist, who got his first taste for paintings fraud creating pencil drawings of Augustus John based on a drawing of a child by Andrea Schiavone.  Plying his trade at important London galleries, once exposed he admitted to having created numerous fake works of art, some of which he passed off as Rubens, Breughel, Castiglione, Corot, Mantegna, Piranesi, Schiavone, and even van Dyck.

Many of the works Hebborn created came from the study of known, extant paintings from famous artists which he then recreated, passing his own art off as preparatory drawings for already known and renowned paintings and artists.  Making a healthy living with his artful deception, Hebborn was ultimately undone when the London art firm Colnaghi realized that the Pierpont Morgan “Cossa” they had purchased from him turned out to be identical to the National Gallery’s “Sperandio”.   With a little more digging it turned out that the “Sperandio” too was obtained from Hebborn. 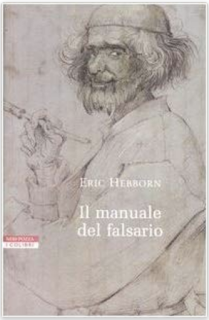 At the time of his death in 1996, the by-then-retired con man was considered to be one of the world's most prolific, as well as mouthy, art forgers in history.  Bold even in self-admitted guilt, he expressed no regret for his actions.

As if to poke the art world in its pompous eye, Hebborn celebrated his prowess by penning Il Manuale del Falsario, an amusing memoir written in Italian shortly before his death.  The book, later translated into English, spelled out for readers, in minute detail, the ways in which he had created works of art forensically indistinguishable from the masterworks of previous centuries.

In describing the motivation for writing the book Hebborn wrote:

"I wrote this practical manual to satisfy many people eager to learn an art that, apparently, arouses considerable interest: that of forging paintings and drawings. Not a week goes by without a letter or a phone call from someone asking advice on how to create "new ancient works" and it is natural that I cannot answer them all personally. If these pages satisfy the requests of those enthusiasts, I can say that I have achieved my goal".

Posthumously Hebborn is seen by art crime experts as an artist who failed to gain their own notoriety and who faked art works to ridicule the art world's self-inflated connoisseurship. When first unmasked in 1978 Hebborn was sarcastically quoted as saying “how expert can these experts be if they can’t tell one of my drawings.” And throughout his brief lifetime he seemed to draw unadulterated pleasure at exposing art experts as wishful dunces.

ARCA Founder Noah Charney, in his book The Art of Forgery: The Minds, Motives and Methods of the Master Forgers elaborates that Hebborn delved increasingly into forgery, possibly in revenge specifically against the storied Colnaghi Gallery, believing that the firm had intentionally cheated him by buying his artworks on the cheap only to turn around and sell them for substantially higher figures.  Failing to gain recognition as an artist in his own right, despite winning prizes as a student at the Royal Academy Schools, Hebborn went on to successfully falsify works of art for decades.  By the time his handiwork was finally noticed, he had reportedly created upwards of 1000 artworks in a range of styles and periods from Giovanni Castiglione to David Hockney and sold his fabrications on through world-ranking galleries throughout the 1960s and 1970s.

Hebborn lived in Italy for more than 30 years, first in the bucolic medieval hilltop village of Anticoli Corrado, to the east of Rome, and toward the end of his life in a loft apartment in Trastevere.  His love life was stormy and his latent alcoholism well known among those who loved and or befriended him.

Prior to his death, acquaintances acknowledged that his excessive drinking had already lead to at least one blackout, where he is known to have fallen, striking his head hard on an iron table.  With all the tell-tale signs of a high-bottom drunk, Hebborn paid little heed to well-meaning doctors and friends who were worried about his health and his burgeoning alcoholism and who acknowledged with increasing concern, the red patches blotching his face, his poor hygiene and his unkempt beard and attire.

On the night of January 9, 1996 Hebborn reportedly visited a local enoteca near his home, one that he frequented regularly.  The painter sat for a while and is said to have drunk a few glasses of red wine as was often his practice as a regular patron at the establishment.  As he departed, reportedly between 8:30 and 9 pm, he told the proprietor "I'm going to dinner" before walking out into the cool winter's night.   Some say he was with someone that evening though no one has ever come forward to admit who this individual might have been or if this recollection was accurate or not.

On that January night, the evening was enveloped with rain and in the semi-darkness and downpour, law enforcement hypothesize that the forger may have stumbled on the street or perhaps passed out, overcome by alcohol he had consumed.  Hebborn struck his head hard on the pavement not far from the bronze statue dedicated to the Roman poet Trilussa, which gives his name to the small piazza near where Hebborn was found, along the Tiber river.

The forger was discovered lying in the rain just after midnight the following morning.  Scruffily dressed in clothing soaked with rainwater and smelling of alcohol and old sweat, he did not appear to have been assaulted in an attempted robbery as his wallet and credit cards were found on his person.  Suspecting him to be a simple drunken street tramp, he was hoisted up with only a cursory look and transported eventually to San Giacomo Hospital to sober up.

There Hebborn died from internal bleeding without waking up and without a medical examination or treatment as medical staff appeared to have overlooked his fractured skull as his hair was wet from the puddles of rain he was found laying in.

Twenty plus years after his post-mortem examination, the forger's life, and the events surrounding his squalid death, which likely occurred simply due to the general indifference of a hospital in Rome, still creates serve as the cinematic backdrop to a sad, but infinitely intriguing, story.