Highlights from "The Art of Saving Art: Fragments of Italian History"

In celebration of the 50th anniversary of the establishment of the Carabinieri Command for Cultural Heritage on May 3, 1969, the Palazzo del Quirinale will play host to a unique exhibition, "The Art of Saving Art: Fragments of Italian History" from today through July 14, 2019.

This exhibition serves to highlight the work of the Carabinieri Corps in protecting and restituting works of art, as well as to emphasize the foresight of Italian authorities in their establishment of the world's first cultural heritage crime-fighting unit, one year prior to the establishment of the famous 1970 UNESCO Convention on the Means of Prohibiting and Preventing the Illicit Import, Export and Transport of Ownership of Cultural Property. 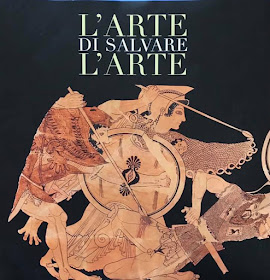 As the most active cultural heritage law enforcement division in the world, the Carabinieri TPC unit has grown from an initial team of 16 officers to approximately 270 officers today, working in fifteen field offices located in Ancona, Bari, Bologna, Cagliari, Cosenza, Florence, Genoa, Monza, Naples, Palermo, Perugia, Rome, Turin, Udine, Venice, plus a subsection in Siracusa.  Divided into three working units the “Archaeological Section”, the “Antiquities Section”, and the “Contemporary Art and Anti-Counterfeiting Section” each of the triad are tasked with preventing criminal actions involving works of art.

The exhibit, curated by Francesco Buranelli, is open every Tuesday, Wednesday, Friday, Saturday and Sunday from 10:00 until 16:00.  On display are some of the most important and story-worthy recoveries made by the squad during the last half-century including: 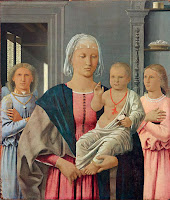 The Madonna of Senigallia, a painting by the Italian Renaissance master Piero della Francesca which was stolen in February 1975 from the Ducal Palace in Urbino when thieves scaled the Palazzo's walls with the help of scaffolding and broke in through a window.   This artwork was later recovered after a year-long multi-country investigation which eventually lead the Carabinieri officers from Urbino to Rome and lastly to a hotel in Locarno, Switzerland.  As a result of their investigation, four individuals from Italy, Germany, and Switzerland were arrested and ultimately charged. 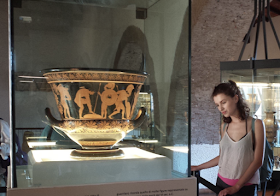 The Euphronios krater - This attic pottery masterpiece was trafficked out of Cerveteri and sold by Giacomo Medici and Robert Hecht Jr. to the Metropolitan Museum of Art in New York for one million dollars in 1972.  Once defined by Thomas Hoving as “one of the ten greatest creations of the Western civilizations.” This  Greek vessel, which dates back to 515 B.C.E, was repatriated to Italy following a landmark agreement in February 2006 between the Italian Ministry for Cultural Heritage and Activities and the Metropolitan Museum of Art.  Two years after the agreement was penned, the krater finally came home to Italy on January 15, 2008. 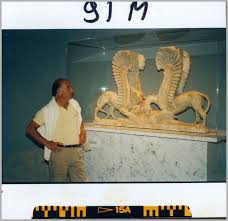 A Fourth-century BC sculptural group of two griffins attacking a fallen doe Pictured at left in a seized Polaroid photograph recovered by law enforcement authorities in a Geneva raid, this photograph depicts the now-disgraced antiquities dealer Giacomo Medici standing alongside this important antiquity.   Plundered from a tomb near Ascoli Satriano, in Foggia, and photographed, freshly plundered, in the boot of a tombarolo's car, the sculpture was purchased by Giacomo Medici.  He in turn sold the griffins on to fellow antiquities dealers known to launder illicit art Robin Symes and Christos Michaelides.  Symes and Michaelides then sold the artwork on to one of their many US clients, Maurice Tempelsman, who eventually negotiated a sale with the John P. Getty Museum. 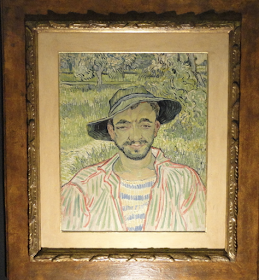 Le Jardinier by Vincent Van Gogh, stolen on May 19, 1998, from Rome's prestigious Galleria Nazionale d'Arte Moderna during an armed robbery just after the 10 pm closing time. This painting was recovered several months later, on July 5, 1998 at an apartment in the periphery of Rome.   Eight individuals were eventually charged and sentenced for their involvement in the museum's theft.

The Capitoline Triad, pictured at the top of this article, is a group of three deities who were worshipped in ancient Roman religion.  This famous triad was found by a well-known tombarolo from Anguillara Sabazia named Pietro Casasanta who heavily worked, along with a squad of paid subordinates, (paying off locals to keep quiet) in the area of L'Inviolata from 1970 onward.

Through informants, who were involved in the clandestine excavation, it was later determined that the Capitoline Triad was excavated in 1992 by Casasanta and two other accomplices, Moreno De Angelis and Carlo Alberto Chiozzi.  The trio had been digging in a pit near L'Inviolata alongside an ancient Roman wall belonging to either a temple or a patrician villa.  Casasanta then tried to shop the object to Edoardo Almagià, who passed on its purchase.

Casasanta then brokered a deal via the now deceased Lugano dealer Mario Bruno who was to then act as the intermediary dealer to a then-unnamed buyer who would eventually sell the object onward.  The piece was subsequently shipped to Switzerland in an anonymous van transported by two smugglers on Casasanta's payroll, Ermenegildo Foroni and Sergio Rossi.  Prior to that it had been hidden away in a warehouse for a furniture moving company called "Speedy International Transport".

Moreno De Angelis, unhappy with his cut, went to the Carabinieri of Castel di Guido and told the Station Commander about the find which is where Carabinieri Officer Roberto Lai's investigation got its starting point. De Angelis was later stopped near L'Inviolata with fragments in his car, that were matched with the triad. The carabinieri kept these details hidden during their investigation as they were concerned that the intermediaries might try and file down the sections of the triad if they knew there were known matching pieces of the triad which could tie them into the criminal conspiracy.

This video records a series of self-serving interviews given by Casasanta where he actually points out the location of the find spot.


This exhibition includes many other works of art not highlighted in this blog post for the sake of brevity, each with their own fabulous story to tell.  They include works of art stolen from churches, museums, archaeological areas, libraries, and archives.  So if you are in Rome this summer be sure to take some time to stop in.