Alexandra is a paintings conservator and a George Alexander Foundation Fellow which supports a range of fellowship opportunities for secondary, vocational students and post-graduates through leading national organisations. Her blog, ‘The Art of Value’, seeks to track her personal trajectory through the arena of art crime and cultural heritage protection. 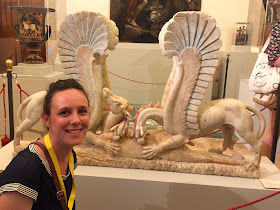 The Road to Salvation

The XVI canto of Homer’s Iliad describes a touching episode of the Trojan War: the death of Sarpedon, son of Zeus and the king of the Lycians. This epic scene majestically drapes the surface of the infamous Euphronios krater, stolen in the ‘70s from one of Cerveteri’s necropolis’ and reappearing years later on the squeaky-clean shelf of a New York museum. Here marks the moment when the vase first set foot on the road to salvation.

The story began with the illegal excavation of an Etruscan tomb in the area of ​​Greppe Sant'Angelo in the municipality of Cerveteri. When the tombaroli (tomb robbers) pulled the vase out of the ground they must have known they’d struck gold. The krater, large enough to hold seven galleons of liquid, was “thrown” by the potter Euxitheos and then decorated exquisitely by the painter Euphronios. Let me digress: Euphronios is one of two or three of the greatest masters in Greek vase painting. ‘His works are so rare that the last important piece before this one had been unearthed as long ago as 1840’[1]. Todeschini and Watson quote art historian Hovers in the following grandiloquent statement, ‘To call [the vase] an artifact is like referring to the Sistine Ceiling as a painting.’

Having done the deed the tombaroli then got in touch with an important American merchant, the result of their exchange being 125 million lire – no questions asked [2]. The monstrous trail of fictitious provenance documentation grew tenfold as the Euphronios krater journeyed from Cerveteri to America via an extensive array of dealers and restorers to mega-rich middlemen and some say red-handed museum officials. Here it underwent a number of unsuccessful sales before a scholar, who proposed himself as an intermediary for selling to the New York museum, generously took care of “the problem”. The vase sold for an extravagant US$1 million, the first time such a price was paid for an antiquity.[3] It was only when one of the tombaroli caught wind of the sale, realised he’d been slighted, and turned whistleblower by alerting the appropriate authorities that the subsequent Carabinieri investigation gained momentum.

If anyone is interested in this story and has not yet read The Medici Conspiracy: The Illicit Journey of Looted Antiquities From Italy’s Tomb Raiders to the World’s Greatest Museums, I suggest you get online and purchase a copy now. Peter Watson and Cecilia Todeschini have compiled a narrative that analyses the art market and its main players in all their multi-faceted, devastating glory. Each chapter reads like a journalistic article, thoroughly well researched and compelling, and together they interlock to present a tightly composed chain of events that unravel the workings of a well-oiled art crime machine. It is deliciously composed – I’d highly recommend it to anyone interested in the underground antiquities market.

At this point you may be wondering how the “underground antiquities market” functions within Australia, or indeed how Australian legislation handles offences relating to art crime when compared to the Italians and their Carabinieri. Art crime covers ‘forgery and fraud, theft and extortion, money laundering, and document and identity fraud’ and yet Australia has no specialist art and cultural property investigation unit that deals with this rather expansive and complex “grey-area” in law [4]. Imagine coming across an otherwise reputable art dealer who is in the process of selling an ancient rock art tool that you know has come out of the Kimberley’s illegally. You can’t get in touch with an Australian “art fraud squad” because there isn’t one. So whom do you turn to?

To handle cases of art looting, loss and theft, Australians have to operate through one of nine different authorities, for example the Federal and State Police Services, the Interpol National Bureau, Austac & etc. These authorities are responsible for the investigation of crime, in its entirety, and thus operate with a combination of statute and common law. Traditional modes for investigation, such as interviewing the witnesses or obtaining statements, become ‘ineffective’ in cases of art crime because the investigatory trail ‘tends to lack documentary evidence, which conventional fraud inquiries rely upon’[5]. Hopefully I haven’t bored you with the details, but I believe it’s important that you know where we stand.

Let’s conclude today’s post with a round-trip back to the Euphronios krater. On Wednesday the 5th of June, we took a class excursion into Rome for the L’Arte Di Salvare L’Arte exhibition at the Quirinal Palace. We were told the krater was on display here, amongst a number of other salvaged Italian heirlooms. Not quite comprehending the wonders promised, I felt my jaw drop rather comically upon entering the first room. We’d just walked into a trove of repatriated treasures. Stumbling past the only complete Capitoline Triad, stolen from the Tenuta dell’Inviolata in 1992; and the Il giardiniere by Vincent Van Gogh, stolen in 1998 from the Galleria Nazionale d’Arte Moderna in Rome; I came face to face with the pair of fourth century marble griffins, stolen from the tomb of Ascoli Satriano in 1976. The last time I saw this artefact was in a Polaroid photograph taken by the tombaroli, a shot that evidently showed the griffins stuffed haphazardly into the boot of a car – still encrusted with the residue of their recent earthy bed.

And, wide-eyed, we rounded the corner and arrived at the Euphronios krater standing stoically to the left in a room full of salvaged Etruscan relics.

The moment has been rather difficult to translate into words, so instead I’ll post a couple of pictures that best represent my impression of the matter. The image to the left depicts the “big fish”; the man who orchestrated the whole dirty, shameful transaction – from tombaroli to middlemen to the museum in New York – whilst plying his trade comfortably in Corridor 17 at the Geneva Freeport. Here he stands triumphantly in front of an airtight American enclosure that houses the Euphronios krater in a land far, far away from the tomb it was looted from. The second has me standing with an even bigger grin on my face, a grin that comes from knowing full well that whatever this “big fish” instigated back in the 70s the krater eventually made its way back home, leaving behind a shattered reputation and an open, gaping hole in the criminal art market.

To read more of Alex's musings on the art world, please visit her blog, The Art of Value.
To learn more about ARCA's postgraduate program in art crime and cultural heritage protection click here.