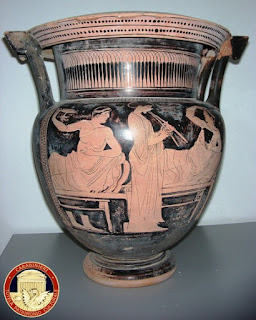 When, Where, From Who and At What Price...

Demonstrating, once again, how important observation skills (and patience) are in following up on illicitly trafficked material, an observant officer within the Palermo unit of Italy's Comando Carabinieri per la Tutela del Patrimonio has been able to identify a remarkable Attic Red-Figure Column Krater dating back to the 5th century BCE trafficked clandestinely. Ironically though, the officer's success did not come about by the monitoring of online sellers of objects, as misrepresented in numerous Italian language articles today, but rather by qualitative observation and awareness of the similarities in purchasing patterns buyers of such objects sometimes exhibit.

The large ceramic vessel, used for mixing water and wine, depicts a female playing a double aulos (diaulos), an an ancient Greek wind instrument.  She is standing between two male figures, each wrapped in a himation around the lower portion of their bodies while reclining languidly upon klines.  On the reverse side of the vase, the iconography depicts three additional standing youths, each of whom is mantled in a red himation, one of whom is leaning heavily on his walking stick. 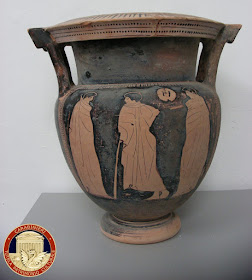 After the officer notated the suspicious vase, the antiquity was geolocated to a prestigious villa in Aci Castello, twenty minutes by car from Catania.  On requesting a search warrant, later approved by the Public Prosecutor's office, the object was seized and an individual unnamed by the prosecutor's office has been placed under investigation for having received stolen goods. 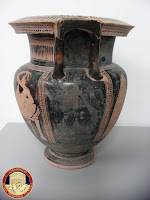 This interesting, yet time consuming, econometric approach to investigations demonstrates, once again, how the internet constitutes not only the conduit for selling illicit material, but also at times can be a useful environment for the recovery of illicit antiquities.

Using emergent web intelligence, i.e., determining buyer behavioral commonalities, the Carabinieri has found an unusual information gathering opportunity which facilitated the object's identification after the object had been sold.  This in turn will hopefully lead to officer's identifying those who deal in and sell illegally excavated objects on to others.