Museum Theft: Literally taking the piss, a $4.9m golden lavatory has been stolen from Blenheim Palace

Stolen during a burglary just days after it was plumbed into Blenheim Palace, the monumental country house in Woodstock, Oxfordshire where former prime minister Winston Churchill was born, artist Maurizio Cattelan's
18-karat gold, fully functional toilet has been yanked out of its posh installation setting on Saturday, September 14th.

Titled "America" the solid golden toilet some have deemed a smug symbol of excess, was created for the Guggenheim Museum in New York City where it debuted in 2016 as part of a "interactive" exhibition usable by the museum's patron's as a modest, single-occupancy museum restroom.  Similarly installed this week in Blenheim Palace's wood-panelled surroundings, the artwork is part of Cattelan's first significant solo exhibition in the UK in 20 years, which was set to run from 12 September - 27 October 2019.

In keeping with the interactive hilarity of Cattelan's installation, the golden throne was reservable in three minute time slots via bookings with the visitor's center in the Great Hall of the 18th Century stately home.  Collection patrons at Blenheim Palace were also encouraged to tag themselves in photos using the hashtags #AmericaBlenheimPalace or #CattelanatBlenheimPalace, though thankfully Brit's seem to have more decorum than to snap self-indulgent selfies on a golden loo. 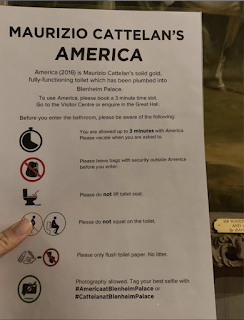 When a giant gold coin, weighing 100 kilos was stolen from the Münzkabinett (coin cabinet) at the Bode Museum in Berlin in the early morning hours of March 27, 2017 insider involvement was believed to play a part and subsequently thereafter an employee, who held a subcontracting job at the museum was named a suspect.

Authorities believe thieves in possibly two vehicles left the palace after removing the toilet sometime around 4:50 a.m on Saturday, September 15th. A 66-year-old man has been taken into custody in possible connection with the theft but has yet to be named and until now the toilet has not been recovered.

Person's with any information regarding this incident, should contact the Thames Valley Police on 101, quoting URN 273 (14/9), or report their information via their law enforcement website: https://www.thamesvalley.police.uk