Sometimes art is stolen with little public fanfare with the loss to owners never making newspaper headlines in quite the same way museum thefts do. This was the case almost thirty years ago when a thief or a group of thieves broke into the home of Judy Karinen in Hollywood Hills in 1991.  During that burglary, the culprit made off with a portrait of William Chester of East Haddon, painted around 1664, which Karinen had purchased for $4,000 in 1985. 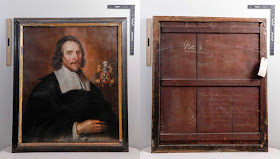 The painting was recovered this past summer, one of 50 stolen paintings Los Angeles police identified via a lead related to an auction earlier this year.  Searching through years of old police records, this single lost portrait was eventually identified by Los Angeles Police Detective Mel Vergara, who then contacted the painting's owner who was happy to have good news from the police department.

As a reminder to all art owners, LAPD officials commented that without the owner's original photo of the portrait of William Chester of East Haddon, which had been attached to the old police report, the stolen painting might never have been identified by officers doing a thorough records search.  Photographing and documenting your collection is key for detective work, as well as for most insurance policies.  Photographic records are also mandatory for listing missing items within the FBI's National Stolen Art File (NSAF) and in some other art loss databases such as the ones managed by Art Loss Register and Artive.

For now, the LAPD's search for artwork owners continues and the squad is asking for help identifying the owners of the portrait of a woman pictured above.

In 1991, a painting was stolen during a burglary in the Hollywood Hills. We recovered the painting last month. Upon locating the victim, she was ecstatic! She said she missed her “Englishman” We can’t wait to reunite them! Can you help us find the Duchess home? #stolenart pic.twitter.com/ieHxoHegN6
— Lillian L. Carranza🇺🇸 (@LAPDCARRANZA) August 23, 2019