Arrested and released for health reasons, German Dealer Michael Schultz is accused of having deceived clients with false documentation. 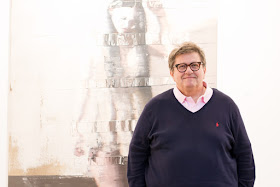 For more than 30 years, Michael Schultz operated one of Berlin's most prestigious galleries, focusing on contemporary European and Asian art and selling paintings and sculpture to Germany's rich and famous.  He also was associated with two other galleries, one in Beijing and another in Seoul and is known to have regularly participates at international art fairs in Cologne, Paris, Berlin, Madrid, Miami Beach, and New York,

But his future in the art market was thrown into jeopardy following his arrest by Germany's State Criminal Police Office or Landeskriminalamt (LKA) on October 17, 2019.  Standing accused of fraud, Shultz who was arrested at home, was released pending trial by the German magistrate due to his poor state of health.

At the heart of the investigation is a forged work of art purportedly by the renowned German visual artist Gerhard Richter.

The forged artwork, put up for auction at Christie's in New York, was given to a collector by Shultz as a repayment for an outstanding debt, when Shultz could not repay the original loan. The collector in turn consigned the painting for auction to Christies.

As part of the auction house's due diligence, they in turn contacted the Gerhard Richter Archive of the Staatliche Kunstsammlungen Dresden for information about the painting and from there things ultimately began to unravel.   The original artwork by Gerhard Richter, Catalogue Raisonné: 706-2, failed to match the artwork the collector had readied for auction.

What prompted Shultz to pawn a forged work of art so easily verified through a digital online catalogue Raisonné is curious. Richter has long been known as the "Man Behind the Squeegee" and his highly crafted abstract minimalist artworks bring top dollar on the contemporary art market as they are highly sought after.

To create his original works Richter first applies paint in scrims, then uses a length of perspex encased in wood, which he then moves left to right, or top to bottom to create textured smears of the many layers of the still-wet thickened paint.  A faux Richter, could never (conceivably) smear in quite the same way as an original. The forger would not only need to know exactly where and in what quantity the artist had placed the starting paint layers on the artwork but he/she would also have to employ the exact same squeegee sluices, using precisely the same motion and pressure to come anywhere close to replicating the work.

What drove Shultz to perpetuate this fraud is unknown.  Perhaps it was driven by long-standing debts, as the dealer is known to have closed his gallery on Mommsenstraße, opened in 1986 in the rich district of Charlottenburg, center of the former west Berlin.  He also opened preliminary insolvency proceedings in September through the District Court of Charlottenburg.

Interestingly, his bad luck with Gerhard Richter didn't just start now.  In 2015 Shultz had to answer to embezzlement charges Tiergarten district court when he sold a Richter he held as collateral for another art dealer who conversely, in this instance, borrowed money from him.  When that borrower defaulted, Shultz sold the other dealer's Richter for €300,000.  Given that the sold painting was actually the property of the second dealer's wife, (and therefore not the dealer's to use as a guarantee for debt, Schultz then claimed the painting had disappeared from his gallery. When the artwork was ultimately recovered, Richter was fined €15,000.