The Libya MOU in action. The United States recovers and restitutes an ancient sculpture stolen from the city of Shahat (Cyrene). 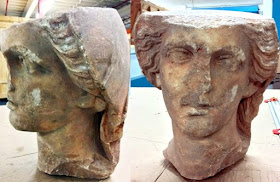 For years the Security Directorate of Shahhat in the eastern coastal region of Libya has tried to foil the attempts of individuals threatening to tamper with, loot, or destroy antiquities from the ruins of its ancient Greek and Roman city, Cyrene.  But given rampant urban encroachment and the lack of uniform security in a complicated political terrain created following the overthrow of Muammar Gaddafi in 2011, Cyrenaica's rich archaeological heritage remains vastly underprotected and often overlooked by the media amid its focus on looting and iconoclasm in Syria and Iraq.

In answer to concerns that looters are exploiting the political chaos in the region, UNESCO placed all five of its Libyan World Heritage sites on the UNESCO World Heritage in Danger list in July 2016.  This list named the  2,600-year-old Greco-Roman archaeological city of Cyrene, which struggles with neglect, vandalism, looting and unregulated development; the ancient city of Leptis Magna; the ancient city of Sabratha; the Islamic desert trading city of Ghadamès; and the Tadrart Akakus, a mountain range in the desert of the Ghat District in western Libya that contains thousands of prehistoric rock-art sites, some dating as far back as 9,000 BCE.

Yet despite the lack of press coverage, a steady trickle of artefacts of dubious origin originating from Libyan historical sites do get identified by illicit trafficking researchers, law enforcement and customs officials.  Usually this occurs years after their original looting, once the antiquities are routed out of the region via transit countries and sometimes once they make their way into the commercial art market, turning up for sale in galleries and showrooms in London, Paris, Switzerland, Barcelona and the US.

Some notable Libya-origin objects identified include:


A four foot marble statue, identified in 2013, as having been exported by Dubai-based antiques dealer Hassan Fazeli, dating from the 3-4 century BCE.  The statue was imported with provenance stating it was from the "personal collection of Mr Fazeli since 1977" and as having originated from Turkey when in fact it had actually been stolen from Cyrene before being smuggled into Britain.  This HMRC court case was not the first time that Hassan Fazeli's name had appeared connected to trafficked antiquities.


Three Hellenistic Period funerary divinities probably coming from the same burial either from Cyrene or Apollonia seized in Geneva.


A set of five marble sculptures from Cyrenaica seized by Egyptian port police in Damietta when inspecting  a container bound for Bangkok.


Despite these identifications, protecting Libya's cultural heritage sites is difficult, in part because there is no single unifying political authority for the country as a whole in the aftermath of the Libyan Civil War.

The third governmental authority in Libya is based in Tobruk and al-Bayda.  The House of Representatives (HoR) in Tobruk is considered to be the legitimate legislative authority under the Libyan Political Agreement, while the government of Abdullah al-Thinni operates from al-Bayda. Both the Tobruk and al-Bayda authorities are united under the control of Field Marshal Khalifa Belqasim Haftar who leads the Libyan National Army (LNA) and the system of government in much of the east and some of the south and west parts of Libya following what is referred to as the Second Libyan Civil War (2014 to present)..

In response to a long history of threats to archaeological and historical sites in Libya, and to solidify U.S. and Libya’s joint collaboration to combat looting and trafficking of cultural objects originating from the north african country, the US signed its 17th cultural property agreement with Libya in 2018.  Signed by Irwin Stephen Goldstein for the United States and by Lutfi Almughrabi, Libyan Under Secretary for Political Affairs, the agreement formalizes a collaboration to protect Libya heritage for a period of five (5) years, unless the MOU is extended at a later date.  This agreement has been opposed by many in the antiquities trade but seen as necessary by those who see civil unrest and war as a precursor and or conduit to the trafficking of illicit antiquities.

Article 1.2 of the MOU states:


In the first tangible fruit of this accord, Jamal Ali al-Barq, head of the Department of International Cooperation, at Libya's Foreign Ministry has announced that during a ceremony today, at the Libyan embassy in Washington DC, the United States Department of Homeland Security, Immigration and Customs Enforcement (ICE) and the Department of Justice (DOJ) will hand over a marble head of a woman to the Libyan authorities.

The identification of this antiquity, up for auction in the United States, was partly made possible by French historian Morgan Belzic, an expert on the sculptural remains of Libya who cooperates with law enforcement authorities on identifying plundered objects from Shahat (Cyrene), Susa (Apollonia), Tocra (Taucheira), Tulmaytha (Ptolemais), and Benghazi (Euesperides/Berenike).  While working on his PhD, Belzic noted a correlation between the increasing destruction of funerary monuments in Libya and the appearance of ancient pieces on the market statistically out of range with those appearing prior to the country's unrest.

This fragmented head of a veiled woman is the the first identification from Belzic's research into illicit trafficking to be returned from the United States.  In a conversation with Belzic, he in turn credited US art historian and archaeologist Susan Kane, of Oberlin College, Ohio, and the Department of Antiquities (DoA) of Libya for their own critical roles in making this recovery possible.

According to an HSI Cultural property report, the object had made its way into the United States via a Dubai-based antiquities dealer to a collector in Queens, NY following an investigation which began in 2008 identifying objects from various nations sold to major museums, galleries and art houses in New York City.  As a result of this investigation several key players in a transnational criminal organization engaging in the illicit trafficking of cultural antiquities were identified.

Anyone with information about the illicit distribution of cultural property within and the illegal trafficking of artwork within the United States are urged to call ICE at 1-866-DHS-2-ICE or to complete the online tip form.