Responsible for some of the material since the 1920s, the Manchester Museum, part of The University of Manchester, and the Australian Institute of Aboriginal and Torres Strait Islander Studies (AIATSIS) have announced the plans of formal restitution for 43 secret sacred and ceremonial objects to the Aranda people of Central Australia, Gangalidda Garawa peoples’ of people of the Gulf of Carpentaria, Nyamal people of the Pilbara, and the Yawuru people of Broome. Two formal handover ceremonies will take place handing over the objects at Manchester Museum in late November.

The returns this Autumn mark the first repatriation from the United Kingdom for the Return of Cultural Heritage project being led by AIATSIS, which explores and facilitates the return of Aboriginal and Torres Strait Islander cultural heritage materials (objects, audio visual, and images) from overseas and follows a recent announcement of the restitution of 42 objects from the Illinois State Museum in the United States after 10 months of discussions.

Often labeled as returns based on the current ‘political correctness’ these restitutions show that museum management in key institutions are beginning to challenge the assumption that the indigenous voice is unimportant and have understood that addressing these concerns, within the museum context and is not merely a selling out on a western rationalist tradition originating in the "European Enlightenment" but instead a very public acknowledgement of the moral case for return by addressing a sense of dispossession by redefining rights of possession. 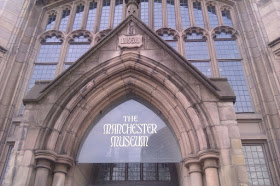 While the Manchester Museum's reparative justice should be seen as a small victory, one might also ask why it’s taken so long and why so many other museums see it as appropriate to hold such ethnographic items in their collections.

Well Done Manchester for taking these long and arduous steps. This is how you lead the change.