Book Review – Females in the Frame, Women, Art and Crime 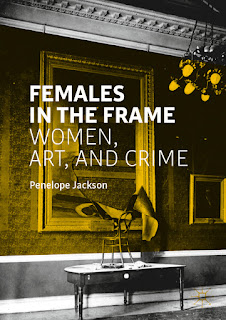 Penelope Jackson wrote this book as a result of a challenge unwittingly thrown down by Dr Noah Chaney. He somewhat naively noted in his 2015 book The Art of Forgery: The Minds, Motives and Methods of Master Forgers “there is a decided lack of female forgers in this book; there are female accomplices and con men, but I know of no notable forgers in the history of forgery”.  This motivated Jackson to investigate further the role women play (have played) in art crime.  The result of her research is this easy to read book.

Penelope Jackson is an Art Historian and is the author of: Thieves, Fakers and Fraudsters: The New Zealand Story (2016).  The offenders in this book are all men apart from one female thief who somewhat brazenly stole a piece of art from an exhibition in a small Otago town.  Jackson noted that the only other women in the book were at the receiving end of art crime. In Females in the Frame she wanted to uncover not only other roles women took in art crime but also try and understand their reasons for doing it.  For me, the why is often more interesting than the how.

One of the first things that you will notice (well I did anyway) is the depth of the research that Jackson has done for this book. In some instances, she has given institutions information about their artwork that they were unaware of.  In her way Jackson has added to the history of these artworks.

Jackson has given each chapter a theme which provides a useful cohesion to the book. These chapters are essentially case studies on the women involved.  I believe this makes the book more relatable as it brings the characters to life.  The chapters give examples of women who have destroyed art  (chapter 2 – Lady Destroyers), mothers who have protected their art criminal sons (chapter 3 – The Mother of All Art Crimes), women who have vandalised art (chapter 4 – She Vandals), women who conned artists and clients (chapter 5 - The Art of the Con(Wo)man), women who stole art works (chapter 6 - The Light Fingered),  forged art (chapter 7 - Naming Rights), those who used their professional positions to commit white collar crime (chapter 8 – The professionals) and her concluding chapter (chapter 9 – Afterword: Making a Noise about the Silence).

Jackson goes into detail in her chapters about the women who did what they did and why.  She has sympathy for some of the actions such as the Suffragettes who destroyed paintings rather than hurt people to highlight the inequity of women in society. Although the cause for women’s right to vote is a just one there is an overarching sadness in terms of artwork that has been lost due to vandalism, destruction or theft. Another example is of the Russian woman who stole from her work to pay for diabetes medication. Something I can’t imagine ever having to do living in my comfortable world but once again, I get a feeling of sadness and disappointment by Jackson who is fiercely protective of art works.

She does save some particular ire for Clementine Churchill.  Jackson spends a considerable amount of time discussing Clementine Churchill’s alleged penchant for destroying unflattering portraits (according to her) of her husband.  One such painting was commissioned by the House of Commons and the House of Lords after the sum of 1000 guineas was raised.  This painting was to celebrate Churchill's 80th birthday.  The chosen artist was celebrated portraitist Graham Sutherland and the painting was unveiled at a televised event, meaning, thankfully, that there are photos of the painting. This painting was a gift from the nation but also to the nation of a highly regarded public figure. The story (in fact Jackson gives four possible accounts of its demise) is that Clementine did not like the portrait, that she believed it to be an unflattering likeness of Churchill and organised for it to be destroyed.  Arguably it showed him perfectly, quite possibly how everyone remembers him, stubborn, unbending and resolute, not to mention 80 years old.   Jackson rightly argues that this was never her painting to destroy.  This painting belonged to the people of Great Britain.  Likewise, Jackson asks the question about who truly has authority, ownership or the right to destroy any of these artworks.

This segues rather nicely into the case studies of women protecting their art criminal sons and the lengths they would take to protect them, including the heart-breaking destruction of many irreplaceable pieces. Jackson is forever trying to understand why the women did as they did and explores the psychology behind their actions as well.  I believe this adds another layer of richness to the book.

Jackson also discusses where artwork has been accidently damaged by cleaners or more intriguingly or perhaps tragically by amateur restorers.  She highlights the work by two well-meaning but ultimately hopeless (that word might be too strong) women who did irreparable damage to very old and sacred work.  They meant well but there is a reason why such work is left to the professionals. In my view, the results were criminal and perhaps did more damage than any criminal/vandal could have done.

Another very interesting story that Jackson writes about is the case of an Australian woman, an acclaimed artist, who decided one day to paint under a nom de brush.  That in itself was not an issue, but it was the fact that she took on the name and persona of an aboriginal man and began to paint in an obvious aboriginal style that is the problem.  Add to that her total lack of understanding why a white, middle class woman pretending to be an aboriginal man might be offensive.

Jackson’s book also sets the story straight on a few myths.  The belief that the novelist Patricia Cornwell destroyed a painting just to get DNA from the artist is debunked by setting out the facts of what happened. Likewise, in her final chapter she also sets the record straight on the film, The Monuments Men and separates the truth from the Hollywood version. This brings me to my favourite moment in the book, the story of Rose Valland (played by Cate Blanchett in the movie The Monuments Men).  As Jackson says the film should be called The Monuments Men and Women but Hollywood never let the truth get in the way of a good story.  It is this section in the book (in my view) that sums up so much of what Jackson is trying to highlight.

Rose Valland (inter-alia) was responsible for saving and recovering many works of art that the Nazis tried to pilfer during world war two.  She put her life on the line so that these works could be recovered.  Rather than focusing on this remarkable act of bravery and the fact that she was a well-qualified art historian there seems to be more attention placed on how she looked; “plain looking, and plainly dressed” or described as; “a mousy little spinster” (with nerves of tungsten).  Jackson talks more than once about gendered language in her book and comments on the way in which women are portrayed in the media versus men.

Jackson has written an accessible book that takes the reader on a journey into the world of art and crime and women.  She attempts to understand why the women did as they did as well as trying to redress the balance in how women are portrayed in print.  It is evident that Jackson has a real love of art and the overriding message for me was the need to protect and look after all art so that future generations can experience these marvellous works.
at Friday, November 08, 2019
Share