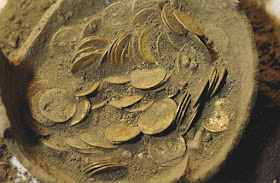 In one of two museum thefts this week in Italy, authorities have reported that fifty gold solidus, dating back to the 5th century CE have been stolen from the Museo di San Mamiliano in Sovana, Italy.

Discovered during restoration works carried out under the floors of the city church of San Mamiliano in 2004, the hoard of gold coins is known as the Treasure of Sovana.  Coins like these, were once in use by the Byzantine Empire between the fourth and tenth centuries.

In total, cultural authorities documented 498 coins in the cache which can be dated chronologically between the beginning of the 5th century with the reign of Honorius and the last decades of the century - the reign of Zeno. Each of the coins weighed in at approximately 1/72 of a Roman pound (approx. 4,5 grams), and is said to be nearly 24 karat gold (so in excess of 99% pure). 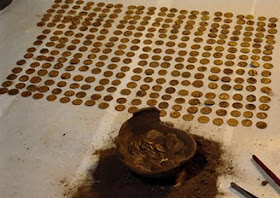 It has been reported that once the thief or thieves entered the museum, they were able to deactivate the alarm system connected to the local carabinieri station and then turn off the internal video surveillance system to impede their identification.  For good measure the thieves also stole a CCTV backup storage device, likely indicating they were familiar with the museum's security.

Once inside the museum, the culprits attempted to break the safety glass surrounding the coins, but meeting some resistance, and pressed for time, the thieves made off with only a portion of the gold coins on display.

The following is a list of the coins that make up the Treasure of Sovana divided by empire and by name of the emperor (or emperors) transcribed.  Note: Which coins are missing has not been released. 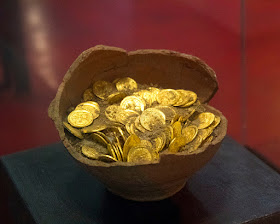 Today, the fifth-century solidus is highly sought after, as much for its gold purity, as for its historical interest. Purchased legally, they are usually more expensive than a denarius issued by the same emperor.
at Saturday, November 09, 2019
Share