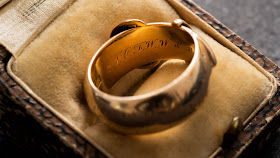 Note:  This article has been revised to include an interview with Arthur Brand at the closure of this article:

Engraved with Greek lettering, a gold ring donated by the Irish poet and playwright Oscar Fingal O'Flahertie Wills Wilde has been recovered. The author
of scintillating essays and The Picture of Dorian Gray donated the ring to his second alma mater, the University of Oxford, in 1876.  A place where, looking back on his life Wilde reflected pivotally in a letter to his lover Lord Alfred Douglas that "the two great turning points in my life were when my father sent me to Oxford and when Society sent me to prison." ('De Profundis' — O. W.).  It was the young lord's father who brought about Wilde's spectacular fall from grace.

Wilde read Classics as an undergraduate at Oxford from 1874 to 1878. His ring was once displayed in a butterfly case alongside the  "Magdalen" papyrus, three pieces of a manuscript donated by Reverend Charles B. Huleatt.  The ring disappeared from Magdalen College on May 2, 2002 in the early morning hours when Eamonn Andrews A.K.A. Anderson, a former Magdalen cleaner and handyman broke into the college, stole whiskey from the college bar and then impulsively made off with the 18-carat gold friendship ring and two rowing medals: the 1910 Henley Royal Regatta Grand Challenge Cup medal and a 1932 silver and bronze medal presented to RFG Sarell in 1932.

When forensic evidence quickly linked the thief to the crime, Andrews confessed, telling police during his interrogation that he had sold the ring and medals to a London scrap metal dealer for just £150.  Andrews was subsequently sentenced to two years incarceration for this offense, yet despite a modest reward, the 18-carat gold literary artifact seemed lost, and would remain missing for 17 years.

But Wilde's famous ring was too important and too valuable to be melted down, something the fence Andrews delivered the ring to evidently knew.  Collaborating with London based Hungarian-born antiquities dealer William Thomas Veres, a dealer with a less than pristine background written about often on this blog, Arthur Brand, a Dutch private investigator worked credible leads which led to the eventual recovery of the author's ring.

Brand's informant (or informants) led him to explore details of the famous April 2015 London heist at the Hatton Garden Safe Deposit Company.  That multi-million pound heist took place over the four-day Easter and Passover holidays and was carried out by a gang of mostly elderly robbers, in what some believe was to be their swan song burglary before retiring for good.

During this heist some of the culprits dressed as gas repair men as they drilled away for hours before eventually boring their way through a 50 centimeter wall to gain access the storage facility, while bypassing the main door.  Once through the wall, the team of burglars ransacked a total of 73 safety boxes containing gold jewellery, precious and semi precious stones, documents and cash.

John "Kenny" Collins pled guilty to conspiracy to commit burglary and initially sentenced to a seven-year prison term and pay a total of £27.5 million or face another seven years in jail.


Hugh Doyle was found guilty of concealing, converting or transferring criminal property and was sentenced to 21 months in prison, suspended for two years.


Daniel Jones pled guilty to conspiracy to commit burglary and initially sentenced to a seven-year prison term and pay a total of £27.5 million or face another seven years in jail.


Terry Perkins pled guilty to conspiracy to commit burglary and  initially sentenced to a seven-year prison term and to pay a total of £27.5 million or face another seven years in jail but died one week after the ruling.


Brian Reader was sentenced to a six years and three months prison term and to pay a total of £27.5 million or face another seven years in jail.


Michael Seed was found guilty of burglary and conspiracy to burgle and was sentenced to 10 years in prison.


Jon Harbinson was found not guilty and discharged.

Of the £14 million in loot taken during the Hatton Garden burglary only a fraction of the stolen property, approximately £4,3 million, was ever recovered. Yet whispers from not so literary criminal informants with knowledge of the London heist's haul spoke of one of the items grabbed in the burglary:

...a Victorian gold ring inscribed with what they thought was Russian text.

For now details about Brand's recovery are limited due to the nature of the investigation, though this is not the first time that the name of the London art merchant William Veres has been connected to the Dutch investigator's recoveries, as Mr. Brand openly admits when interviewed.

In November 2018 Veres was connected to Brand in the recovery of a 6th century byzantine mosaic of Saint Mark which once decorated the apse of the church of Panaya Kanakaria in Lythrangomi, Northern Cyprus. Veres' name also came up a second time in January 2019, connected to Brand's recovery of two 7th century limestone reliefs which originally adorned the church of Santa Maria de Lara.

When asked about the London dealer's motives for helping, Mr Brand stated first and foremost, that Mr. Veres is never paid for the assistance he gives on these cases.  Secondly he stated that though he [Veres] has had encounters with the law in the past, Brand believes that these assists might help the dealer in cleaning up his reputation.  Lastly, Brand stated that you cannot recover stolen art with the help of the Salvation Army, and underscored "all my investigations, including this one, are conducted with the local police authorities full knowledge and are completely legal in the eyes of the law."

When asked about George Crump, who Brand states facilitated in this investigation, the private investigator stated that Crump is "an honest man who knows the London criminal world thanks to his late uncle, a former owner of a casino."  Brant also indicated that Crump's uncle died decades ago but that the nephew still knows his late Uncle's old friends and was therefore "the best person to discreetly inquire as to where the ring might be located, and indeed he succeeded."

The story of this recovery has been filmed by a Dutch film crew and will be aired as part of a documentary in the Summer of 2020.  For now Oscar Wilde's ring is is set to go on display, Wednesday December 4th during a ceremony at the University of Oxford.
at Sunday, November 17, 2019
Share