A culture of impunity on the cultural causalities of war 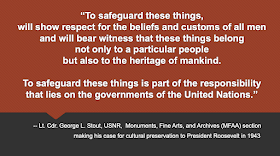 
Twice in the span of only 24 hours, the current president of the United States has implied that in the event of retaliation against the killing in Baghdad of General Qassem Soleimani, the cultural sites of Iran would be fair game as military targets.

"Iran has been nothing but problems for many years. Let this serve as a WARNING that if Iran strikes any Americans, or American assets, we have.....


....targeted 52 Iranian sites (representing the 52 American hostages taken by Iran many years ago), some at a very high level & important to Iran &  the Iranian culture, and those targets, and Iran itself, WILL BE HIT VERY FAST AND VERY HARD. The USA wants no more threats!"

....targeted 52 Iranian sites (representing the 52 American hostages taken by Iran many years ago), some at a very high level & important to Iran & the Iranian culture, and those targets, and Iran itself, WILL BE HIT VERY FAST AND VERY HARD. The USA wants no more threats!
— Donald J. Trump (@realDonaldTrump) January 4, 2020

The US leader's second statement, verbal, was made aboard Air Force One on Sunday, 5 January 2020.  Given the frequency with which President Trump has wielded his twitter account to bend constituent opinion to his will, attacking investigations such as the special counsel and impeachment probes, liberal news organizations, Democrats, and various country leaders around the globe, those reporting aboard the presidential airplane sought clarification on the American president's troubling tweet.

Responding to their query, the President Trump expanded on his earlier provocatory statement saying:


Both of these statements were made following Major General Hossein Dehghan's own escalative words after the U.S. ordered the killing of Soleimani. Interviewed by CNN journalists in Tehran, Dehghan, who serves as military adviser to Iran's Supreme Leader, Sayyid Ali Hosseini Khamenei stated that Iran would retaliate directly against US "military sites" as a reprisal for the death of the controversial Iranian general.

Is Art Worth a Life?

Authoritarian regimes have been known to use cultural heritage manipulatively, in accordance with their own needs, and often in complete disregard to prevailing international law.

While tensions between the US and Iran escalate, it is important to remember that with respect to the protection of cultural property during armed conflict the general provisions of customary international humanitarian law (IHL) Rule 38, protecting civilian property, apply.   This rule requires that each party to the conflict must respect cultural property and specifies that:

A. Special care must be taken in military operations to avoid damage to buildings dedicated to religion, art, science, education or charitable purposes and historic monuments unless they are military objectives.


B. Property of great importance to the cultural heritage of every people must not be the object of attack unless imperatively required by military necessity.

Likewise specific protections, recognizing the importance of a country's cultural heritage to humankind are enshrined in the 1954 Hague Convention for the Protection of Cultural Property in the Event of Armed Conflict.  Article 4, (Respect for cultural property) states:

1. The High Contracting Parties undertake to respect cultural property situated within their own territory as well as within the territory of other High Contracting Parties by refraining from any use of the property and its immediate surroundings or of the appliances in use for its protection for purposes which are likely to expose it to destruction or damage in the event of armed conflict; and by refraining from any act of hostility, directed against such property.


2. The obligations mentioned in paragraph 1 of the present Article may be waived only in cases where military necessity imperatively requires such a waiver.


4. They shall refrain from any act directed by way of reprisals against cultural property.

The Hague Convention is based on the principle that "damage to cultural property belonging to any people whatsoever means damage to the cultural heritage of all mankind, since each people makes its contribution to the culture of the world."

The Second Protocol, further elaborates the provisions of the Hague Convention relating to safeguarding of and respect for cultural property and the conduct of the military during hostilities.  Both the First and the Second Protocols lead to the question of applicability of customary international law, of other sources of international law and local law and what they require of the warring parties.

Under the Hague Convention, as an official state party to the Convention and the First and Second Protocols, the Iranian government is obliged ‘respect’ cultural property in their or other territories.   The United States of America deposited their instrument of ratification of this Convention on 13 March 2009.  Their own instrument contained the following additional declarations:

(1) It is the understanding of the United States of America that “special protection”, as defined in Chapter II of the Convention, codifies customary international law in that it, first, prohibits the use of any cultural property to shield any legitimate military targets from attack and, second, allows all property to be attacked using any lawful and proportionate means, if required by military necessity and notwithstanding possible collateral damage to such property.


(2) It is the understanding of the United States of America that any decision by any military commander, military personnel, or any other person responsible for planning, authorizing, or executing military action or other activities covered by this Convention shall only be judged on the basis of that person’s assessment of the information reasonably available to the person at the time the person planned, authorized, or executed the action under review, and shall not be judged on the basis of information that comes to light after the action under review was taken.


(3) It is the understanding of the United States of America that the rules established by the Convention apply only to conventional weapons, and are without prejudice to the rules of international law governing other types of weapons, including nuclear weapons.


(4) It is the understanding of the United States of America that, as is true for all civilian objects, the primary responsibility for the protection of cultural objects rests with the Party controlling that property, to ensure that it is properly identified and that it is not used for unlawful purposes.

The 1998 Rome Statute of the International Criminal Court, which established the International Criminal Court (ICC) at the Hague, and confronts the most serious crimes of concern to the international community as a whole (in art. 8(2)(b)(ix)) prohibits during international armed conflict intentionally directing attacks against buildings dedicated to religion, education, art, science or charitable purposes, historic monuments, hospitals and places where the sick and wounded are collected, provided they are not military objectives.  The International Criminal Court further underscored its stance on crimes against heritage as a potential war crime as recently as the August 2016 case against Mr Ahmad Al-Faqi Al Mahdi. During his trial, Prosecutor of the ICC, Fatou Bensouda, gave an opening statement recognizing that "deliberate attacks on cultural property have become actual weapons of war. They are being used to eliminate entire communities and wipe out any traces left of them, their history and identity, as though they never existed."

Unfortunately, due to its limited jurisdictional power and investigatory resources only the worst crimes against humanity van ever be prosecuted by the ICC and then only if the suspected individual is a citizen of a State Party to the ICC Statute.

Ratified by 122 countries, including all of South America, almost all of Europe, most of Oceania, and about half of Africa, the Rome Statute has only been signed (and not ratified) by the United States, who further informed the United Nations that they do not intend to become a state party. Opposed to the empowerment of an international court that could try U.S. military and political leaders under international law, the US maintains observer status as a non-ratifying country during the Assembly of States Parties.

Most recently, and in response to attacks on heritage by terrorist organizations, the United Nations Security Council unanimously adopted Resolution 2347 on 24 March 2017 in order to strengthen protections for heritage during armed conflicts where they are most vulnerable. This resolution, enacted by the 15-member council, of which the US is a permanent member, univocally condemns the unlawful destruction of cultural heritage in the context of armed conflicts, notably by terrorist groups, however not exclusively.  This UN resolution also affirms that attacks against cultural heritage might constitute a war crime and therefore perpetrators must be brought to justice. In drafting this resolution the UN Security Council stated that the protection of heritage is a key means for the maintenance of international peace and security and noted how intimately cultural heritage and identity are linked.

That being said, the exigencies of war will always be unkind to mankind's cultural heritage where the atrocities (and ultimate persecutions) of one actor are not always balanced with those of their heritage destruction counterparts, simply based upon the previous pen strokes of their government's legal representatives.

The Pentagon’s two pronged interest in culture: What distinguishes data gathering for heritage preservation from espionage?

Despite the Pentagon’s October 2019 announcement that it would be reviving a version of one of World War II’s most storied military units, the teams of art experts once referred to as the Monuments Men, not everyone in the US military seems to be on the same page with the US President when it comes to the preservation of cultural heritage in zones of conflict and unrest.

The revised US military team, to be made up of Army Reserve officers serving under the Civil Affairs branch, aims to serve as a scholarly liaison for military commanders and the local authorities, helping to secure the cultural heritage in conflict zones. These reservists are also tasked with informing the United States military and allied forces of sites to avoid in the event of pending airstrikes or on the ground engagements in the event of war and conflict.

One has to wonder what those tasked with developing "No Strike" lists are thinking regarding President Trump's statements of suggested intentional destruction of cultural property, as part of an overall US military strategy, should Iran's government move to escalate tensions in an eye for an eye counterattack.

Did the US president envisage how such portending threats might place this new team on shaky ethical terrain, given that they cannot control the use of the ethnographic intelligence they collect for the military, and thus, cannot ensure their work isn’t used to harm the very heritage they are tasked with trying to protect?  Likewise, gaining the trust of neighboring Middle East countries, in sharing their own georeferencing data coordinates on cultural heritage sites with the US military, on the pretext of protecting culture property, probably just got a whole lot harder.

In closing, while some may see this Op Ed as a partisan article, that is truly not this writer's intention. This is an article which underscores the laws and instruments in place which sometimes hold individuals accountable for their actions and other times seem to be just grand wishes or written gestures that don't really adequately address the definition of the vexing question of ‘military necessity’ as it relates to cultural property destruction in the laws of armed conflict.  That grey area, subject to individual interpretation(s), often fails to impede those determined to weaponize culture and cultural fissures on the pretext of vanquishing one's enemies.
at Monday, January 06, 2020
Share