Flash Back to Restitutions: Remembering the Apulian dinos, 340-320 B.C.E. attributed to the Darius painter 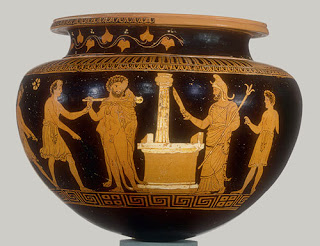 A long time ago, in a galaxy seemingly far far away, a red-figure 340-320 B.C.E. Apulian dinos, attributed to the Darius Painter, once lived in the Metropolitan Museum in New York.   The antiquity was purchased by the Met via the Classical Purchase Fund, the Rogers Fund and the Helen H Mertens and Norbert Schimmel gifts in November 1984.

This red-figure vase, sometimes called a lebed, was decorated with scenes from a comedy, perhaps by Epicarmos, involving one of the numerous adventures of Herakles in which he encountered Busiris, a king who had been advised to sacrifice all strangers to Zeus in order to avoid drought.

In the primary image on the vase and to the right of the altar and column stands Busiris, dressed in traditional oriental-style clothing. He is the one holding a scepter and who is brandishing a menacing knife. Heracles, pictured on the opposite side of the altar, casually draped in a lion's cape, is his intended victim.
Others in the scene include two Egyptians, busy assisting in the pending mayhem.  One carries a butcher's block with more knives while another is seen adding water to a kettle, placed to boil on the fire. There are also servants depicted carrying a tray of cakes, an amphora, and a wine jug. What better way to end a murder than with a quick snack washed down with wine.

Yet, in the end, Herakles ultimately prevailed over Busiris, much in the same way the Italian government did in February 2006 they reached an agreement with the Metropolitan Museum of Art in New York to return this and five other plundered antiquities identified in the museums collections.

Polaroids photographs of the dinos (inv. 1984.11.7 when at the Met) were seized by law enforcement during a raid at the Geneva Freeport.  These identified the antiquity in three different conditions, first in guilty fragments, then partially restored with the glued joints still visible, and lastly in a photo after it had been purchased and put on display at the Metropolitan Museum.

As Dr. David Gill pointed out, five objects, each attributed to the Darius painter were acquired by different museum institutions between 1984 and 1991, a period when southern Italy was subject to extreme plundering.  Some of those items, are still in museum collections outside of Italy.

In 2001 Ricardo Elia, who surveyed Apulian pottery, estimated that some 31 per cent of the total corpus of Apulian pots totalling more than 4200 vases, all surfaced on the ancient art market between 1980 and 1992 virtually all of which has little or no substantiated history.  A group of 21 of these are (still) on display at the Altes Museum (German for Old Museum) on Museum Island in Berlin, Germany, the major part of which come from a single burial are attributed to the workshop of the Darius painter, and were acquired in 1988.  Documented in the museum as coming from an ancient Swiss collection, photos from the seized Giacomo Medici archive show the fragments from these same vases, still dirty with earth, waiting to be put back together again.

If you want to see this ancient object in its natural habitat and see the video in this post as it works its magic in person, please stop by the fabulous Museo Archeologico Nazionale di Taranto - MArTA and take a look. 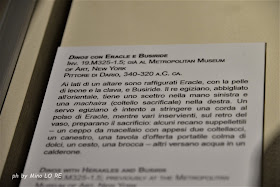 If you would like to read more about this grouping of stolen antiquities: please consult the following:

"Analysis of the looting, selling, and collecting of Apulian red-figure vases: a quantitative approach" Trade in illicit antiquities: the destruction of the world’s archaeological heritage, by Elia, R J 2001 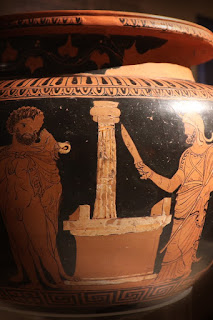 The Medici Conspiracy: The Illicit Journey of Looted Antiquities-- From Italy's Tomb Raiders to the World's Greatest Museum, by Peter Watson and Cecilia Todeschini

Art and Crime: Exploring the Dark Side of the Art World, edited by Noah Charney
at Saturday, February 29, 2020
Share