Another looted conflict antiquity from the Temple of Eshmun in Sidon, Lebanon seized. This time at Royal Athena Galleries in New York

When speaking of the effects of conflict antiquities, the market's most vocal proponents, the International Association of Dealers in Ancient Art (IADAA) and the Confédération Internationale des Négociants en Œuvres d’Art (CINOA) often reflect on the limited number of objects seen in market circulation derived from the recent Middle East conflicts.  Members in positions of power are invited to speak at UNESCO, stand at podiums at trade events, and write articles lamenting that collectors and the trade in an age-old tradition, are under attack by heavy-handed regulators.

They never seem to quite get around to discussing in detail any of the illicit artefacts that  HAVE made it into the ancient art market, sometimes not identified for decades, and long after their respective civil wars are resolved.  They also don't monetize their own profits from this slow trickle of conflict antiquities, which transfuse the ancient art market with financial blood, years after the human bodies that once fought around them stop bleeding.

The dealer associations don't like to talk about the painful scars of plunder from earlier wars, like the museum-quality Khmer-era statues that came to market following the civil disturbances in Cambodia.  Some of the finest examples of Cambodian art produced during the Angkorian period (circa 800-1400 CE) were extracted from that country and readily snapped up by art institutions and private collectors, despite the fact that they were pillaged and illegally exported.

Looted from Cambodia’s ancient temples, during the Cambodian civil war, which raged from 1970 to 1998, conflict antiquities from that non-middle east war did not begin to flow back to their country of origin until 2014.  Likewise, antiquities dealers known to be involved in the trade, like Nancy Wiener and Douglas Latchford, a/k/a “Pakpong Kriangsak”, weren't charged until 2016 and 2019 respectively, almost twenty years after the war concluded.

In the US charging document for Latchford, correspondence evidence by the collector-dealer brazenly admits to his informed role.  Speaking by email to a colluding market colleague, discussing a recently plundered bronze head, Latchford writes:

“was recently found around the site of the Angkor Borei group in the N E of Cambodia, in the Preah Vihar area. They are looking for the body, no luck so far, all they have found last week were two land mines !! What price would you be interested in buying it at? let me know as I will have to bargain for it.”


Latchford also sent this same dealer another email that included a photograph of a standing Buddha still covered in dirt.  In this email he exclaimed:

“Hold on to your hat, just been offered this 56 cm Angkor Borei Buddha, just excavated, which looks fantastic. It’s still across the border, but WOW.”

Interestingly, source-country export licenses never accompanied any of these pieces, known to be in movement after the invention of email, and long after Cambodia's laws for the protection of their culture were implemented.

The dealer groups also never seem to mention that OTHER civil war in the Middle East. You know, the multifaceted civil war in Lebanon, Al-Ḥarb al-Ahliyyah al-Libnāniyyah, which lasted from 1975 to 1990 that was also responsible for 120,000 deaths and created one million refugees.

The Lebanese civil war was one of the most devastating conflicts of the late 20th century.  During that war, and from the Temple of Eshmun alone, excavated in 1967 under the oversight of French archaeologist Maurice Dunand, numerous artefacts were stolen in 1981 when a storage depot the Jubayl/Byblos Citadel fell to armed members of al-Katd'ib (the Phalangist Party).  Of those only twelve have been painstakingly identified and restituted back to Lebanon from various collectors and dealers.

• one male head and three male torsos identified in a 1991 catalogue for Numismatic & Ancient Art Gallery, managed by Azzedine El-Aaji and  Burton Yost Berry in Zurich;


• one male torso and one sarcophagus fragment offered for sale by Sotheby's London in its 8 December 1994 auction;


• a marble male torso located with the Dorotheum Auction House in Vienna in 2000;


• a marble male head identified by Jean-David Cahn in Basel and self reported for return in 2006;


• a marble male torso identified with Galerie Gunter Puhze in Freiberg, Germany in 2017;


• a marble bull's head, a torso of an athlete, and a torso of a calf bearer identified with purchases by collectors, George Lufti, Michael Steinhardt, and Lynda and William Beierwaltes in 2017.

That was all, until this year.

Last week marked the latest action in an effort by the Manhattan district attorney, Cyrus R. Vance Jr., to seize looted antiquities discovered in New York City in order to return them to their countries of origin.

One of those seizures turns out to be an ancient object, once described as a 130 CE Roman Marble Life-Size Portrait Head of an Athlete, also previously excavated at the Temple of Eshmun in Sidon and also stolen in 1981. 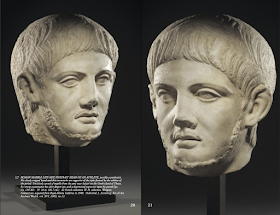 This marble head was seized at Royal-Athena Galleries, a New York City-based gallery that is operated by Jerome Eisenberg.  According to authorities, once Royal Athena became aware of the evidence, they completely cooperated with the Manhattan DA’s Office and consented to the head’s return to Lebanon.

Roman Marble Life-Size Portrait Head of an Athlete, possibly a pankratist. His closely cropped beard and thin moustache are suggestive of the styles favored by the athletes of the period. Sensitively carved of marble from the area near Saliari on the Greek island of Thasos, his strong countenance has alert deepset eyes and a  determined expression upon his parted lips.  Ca. 130 AD H 10 in. (26.7 cm) Ex French collection; W.H. collection, Westport, Connecticut, acquired from Royal-Athena Galleries in 1988.  Published J. Eisenberg, Art of the Ancient World, vol XVI, 2005, no 12.


Even if scientific analysis of the statue-grade block of marble used for this magnificent sculpture were to reveal that the slab came from the Saliari marble quarries on Thasos, the movement of raw materials between the Phoenicians of Lebanon and the Greeks was common in antiquity.  But while the stone used for this sculpture could confuse dealers and collectors to the country of origin, its accompanying paperwork should not have.

Who were the owners Eisenberg codified as the "Ex-French collection" and "W.H. collection, Westport, Connecticut" and what export documentation was provided, if any, to justify this sculpture's legitimacy in the ancient art market?  These finer case details have not yet been made public by the New York authorities, and like the previous twelve recovered antiquities from the Temple of Eshmun, may further clarify which other ancient art dealers handled objects stolen during the Lebanese civil war,  and with whom or where they purchased them.

This new seizure in New York illustrates the difficulty faced by source countries in identifying historic conflict antiquities simply by trolling through every catalog, for every auction ever created, by any dealer, in any language in any country around the world; especially when the material used to create the artefact traveled, and might intentionally or unintentionally result in the object being mislabeled as coming from another country altogether.

In closing, I would like to underscore something as it relates to the difficulty in identifying conflict antiquities, and the seemingly impossible task faced by scholars, law enforcement, and source country ministries in bridging the gap between locating their plundered artefacts after the fact, years after these antiquities have infiltrated the ancient art market. I would also like to comment on how determining all the culpable hands these objects have passed through on their way to fine gallery showrooms in New York and other cities is a slow and tedious process which is not always a straight line to a restitution victory.

As this single incidence of plunder illustrates, the Lebanese Republic could not have reported this 1981 civil war-era theft to the Art Loss Register because the ALR had not yet been founded.  Even in 1991, after the ALR came into existence and began the never-ending task of archiving stolen objects around the globe, the archival photos for this theft, useful in cross-matching the stolen Temple of Eshmun objects, were only in the hands of a single foreign scholar, and not the Lebanese authorities.  This left the Ministry of Culture in Lebanon at a marked disadvantage for being able to prove irrefutably what objects in circulation absolutely belonged to them, and were in fact stolen from the Byblos Citadel antiquities depot during their civil war.

It wasn't until Professor Rolf Stucky, the former Head of the Department of Classical Archaeology at the University of Basel in Switzerland, and a colleague of archaeologist Maurice Dunand, published two books in 2005 that the Lebanese authorities got a much-needed lead which helped in the recovering of their antiquities.  Stucky's books contained critical photos that he had taken while working in Lebanon between 1973 and 1974 which matched with written excavation records for objects known to have been excavated at the Temple of Eshmun.  With these photos, the Lebanese authorities could start to sort out which artifacts had been stolen from the Byblos Citadel antiquities depot and already recovered and which objects were now known to still be missing.

Even with identifiable photos as to what belonged to whom, there are simply not enough eyes monitoring the ancient art market and too many mediums by which antiquities are sold, often misidentified, for source countries to recover all of their losses before the statute of limitations in various market countries makes investigations futile. In 2017, in seeking the seizure of the Temple of Ishmun Bull's head, Assistant District Attorney Matthew Bogdanos spoke to the cases he had worked on stating that his efforts had resulted in "multiple convictions, the seizures of thousands of antiquities totaling more than $150 million, and the repatriation of recovered antiquities to half-a-dozen countries".  And that's just the illicit antiquities in circulation that one State authority, with a dedicated prosecutor and a trained group of researchers, has managed to successfully detect.

What about the countries and cities where we don't have enough provenance eyes or a vigilant public prosecutor?

So when the market responds that they satisfactorily self-monitor, or that the problem is with only a few bad eggs, or that the sector doesn't see a wide-spread problem with blood antiquities circulating which requires legislative oversight...

I beg to differ.