Banksy's "the Sorrowful Girl", stolen from Bataclan Concert Hall has been recovered. 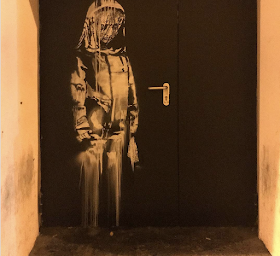 When insult, (the theft of a Banksy artwork) was added to injury, (the tragic deaths at Bataclan Concert Hall) no one would have guessed the artwork would be recovered in the countryside of far off Abruzzo in Italy.

Banksy's memorial artwork, "the Sorrowful Girl", was painted on one of the Paris theatre's emergency exit doors, and soulfully depicts an unusually dressed woman with a slightly bowed head. The single colored artwork had been placed at the concert hall by the British street artist in remembrance of the lives lost during the 13 November 2015 terrorist attack during an Eagles of Death Metal concert.  On that night, 90 concert-goers died.  Others, luckier perhaps, but equally scarred, fled terrified and frightened, some through the very door the artwork had once been painted on.

On 26 January 2019 last year, Banksy's commemorative artwork was stolen, hacked off from the door using an angle grinder power tool before being loaded onto a truckbed. 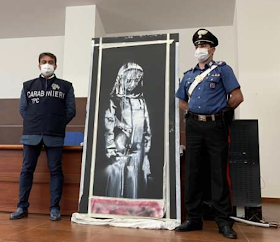 Very little was disclosed during today's tight-lipped public announcement given that the investigation involves a crime that took place in France where an investigation into the theft is ongoing.  No mention was made of who might be involved in the removal of the artwork from France or when and how the Bansky piece ultimately ended up in Abruzzo.

All that was released was that this operation began in March and that the artwork had been apparently been moved on more than one occasion, before being located in an upstairs storage room of a cottage in the countryside, in the province of Teramo.  At the time the search warrant was executed, the tenants living in the property where the artwork had been stored seem to have been completely unaware of what was being stored inside the closed area where the artwork was found.

"Europe is not just a word, it is a common feeling with respect for a complex group of rights that underpin our idea of freedom, which no terrorist act can ever erase. For this reason, I am happy for this operation that gives us back this work that symbolizes mourning for those victims of the terrorist attack in Paris."


No word yet on who, if anyone will be charged in Italy, though the authorities stressed that there does to appear to be any link to terrorism and that the motives for the theft appear to have been purely economic in nature.
at Thursday, June 11, 2020
Share