On March 30, 2016 in Paris, France UNESCO held a large multidisciplinary symposium examining the movement of cultural property in 2016.  The Paris event was facilitated in part because of the conflicts ravaging the Middle East, particularly in Iraq and the Syrian Arab Republic, as well as in Libya and in Yemen, which had led to a surge in trafficking in cultural property, mainly archaeological objects.  The meeting was also arranged to discuss how the sale of antiquities could be used to finance crime highlighting Resolution 2199, which had been unanimously adopted by UN Security Council on 12 February 2015.  By holding the meeting UNESCO hoped to:

"bring together for the first time market stakeholders, including representatives of auction houses and online platforms, museum representatives, cultural heritage experts, specialized intergovernmental and non-governmental organizations as well as Member States, to take stock on the situation of the illicit trade in cultural heritage and identify areas to improve synergies and strengthen international cooperation to successfully overcome this worldwide issue."

Invited speaker Vincent Geerling, Chairman of the Board of the International Association of Dealers in Ancient Art (IADAA) and then-director of Archea Ancient Art gallery in Amsterdam told the audience in Paris, as he had previously in Berlin in 2014, that many art dealers and sellers have good knowledge of where their stock originates from, but acknowledged that consignors haven't always kept good paperwork to prove it.  Asking for a show of hands from the audience, Greeling asked if any of the UNESCO invitees had ever inherited an antique from a relative that came without its original collecting documentation.

When discussing collection histories as they relate to the current situation in the MENA region, Geerling proclaimed, complete with an accompanying powerpoint slide, that:

"during the past two years, IADAA has checked with every member to ask if anything from the troubled areas had been offered and they reported back not a single dodgy Syrian or Iraqi object had been offered to any of our members"

Laster, in June 2016, Geerling spoke again, this time at the ArtConnoisseurs 2016 series, held in conjunction with Cultures – The World Arts Fair in Brussels.

In that talk, recorded in the video above, Geerling discussed IADAA's strict form of due diligence and highlighted in his slides that the Association maintained a code of ethics which included due diligence guidelines for members dealing in Classical, Egyptian and Near East antiquities. During this lecture Geerling went on to say:

"the past is a funny place, they do things differently there.  In the 1960s and ’70s...the old days... not all dealers in ancient art behaved like virtuous schoolboys, but those who founded the International Association of Dealers in Ancient Art in 1993 understood that a different attitude was vital and acted on the UNESCO 1970 Convention even before their respective governments did."

Geerling also proudly stated that membership [in IADAA] is highly sought after, but hard to achieve, and that applications are rigorously vetted.  Like with the earlier UNESCO presentation, Geerling underscored that:

"During the past two years, IADAA has checked several times with every member to see if they have been offered anything from the troubled areas, and they reported back: no, not a single questionable Syrian or Iraqi object had been offered to any of our members."

I guess he should have widened his illicit antiquities membership query to include Egypt as two of IADAA's French members, Didier Wormser of Galerie l'Etoile d'Ishtar and David Ghezelbash of David Ghezelbash Archéologie are currently under investigation and have been indicted in France for their handling of illicit Egyptian material.

Wormser's investigation goes back a full two years before Geerling's presentations, to 2014, and started when French authorities begin looking into his involvement in the handling of stolen Egyptian artefacts sold on to the Museum of Fine Arts in Budapest.  During his trial, Wormser admitted to the French court that he had purchased a total of six pieces from a looted Egyptian tomb in the Saqqara necropolis via an offshore, British Virgin Islands company, Finatrading Development Ltd., owned by the controversial Swiss businessman, Yves Bouvier. 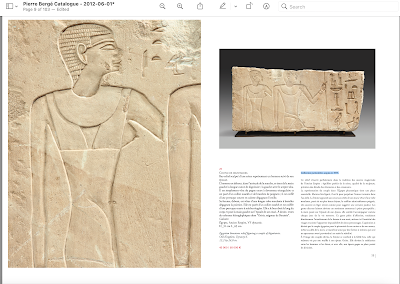 At least one of those, an Egyptian stone lintel, depicting Hau and his wife Khouti " went up for sale in Paris on 29 May 2013.  For 15 years, beginning on/around 2007, the archaeology department of Pierre Bergé et Associés was headed by indicted dealer Christophe Kunicki, a position he held for 15 years prior to his arrest.

As per the Art Newspaper, while standing trial at the Paris criminal court on 30-31 August 2022, Wormser told the court during his that he "stopped buying from Finatrading because it failed to deliver proper provenance documents." Yet the 61-year-old former IADAA-affiliated dealer didn't stop at the purchase of just one or two items from the Swiss Freeport king.  Investigative documents purport that Galerie L’Etoile d'Ishtar purchased as many as 90 antiquities from Finatrading between 2003 and 2005, and then had those objects shipped from Switzerland by Bouvier's Paris connected firm, Art Transit & Associés SA.

According to the leaked Panama papers, Yves Bouvier established Finatrading Development Ltd. via the firm Mossack Fonseca law chambers in the BVI in 1995. This startup date is just one year after Yves Bouvier's father formed Expositions Natural Le Coutre S.A., and shortly before his own fast-moving climb to wealth in the art market and freeport worlds.  Bouvier now rents nearly a quarter of the Ports Francs et Entrepôts de Genève Freeport and owns between 5-6 percent of the Swiss firm.

During the 90-transaction Wormser time frame, as stated in a New Yorker article, Bouvier sold his first painting to Russian oligarch Dmitry Rybolovlev, - Vincent van Gogh’s “Paysage Avec un Olivier.” That pair's art transactions would only begin to raise eyebrows later after the pair fell out and began filing lawsuits against one another.  But the dates of the Wormser and Finatrading Development Ltd. transactions are interesting for another reason.

The 2003 seized ancient objects had been smuggled out of Egypt through a complicated network of identified smugglers which implicated 15 Egyptians, two Swiss residents, two Germans, and one Canadian.  Whether or not the objects Wormser purchased via Bouvier passed through the hands of this clan remains a topic meriting further exploration.

David Ghezelbash, who opened his own gallery in the heart of the Saint-Germain-des-Prés in Paris in 2007 previously overlapped, in 2005, with indicted FRench dealer Christophe Kunicki at Cabinet Jean-Philippe Mariaud de Serres.  Ghezelbash was himself indicted on 23 March 2022 for receiving, fraud and money laundering in an organized gang and placed under judicial control.  Embroiled in the investigation of the Louvre Abu Dhabi's Egyptian antiquities purchases, the Art Newspaper indicated that Ghezelbash has closed his ancient art gallery though he remains listed as a France-based IADAA-affiliated dealer as of the writing of this article.

All of which brings me back to the words of IADAA's chairman in June 2016 when Vincent Geerling stated:

"The trade is as horrified by the destruction and iconoclasm as anyone else and we share a common cause in wishing to defeat it.

The trade has more incentive than anyone else to stop the crooks because of the damage they are causing the reputation of the legitimate trade.

We will not find a workable solution unless all parties to the debate work together, including the trade."

I guess two out of three ain't bad.

ARCA thinks it's time for the trade to put its art market money where its mouth is and to admit that the lack of transparency in the ancient art trade makes it a welcoming home for money laundering and illicit transactions.  One with shell companies and offshore accounts which are designed to shield willing dealers and collectors from risk and which makes law enforcement officers' work in investigating this type of crime all the more difficult.

It is time for IADAA to stop putting their collective heads in the sand and to honestly admit they have no way of monitoring their membership's actions.