Orpheus, the poet, and his two sirens are going home 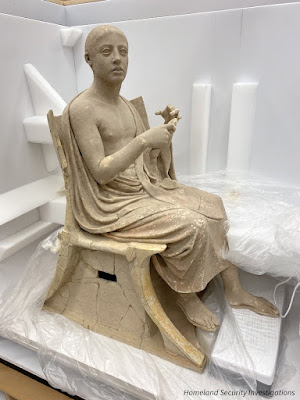 Back in August, ARCA wrote about a 11 August 2022 announcement made by the J. Paul Getty Museum where the museum publically stated its intention to relinquish its nearly-lifesize Apulian sculptural group "Seated Musician and Sirens" to the Italian authorities "after evidence persuaded the museum that the statues had been illegally excavated."

In elaborating on the three sculptures' return, directors Timothy Potts, Maria Hummer-Tuttle and Robert Tuttle of the J. Paul Getty stated "Thanks to information provided by Matthew Bogdanos and the Antiquities Trafficking Unit of the Manhattan District Attorney’s Office indicating the illegal excavation of Orpheus and the Sirens, we determined that these objects should be returned."

Their announcement strategically omitted that the New York Attorney's office had already seized the terracotta sculptures back in the Spring, in April 2022, as part of the Manhattan office's investigation into an accused Italian antiquities smuggler, Gianfranco Becchina. 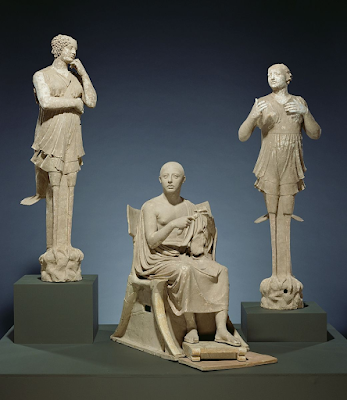 Friday, September 9, 2022, Manhattan District Attorney Alvin L. Bragg, Jr.,  announced the return of these three artworks formal handover to the people of Italy. They were given over in a formal ceremony held at the J. Paul Getty Museum lead by Assistant District Attorney Matthew Bogdanos and Special Agent Robert Mancene from Homeland Security Investigations and attended on the Italian side by General Roberto Riccardi, Commander of the Carabinieri’s Command for the Protection of Cultural Heritage (TPC), Warrant Officer Angelo Ragusa, and Silvia Chiave, Los Angeles-based Consul General for the Republic of Italy.

Originally brightly painted, this large-scale sculptural ensemble was purchased by John Paul Getty Sr.,  the founder of Getty Oil Company, in the spring of 1976 days after they were stolen from a plundered chamber tomb near Taranto, Italy.  Broken into hundreds of dirt-encrusted clay fragments and ultimately reconsolidated, American-born, British petroleum industrialist purchased the 3-statue group, sculpted in Tarentum at the end of the 4th century BCE for $550,000 from Bank Leu, A.G with no known provenance aside from the Swiss bank seller.

The investigation by the Manhattan District Attorney’s Office, working in collaboration with the Carabinieri Command for the Protection of Cultural Heritage, confirmed that the three terracotta artworks at the  Pacific Palisades' museum were sourced by local grave robbers working for Raffaele Monticelli, an intermediary trafficker who today is believed to be one of the biggest fences of archaeological finds coming from Italy, and perhaps one of the top three in Europe. 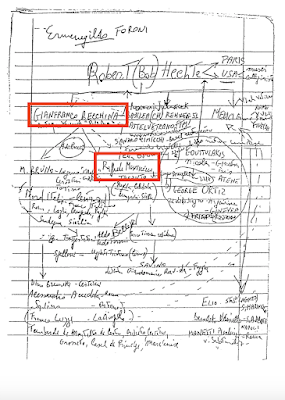 Raffaele Monticelli, sometimes referred to as the “professor from Taranto” is a former elementary school teacher now in his eighties.  He once controlled and financed clandestine excavations which systematically looted large swaths of southern Italy, particularly in Puglia, Calabria and Campania.  Listed on the now famous trafficking organigram, in which two cordata lead to Robert Hecht but by different routes, Monticelli was an active member of Gianfranco Becchina’s cordata.  Numerous transactions between the pair have been well-documented in the Becchina archive.

According to the findings of the DANY investigation and its international law enforcement partner, the broken sculptures were illegally exported out of the Italian territory in contravention of Italian laws and into Switzerland.  Once there, Becchina and Monticelli paid for the nearly-lifesize terracotta sculptural group of a Poet and Sirens to be restored.  Afterward, the sale of the sculptures was arranged through Leo Mildenberg, a Swiss numismatist, antiquities collector, and identified handler of illicit antiquities, via the Swiss private Bank Leu A.G.

According to the Manhattan District Attorney's Office's Michael Steinhardt statement of facts, we can concretise, on page 36, that Raffaele Monticelli had known  relationships with Leo Mildenberg as well as the Sicilian dealer Gianfranco Becchina.

As mentioned in an earlier article, John Paul Getty Sr., wrote in his dairy that these three sculptures were purchased on the recommendation of Jiří Frel, the J. Paul Getty's first Curator of Antiquities, showing how sometimes museum insiders have skin in the game.  Frel, as most Italian trafficking experts know, was later implicated in a number of controversies that ultimately destroyed his career and tarnished the California museum's reputation.  He was ultimately placed on paid leave from the Getty in 1984, before being allowed to quietly resign two years later.
After leaving the Getty, Frel shuttled between residences in Budapest and Italy and at one point even registered himself as being domiciled at the home of Gianfranco Becchina in Castelvetrano, underscoring the closeness of the curator's relationship with the suspect dealer.

When Orpheus, the poet, and his two sirens eventually fly, they will initially go on display in the Museo dell'Arte Salvata (Museum of Rescued Art), housed in the Octagonal Hall at the Baths of Diocletian in Rome.
at Monday, September 12, 2022
Share