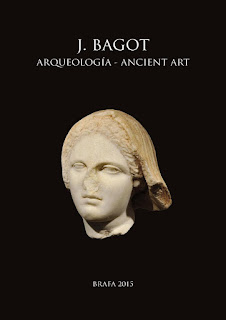 While much has been discussed with regards to terrorism financed via the sale of plundered antiquities, substantiating claims with clear and defined ‘evidence’ is not straightforward. From the outside these networks are labyrinthine, multi-tiered and opaque.  From the inside militants and non-militant criminals are known to conduct illicit transactions with cash and cash alternatives which are, by their very nature, structured to fly below the radar of law enforcement authorities. This makes assessing their impact difficult to estimate and the detection and prosecution of criminals complicated.

Even when uncovered, traffickers involved in the laundering of illicit antiquities usually haven't kept substantive incriminating paper trails that investigators can peruse.  This makes it difficult to determine what their profit margins are on the antiquities they launder.  Nor are people facing charges of laundering antiquities through the art market likely to be forthcoming with incriminating evidence that identifies who else has benefited from the layered transactions that occur from the time the object is looted from an archaeological rich region until the antiquity reached the identified via a collector, dealer, gallery, or auction house.

All this to say that those involved in the illicit market don't advertise their relationships with known criminals and the same holds even more true when the profiteering parties have direct or indirect business dealings with transnational criminal networks or militant organizations.  Additionally the economic behavior of terrorist groups and transnational criminal networks during conflicts share many of the same characteristics, methods and tactics.  Both operate in secrecy and little is known about how groups such as these coexist and, or, interact within the same geographic space.

But like any legal supply chain does, an illegal supply chain matches supply with demand. So while much of our evidence of where the proceeds of transnational artefact crime finish is condemned by the market as being overly anecdotal, what we see clearly is from what regions illicit contraband flows.  From there we can extrapolate that illicit antiquities originating in countries of conflict, from zones where terrorists or militants have a controlling stake territorially, are by extension, a viable revenue stream for terrorism.

Where the two chains, the legal and the illegal, meet.


This month after almost three years of investigations, involving some fifty law enforcement officers, Spanish authorities have brought formal charges against two individuals for their alleged participation in a crime of financing terrorism, belonging to a criminal organization, concealment of contraband and use of forgery for their roles in facilitating the sale of illicit antiquities.

On orders from the Audiencia Nacional, a special high court in Spain with jurisdiction throughout the Spanish territory, as well as over international crimes which come under the competence of Spanish courts, Barcelona antiquities dealer Jaume Bagot and his partner Oriol Carreras Palomar are being investigated for their purported roles in illiit trafficking.  Both have been taken into custody for their alleged role(s) in the sale of Greek and Roman antiquities plundered from Libya and Egypt, which prosecutors believe were then being sold through the licit European art market purporting to be antiquities from historic collections.

Answering to the charges, the pair appeared before Judicial Magistrate Diego de Egea of the Central Court of Instruction Number 6 of the National Court on Monday, March 26, 2018 where they were formally informed of the allegations against them. During the hearing the magistrate granted their release pending trial, imposing a financial surety (bond) and a series of pretrial release conditions which included the forfeiture of their passports, a mandate to remain within the territory of Spain, and biweekly court appearances as conditions of their release while awaiting trial.

Jaume Bagot established his gallery, J. Bagot Arqueología Ancient Art Gallery in 2005 in the heart of Barcelona.  According to his profile on the BRAFA art fair website, where he is a vetted dealer of ancient art, Bagot's firm specializes in the sale of art from the Etruscan, Greek, Roman and Egyptian civilizations, from Mesopotamia, the Middle East, Gandhara and from various Pre-Columbian cultures. No mention of Libyan cultural objects are mentioned in his BRAFA profile, and yet, police authorities in Spain have seized sculpture which originated from three cities of Libya: Albaida, Apolonia and Cyrene, some of which are believed to have been looted while the territory was under the control of Islamist militant groups.

Bagot's gallery is listed as a member of the influential dealer association C.I.N.O.A. (Confédération Internationale des Négociants en Oeuvres d'Art), as well as the F.E.A. (Federación Española de Anticuarios) where they list him as Jaume Bagot Peix, and where he is also identified as the vice-président of the  Professional Group of Antiquarians of the (Barcelona) Royal Shipyard (Asociación de Anticuarios de las Reales Atarazanas).

In addition to forming strategic affiliations within the art market's important dealer associations, Bagot's gallery's "about us" page assures potential collectors that he is an ethical dealer by stating:

"Our main objective is to offer original ancient works of art guaranteeing their authenticity and maximum quality while at the same time strictly complying with the laws of protection of national, foreign and UNESCO heritage."


"We also carry out exhaustive research into the provenance and previous ownership of the pieces. To this end we make use of the  data base [sic] of stolen objects, Art Loss Register, as well as making use of publications, sworn  statements, dated photographs, bills, customs documents and insurance policies."


All of which stands in stark contradiction to the apparent charges he now faces with the Spanish authorities of facilitating the sale of illicit antiquities from regions of conflict where terrorist actors might have been involved.

Criminal actors and investments in the legitimate art economy:
The making of a case = Good (unfortunately usally unpaid) research.

As is all too often the case, some of the best evidence collected highlighting trends in the field of illicit trafficking, is research conducted by unpaid academics, as there has been little funding up until now, made available at the national or multinational level in market countries to financially support the type of in-depth specialized research required by provenance experts studying the flow of illicit objects onto the licit market.  This holds true as well for this particular Spanish investigation, which got its start thanks to an academic researcher.

Looking at evidence useful for understanding the culture and history of ancient Cyrenaica, which thrived between the 6th century BCE and the 4th century CE, Belzic uncovered a worrisome correlation between the looting and destruction that has occurred over the past twenty years at the Greek necropoleis of Libya and an uptick in the number of ancient objects, identifiable solely to that specific region, appearing on the international art market. In conjunction with this increased availability of ancient material surfacing on the art market, he also noted that tomb destruction in the region had risen exponentially, in part as a result of the longstanding instability in the region, but notably over the last ten years in conjunction with items appearing in the market.

Speaking with Morgan about his research last summer, during an informal ARCA meeting of academic antiquities researchers, he told me that while the material remains, the alabaster, glass, and terracotta, found in the tombs of Cyrenaica could likewise be found in other Hellenistic regions, making it difficult to pinpoint the country of origin for looted antiquities of these types, the deities and funerary portraits of Cyrenaica are an exception.

Belzic explained that these sculptures are quite specific in their iconography and style, making it possible for experts, familiar with the sculpture of Cyrenaica, to objectively identify pieces from the region.  Then when these types of sculpture come on the market,  with limited documentation that does not match with existing established collections, one can begin to question their legitimacy and whether or not they may have come from ransacked tombs before making their way into some of Europe's prestigious galleries.


With two rival governments, and countless local militias in Libya, Belzic understood that the probability of staunching the flow of illicit objects following out of Libya could only be tackled by disrupting the demand side of the supply chain.  With that in mind, he turned his research over to law enforcement authorities in Spain who began their lengthy investigation building upon the foundation of his academic research.

In an interview with Crónica Global Media “JBP,” as the Catalan antiquarian prefers to be called, denies any direct involvement with purchasing antiquities from parties in Iraq, Libya or Syria.  He goes on to add that all the items in his inventory have been purchased in good faith, without knowing that the objects in question had been stolen or looted.  His statements imply that any illegal antiquities that made their way into his gallery's inventory did so by honest, unknowing mistake, rather than willful ignorance or a lack of due diligence.

Bagot’s statements are telling as they touch upon the legal framework, technicalities and procedural obstacles that the dealer may try to use in his defence and when fighting any cross-border restitution claim presented by Libya and Egypt in relation to the seizure of his merchandise. It is this culture of willful impunity, the eye's closed "I didn't know" approach which has, for so long, contributed to the challenges of preventing the illegal trafficking of cultural objects through the means of prosecution.

Unless we establish mandated due diligence accountability for dealers, those who deal in the grey area of the market will continue to rely on the legal conceptualizations of property and ownership in countries favourable to their mercurial transactions.

Last week I spoke at an UNESCO-EU-funded conference in Paris entitled “Engaging the European Art Market in the fight against the illicit trafficking of cultural property” where I recommended more dedicated public prosecutors and law enforcement officers assigned to focus on art crimes, and building capacity (i.e. funding) in support of experts dedicated to analyzing trafficking from regions at risk.   Belzic, who sat beside me, listened thoughtfully to Erika Bochereau, General Secretary of C.I.N.O.A. (Confédération Internationale des Négociants en Oeuvres d'Art) as she said “It is in the interest of dealers to work only in the licit trade because their business depends on it.”

I wonder what the confederation's stance will be now that one of their members has come under prosecutorial scrutiny.