ARCA has been informed by Christos Tsirogiannis that he had identified two potentially tainted antiquities, scheduled to be auctioned by Christie's auction house in New York on 18 April 2018.  The antiquities researcher had notified law enforcement authorities in late March.

On April 11th, 2018 one of these objects is now listed as withdrawn from the auction.

Lot 26, an Etruscan 'Pontic' black-figured neck-amphora attributed to the Paris Painter, Circa 530 BCE. was listed in the auction documentation, before its withdrawal with an estimated sale price of $30,000-50,000 USD. 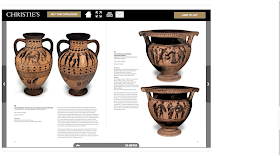 The provenance published with this object is:
"with Galerie Günter Puhze, Freiburg.
Acquired by the current owner from the above, 1993." 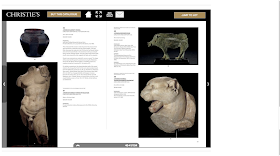 Exhibited:
"The Metropolitan Museum of Art,
Antiquities from the Collection of Christos G. Bastis, 20 November 1987-10 January 1988."


Tsirogiannis matched the black-figured neck-amphora with two Polaroid images found pasted onto a 22 June 1993 document located within the confiscated archive of Sicilian antiquity dealer Gianfranco Becchina. The white piece of paper describes the scene depicted on the object, while the two photos pasted to the document show the same antiquity prior to its restoration.  In this image, the vase is still broken into many fragments and is seen with soil and salt encrustations.   The dealers handwritten notes on the page include numeric notations and refer to an individual named "Sandro."

Becchina's archive, an accumulation of business records, seized by Swiss and Italian authorities in 2002, consists of some 140 binders containing more than 13,000 documents related to antiquities, bought and sold, which at one point or another are known to have passed through Becchina's network of illicit suppliers. 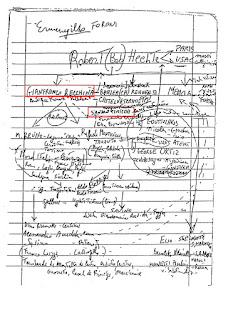 As those who are familiar with Peter Watson's and Cecilia Todeschini's book, The Medici Conspiracy may recall, numerous handwritten notes and lists of antiquities, invoices, and etc., found in the Becchina archive refer to Sandro Cimicchi, an artifact restorer based in Basel, Switzerland.

This is interesting in that one of the supply chain elements in Becchina's enterprise frequently foresaw a first phase of restoration on the plundered artwork, then the subsequent creation of false attestations on the antiquity's origin, made possible also through the artificial attribution of ownership to associated companies.

Cimicchi's name also appears on a comprehensive hand-written organisational chart written by dealer/trafficker Pasquale Camera which was recovered by the Italian authorities in September 1995 during a Carabinieri raid.  This ‘organigram’ has been useful to Italian investigators and cultural researchers in piecing together members of this well known trafficking TOC group.  Starting from the bottom and working your way up, this document references everyone from tombaroli, to intermediaries, to restorers, to mid-level Italian dealers (Gianfranco Becchina and Giacomo Medici), and lastly, to wealthy international dealers Robert E. Hecht and Robin Symes.

Cimicchi name has consistently been connected with illicit antiquities dealers and had been noted to have been Gianfranco Becchina's usual restorer.

Becchina was convicted in 2011 for his role in the illegal antiquities trade yet, this antiquity's passage, through or between Becchina and Cimicchi, has not been listed in the provenance details which were published by the Christie's auction house for its upcoming sale.

Tsirogiannis informed me that the second object, the Roman bronze boar, is depicted in two separate professional images in the business archive records of Robin Symes and Christos Michaelides,  two other high-profile art dealers we have written about in detail.

The Becchina and Symes-Michaelides archives were presented publicly by the Italian judicial and police authorities during the trials of Giacomo Medici, Gianfranco Becchina, Robert Hecht, and dozens of Italian tombaroli in Rome from 2000-2011. Like the Becchina archive, this Greek file features a stash of images seized during a raid on the Greek island of Schinousa, that once formed the stock of Robin Symes and Christo Michaelides.

Unfortunately, neither Symes nor Michaelides appear in the provenance documentation published by Christie's for the upcoming sale on the Roman bronze boar.

With regularity, objects such as these, connected to tainted antiquities dealers, known to have profited from the trafficking of illicit antiquities, appear on the licit market.  Since 2006 Tsirogiannis, a Cambridge-based Greek forensic archaeologist, affiliated researcher and summer lecturer with ARCA's Postgraduate Program in Art Crime and Cultural Heritage Protection, has, with some regularity, identified antiquities of suspect origin in museums, collections, galleries and auction houses, liking passages in their collection histories to Giacomo Medici, Fritz Bürki, Gianfranco Becchina, and Symes-Michaelides.

As part of a rigorous due diligence process, auction houses are encouraged to check with the Italian or Greek authorities to ensure that the antiquities going up for auction are clean, so as not to pass tainted objects on to new owners.  Yet dealers in the art market sometimes forgo this due diligence step, as talking with the  law enforcement authorities, means they would likely be required to provide the name of the consignor, should the archive control, come up with a matching incriminating photo.

As this poses problems of confidentiality for dealers, this step, is too frequently omitted, leaving the only way for matches to be made being when pieces like this  ancient vase, or bronze boar, or marble statue, or Roman glass bottle, eventually comes up for sale during a public auction. Given that TEFAF's newly released report states that there are more than 28,000 auction houses trading world-wide, the task of monitoring them all becomes gargantuan.

In UNESCO's recent “Engaging the European Art Market in the Fight against the illicit trafficking of cultural property”  I suggested to personnel of the art market on hand for the meeting that the legal conundrum of client confidentiality could be circumvented by auction houses and dealers implementing a policy whereby the consignor themselves contacts the Italian and Greek authorities for a check of the the Medici, Bürki, Becchina, and Symes-Michaelides archives before the auction house agrees to list these topologies of antiquities up for auction when the provenance the client has is short on clarity. This would eliminate the auction house's liability for disclosing a confidential client.

While it might slow down the proposed sales cycle, or be an uncomfortable proactive step for good faith purchases who may have unfortunately purchased a suspect antiquity in good faith in the past, it would be the market's ethical step towards not furthering the laundering by selective omission and it would begin to help collectors understand that their purchases and eventual sales now need to be ethical ones given the onus for ethical behavior being placed on them.

ARCA hopes that by continuing to publicize the frequency illicit antiquities penetrate the legitimate art market, with provenance irregularities such as these seen in these two identifications, will encourage auction houses or collectors themselves to adhere to more accurate and stringent reporting requirements when listing their object's collection histories.  It is only in this way that new buyers do not continue to launder objects with their future purchases, further prolonging the damages caused by the the illicit antiquities trade.
at Wednesday, April 11, 2018
Share