At the request of the Manhattan district attorney's office, the Hon. Ellen N. Biben, Administrative Judge of New York County Supreme Court, issued a seizure warrant for an ancient Etruscan terracotta vessel, in the shape of a reclined rabbit.  Listed as a Hare Aryballos, circa 580-560 B.C.E., the unguentarium was seized by New York authorities at Fortuna Fine Arts Ltd., a firm which specializes in antiquities and numismatics, located at 3 East 69th Street in New York City. 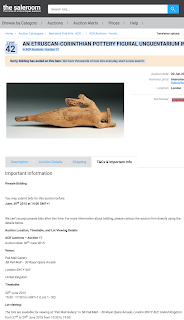 Earlier, on 30 June 2015, this same aryballos sold for £950 in London via Rome-based Bertolami Fine Arts through ACR Auctions, an online auction firm used by the Italian auction house.

PROVENANCE: From an European private collection.

The New York gallery where the seizure warrant was executed is managed by Selim Dere, Founder and Erdal Dere (son of Aysel Dere and Selim Dere), President of Fortuna Fine Arts.   There is no information available at this time as to whether or not Mr. Dere had valid import and export documentation.

Prior to moving to New York, Selim Dere was reportedly arrested by Turkish police, along with cousin Aziz Dere and art dealer Faraç Üzülmez for their roles in the smuggling a marble sarcophagus depicting the twelve labours of Heracles from Perge, Turkey.  Purportedly sliced into pieces for transport, part of this sarcophogus was repatriated by the John Paul Getty Museum to Turkey in 1983 while others were located in Kessel, West Germany.


In June 2009, the owner of Fortuna Fine Arts was stopped upon arrival at John F Kennedy International Airport following a flight originating in Munich, Germany where he had stated on his entry documentation that he had nothing to declare. Despite that affirmation, a physical examination of his person and luggage uncovered three artifacts: a red intaglio stone, a Byzantine gold pendant, and a terracotta pottery fragment. All three objects were seized by U.S. Customs and Border Protection on the basis of 18 U.S.C. § 545 (1982) and19 U.S.C. § 149 (authorizing penalties for failure to declare articles upon entry into the United States) and authorizing Customs agents to search and seize property imported contrary to U.S. laws).

In 1994, acting on an international letters rogatory from the Turkish Government, FBI agents from the New York field office went to the Fortuna Fine Arts gallery, then located on Madison Avenue, and seized the relief head of the mythological hero Meleager and the frieze block from the Tiberius portico, depicting a garland of fruit leaves and flowers wrapping around a young male mask taken from Aphrodisias, an ancient Greek Hellenistic city in the historic Caria cultural region of western Anatolia, Turkey. 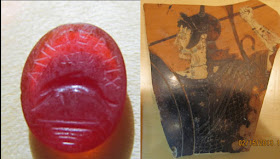 In March 2013, the intaglio and pottery fragment were examined by the Archaeological Director of the Special Superintendent, MiBACT in Rome, Italy, who determined that both objects were of Italian origin and had likely been illegally looted from an archaeological site somewhere in Italy.

**NOTE:  This article was updated 01 July 2018 to reflect repatriation details of partial sarcophagus to Turkey in 1983.