Recoverable or Not? The sale of the Assyrian gypsum relief of a winged Genius, reign of Ashurnasirpal II, circa 883-859 BCE 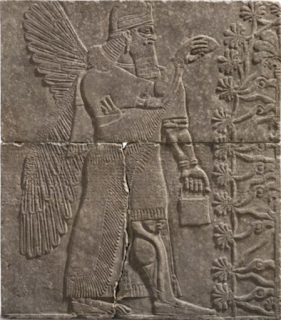 In March 2015, the Iraqi government formally announced that the Islamic State of Iraq and the Levant, ISIL had purposefully destroyed much of the Northwest Palace of King Ashurnasirpal II as part of their iconoclastic program of obliterating preislamic cultural heritage monuments in their original archaeological contexts.  But despite the worldwide outrage at the time of this tragedy, most of the general public had already forgotten about the losses faced by the Iraqi people by the time the Virginia Theological Seminary publicly announced, on April 13, 2018, that it would be selling one of their own objects from Nimrud.  On that date, the trustees announced that for various reasons, they had decided to sell their own seven-foot carved gypsum alabaster panel from the now-destroyed palace, a relief known as "The Bearded Winged Apukalu." It's auction is set to occur at Christie’s Antiquities Sale in New York on the 31st of October.

Until very recently, the press hardly noticed the upcoming sale.  This despite the fact that art historian Kiersten Neumann drew attention to the upcoming event via Twitter on May 22, 2018.   The auction of this rare piece of history was also of much talk by Assyriologists and museum professionals around the world.

From ARCA's calculations there are at least 76 known public collections and 6 private collections which contain material culture from the Northwest Palace of King Ashurnasirpal II.

The last Assyrian relief to appear on the legitimate ancient art market sold to Noriyoshi Horiuchi after a bidding war between the Japanese antiquities dealer and an Italian phone bidder in 1994.  At that time, the relief sold for an eye-popping 7.7 million British pounds, a price 10 times what the auctioneers at Christie's had estimated.

The Horiuchi-purchased bas-relief, like the one at the VTS, was excavated in the mid-19th century in what is now Iraq by British archeologist Sir Austen Henry Layard.  It was then given over to Sir John Guest, then owner of Canford Manor, who helped to pay for bringing the finds from Nimrud back to Britain.  That piece of the palace is now on display at the Miho Museum in Kyoto, Japan.

The public however only seems to have taken notice in the VTS relief months after the Seminary made its announcement and only after the high dollar estimate the object is likely to bring started arousing interest in the major news outlets.

Like with the relief purchased by Horiuchi, the VTS relief was also excavated sometime around 1845 by Sir Austen Henry Layard.   Layard in turn is reported to have sold the object to Dr. Henri Byron Haskell, a medical missionary who worked in the 1850's in Mosul.  Haskell was interested in objects from the palace as proof of biblical history, for Nimrud is known as the ancient site of Calah and is mentioned in Genesis 10:11.  Haskell in turn, passed them on to his friend Joseph Packard, then professor and later Dean at Virginia Theological Seminary and the relief was shipped to the United States where it has been housed at the Virginia Theological Seminary since 1860.

Despite being part of the VTS collection for more than 150 years, a recent call for help and appeal from the State Board for Antiquities and Heritage has been made by Dr. Qais Hussein Rashid, Deputy Minister of Culture, Tourism and Antiquities and President of the State Board of Antiquities and Heritage asking for law enforcement intervention asking for help in stopping the sale.  Unfortunately, the evidence is quite strong that the relief was legally excavated and exported in the nineteenth century, which makes preventing the sale highly unlikely.

The three Assyrian reliefs are purported to have reached America in 1859 where their transfer to the Virginia Theological Seminary appears to have been well established.  Packard, citing Rev. J. S. Lindsay, writes that the three slabs, were so valuable that the Smithsonian Institution, on failing to purchase them, had plaster casts made of them (Packard, citing Rev. J.S. Lindsay, 1902, 305).  The relief is also documented in other academic articles including the 1976 article by Ross, J.F. "The Assyrian reliefs at Virginia Seminary", part of the Virginia Seminary Journal 28(1) pages 4-10.

The strength of the Iraqi's claim for the restitution of its heritage in this instance would likely hinge on the applicability of New York penal law, i.e. that a thief can never acquire good title.  To do so, the courts would have to prove that the Virginia Theological Seminary, was is possession of stolen property.  If that were to be the case, the New York District Attorney's office could then seize the property as evidence and then move to release the stolen property under PL §450.10(2)'s mandate that "unless extended by a court order...property shall be released...after satisfactory proof of such person's entitlement of the possession thereof." But this might be difficult, if not impossible for the Iraqi authorities to substantiate.

Despite the somewhat contentious nature of Layard’s early explorations at Nimrud, which were at first clandestine, the intervention of the British government, to gain official support for the archaeologist's excavations from the Ottoman Turkish authorities is well documented.

On 5 May 1846, the Grand Vizier of the Turkish Empire sent a letter to the Pasha of Mosul, based upon the intercession of Stratford Canning, the Viscount Stratford, who partially funded Lanyard’s explorations.  A diplomat who represented Great Britain at the Ottoman court for almost 20 years, Canning spent most of his career as ambassador in Constantinople and was influential in exerting a strong influence on Turkish policy in support of the sultan’s resistance to Russia’s attempts to increase its influence over Ottoman affairs which eventually would lead to the outbreak of the Crimean War.  Through Canning's assistance,  the Brits were able to obtain permission for Layard's excavation.

The vizier's letter reads as follows:

There are, as your Excellency knows, in the vicinity of Mosul quantities of stones and ancient remains. An English gentleman has come to these parts to look for such stones, and has found on the banks of the Tigris, in certain uninhabited places, ancient stones on which there are pictures and inscriptions. The British Ambassador has asked that no obstacles shall be put in the way of the above-mentioned gentleman taking the stones which may be useful to him, including those which he may discover by excavations … nor of his embarking them for transport to England.


The sincere friendship which firmly exists between the two governments makes it desirable that such demands be accepted. Therefore no obstacle should be put in the way of his taking the stones which … are present in desert places, and are not being utilised, or of his undertaking excavations in uninhabited places where this can be done without inconvenience to anyone; or of his taking such stones as he may wish amongst those which he has been able to discover.


In order to succeed in stopping the sale in New York, Iraq as a claimant would have to first prove that they have standing to bring such a cultural claim in a US court.  If the VTS has documentation proving that Layard passed their relief on to Dr. Henri Byron Haskell with the permission of the authorities in power at that time, as the provenance in the auction seems to indicate, the seminary would likely be in the clear to move forward with tomorrow's auction.

Unfortunately this means that unless Iraq has the liquidity to buy back its own cultural patrimony, or is able to find a generous benefactor willing to purchase the ancient relief on their behalf, this reminder of the lost Northwest Palace of King Ashurnasirpal II will unfortunately go to the highest bidder.