Recovered? Anonymous tip may have lead to Picasso's "Tete d'Arlequin" stolen from the Kunsthal in Rotterdam in 2012. 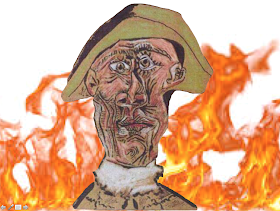 The stolen art works were part of the museum's Avant Guard Exhibition, which highlighted material on loan from the private Triton Foundation collection. Built over twenty years, by Rotterdam oil and shipping magnate Willem Cordia and his wife Marijke van der Laan, the exhibition, was set to run from 7 October 2012 until 20 January 2013, and was the first time any artwork from the Triton Collection had been exhibited publicly.

The Triton body of artworks is made up of approximately 250 paintings, drawings and pieces of sculpture belonging to art movements from 1870 through 1970.  The collection includes works by many by the most influential 19th and 20th century artists in the tradition of Impressionism, Expressionism, and Analytical Cubism.  At the time of the theft, the collection was reputed to be one of the 200 most important private collections in the world.

Shortly after the theft, and as the law enforcement investigation progressed, formal charges were brought against a group of suspects of Romanian origin.   Charges against Radu Dogaru, the ringleader who was found to have orchestrated the heist, his mother, Olga, Eugen Darie and Adrian Procop were all eventually brought.  Around the globe, their trials were closely watched in the hopes that the defendants might shed some light during their testimony on whether or not the seven paintings and drawings remained safe.  Early in the investigation Mr. Dogaru’s mother claimed to have torched the artworks, in order to dispose of the evidence which could be used against her son.

Despite recanting her statement later, experts from Romania's Muzeul Naţional de Istorie a României (National History Museum of Romania - MNIR) provided testimony that seemingly validated Olga Dogaru's grim confession.  Ash and remains analyzed from a stove in her home in the village of Carcaliu in eastern Romania included nails from frames used before the end of the 19th century.  Yet, as pointed out by Maria Vasii, one of the attorney's for the defendants, the only painting with canvas tacks was the one by Lucian Freud.  As that artwork was completed in the year 2000, the nails would not have been made of copper and could not possibly have come from a 19th or 20th century production. Vasii also pointed out that the other paintings which were stolen were canvas glued onto cardboard and had no nails whatsoever.

Despite the questions remaining as to what had actually become of the stolen artworks, Radu Dogaru and Eugen Darie, pled guilty for their roles in the theft on October 22, 2013. As a result of their confessions, the Third District Court of Romania sentenced Dogaru to 6 years and Eugen Darie to 5 years and 4 months (following sentencing appeals) for their involvement in the crime and for membership in a criminal organisation.

Alexandru Mihai Bitu also received a sentence - two years for handling stolen goods. Adrian Procop, arrested in Manchester, England and extradited to Bucharest, was sentenced to prison for four years and 10 months for the formation of an organized criminal group and to four years and eight months for theft. Some of his prison time was reduced as the punishments were slated to run concurrently.

Petre Condrat, involved in trying to find a buyer for the Matisse and the Gauguin, was fined 45,000 Romanian lei, the equivalent of approximately €9642. Dogaru's mother, Olga, was sentenced to two years in prison, convicted of aiding criminal behavior.

Interestingly, during Radu Dogaru's trial he gave a deposition that contradicted his mother's earlier confession to burning the paintings and told the court that his mother made false statements about incinerating the art works under pressure by interrogators. It was believed at the time that Radu may have been motivated by the hope that, along with her recanted testimony, his testimony might help his mother avoid a prison sentence.

Now, six years later, an anonymous letter has been received by a Dutch writer of Romanian origin, Mira Feticu, the contents of which reportedly stated where one of the seven stolen works of art might be found.

But has the stolen Picasso really been spared the fiery furnace?

Painted the year before the artist's death, Picasso's Head of a Harlequin (1971) is an art work done in pen and brush in black ink, colored pencil and pastel on thick brown wove paper.  It measures 38 x 29 cm and is "signed and dated in the lower right corner "Picasso/12.1./71". It was purchased by the Triton Foundation in 2009.

Mira Feticu has told reporters that the letter was sent to her at her Hague address because she wrote a book in 2015 about the Kunsthal theft which was also translated into Romanian.  Following the indications spelled out in a few short sentences of Romanian, Feticu and Frank Westerman have stated that they used the letter to guide them to Tulcea County, Romania.  There, they report they were able to identify the spot underneath a tree where the writer of the letter had indicated the missing Picasso could be found.

Clearing away snow and leaves, the pair told law enforcement that they found the fragile artwork wrapped in plastic.   Photographing it in the car, they then turned the artwork over to the Dutch Embassy in Bucharest. Westerman has since posted video footage of law enforcement authorities examining the work of art on his Facebook page.

For now, a team of DIICOT prosecutors and police officers of the Criminal Investigation Directorate - IGPR will conduct a follow up investigation.  To determine if the drawing is authentic, or part of an elaborate hoax, it has been sent to the National Museum of Art of Romania located in the Royal Palace Bucharest.  There art historians will work to assist in determining or negating the artwork's authenticity.

Insured against losses, in September 2013 the Triton Foundation received a $24 million payout for the theft of their seven artworks from their insurance underwriter, Lloyd's of London.  In doing so, the foundation has relinquished the titles to each of the seven stolen works of art, should any of them ever be recovered.  This means, if this "Picasso" is authenticated, (and that's a pretty big if), the insurance firm would be the rightful owner.

Me, I have my doubts. 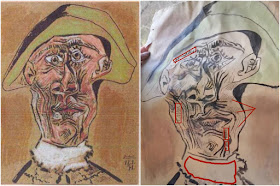 Straightening the image presented by Feticu taken in the car, and then comparing it side by side with the original stolen artwork I see numerous points of difference in addition to many color variations. A few of these I have redlined.  I am not an authenticator, nor am I an expert on Picasso's work, or the degradation of paper drawings over time, but to me, it doesn't seem to be the original, as much as it would make me happy if it were.

Theater makers Yves Degryse and Bart Baele have admitted that the found "Picasso" in Romania is a hoax, part of a publicity stunt for their performance True Copy, which premiered last week.