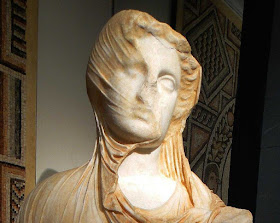 Tuesday, December 17, 2019 agents with the United States Department of Homeland Security - HSI, Immigration and Customs Enforcement (ICE) seized a female funerary statue previously listed for sale last April for an estimated Estimation 500.000-800.000 USD on the online website Live Auctioneers.  The statue, advertised at: https://www.liveauctioneers.com/item/70314848_an-important-life-size-greek-marble-figure-of-a-female  was listed as Lot 0032.  In its description, the dealers had stated that the statue was "an impressive Greek marble three quarter life-size figure of a veiled woman, likely among a handful  [of] available Greek figures for sale." 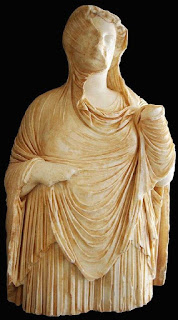 While the auction page for this antiquity has since been removed, the heavy 400 pound statue of a Greek funerary deity from the Hellenistic period, has been identified as having come from Cyrenaica, in present-day Libya, a source nation not mentioned in the description given by the sellers.  This area of the North African country has been the subject of accelerating pillage for more than a decade, sometimes in support of financing criminal groups.  Frequently this plunder destroys irreplaceable archaeological data.

For years the Security Directorate of Shahhat, in Libya's eastern coastal region, has tried to foil the attempts of individuals threatening to tamper with, loot, or destroy antiquities from the ruins of the ancient Greek and Roman city, Cyrene.  But given rampant urban encroachment and the lack of uniform security within Libya's complicated political terrain following the overthrow of Muammar Gaddafi, Cyrenaica's rich archaeological heritage remains vastly underprotected, a fact often overlooked by the media amid its focus of ISIS looting and iconoclasm in Syria and Iraq.

Veiled marble sculptures such as the one seized in New York City are not found in Greece.  They are only found in the ancient Greek cemeteries of the ancient cities of Cyrenaica, the area along the eastern coastal region of what is today modern Libya. These uniquely stylized funerary decorations are easily identifiable as their distinctive styling is not found in any other part of the Classical world.  The alone makes it off concern that the dealers elected to refer to the piece as solely "Greek".

Following the statues identification, concern over the object's pending sale on the ancient art market was widely publicized by the Archaeology Information Network (ArchaeologyIN) through their Archaeology in Libya social media network.  Drawing the public's attention to the fact that plundered Libyan artifacts are regularly appearing on the licit market, the grass roots activist group included a link to the dealer's auction which identified the sellers as Aphrodite Gallery, an online branch of Aphrodite Ancient Art.  Both of these ancient art enterprises are owned and/or operated by Jamal and Jad Rifai.

The object's provenance on the online sales site was listed as:

"Ex. Swiss private collection, from the 1980's, with import document and Art Loss Register certificate."   But the export license? 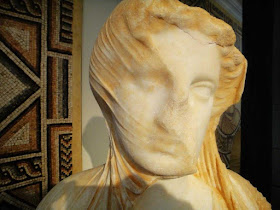 A 2008 cached version of the Aphrodite Ancient Art website (now taken down) stated:

We are the online division of Eros S.A.L., second generation dealers of fine antiquities throughout the Eastern Mediterranean region.

We are excited to offer you an excellent selection of fine antiquities for your consideration.

We unconditionally guarantee the authenticity of each of our objects.

Previous notes on Facebook, also now removed, once indicated that the brick and mortar gallery of Aphrodite Ancient Art opened in Manhattan in May 2012 after operating virtually as far back as 2007.  This date coincides with data captured by the Wayback Machine which maintains archives of some of the company's web pages dating as far back as 2008.  In contrast, the LinkedIn profile of one of the company's principles states that he has been part of the ancient art market in New York operating as Aphrodite Ancient Art since 1999.

The seizure of this funerary statue was taken into consideration based on initial research conducted by individuals working with the Federation of Archaeological Missions in Libya, including Vincent Michel and Morgan Belzic (French Mission), Oliva Menozzi (Italian missions), Susan Kane (US Missions), as well as other unnamed colleagues.  Formal requests for assistance from the Libyan authorities came from Dr. Ahmed H. Abdalkariem, Chairmen of the Department of Antiquities (DOA) in Libya, in coordination with the country's Ministry of Foreign Affairs and the Libyan embassy who worked jointly with the US Federal and local law enforcement authorities. 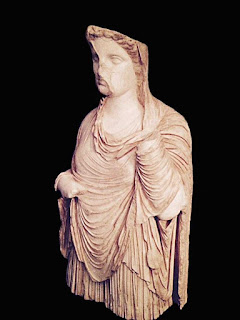 According Morgan Belzic, at the Institut National d’Histoire de l’Art and Ecole Pratique des Hautes Etudes, illicit funerary sculptures from the Cyrenaica region of Libya have passed through the ancient art market with increasing frequency since the start of political unrest in the region. This uptick in sales volume for Greek artifacts plundered from Libya coincides with the suspension, or reduction, of many state services within the country, including those for heritage protection and management,  without which there has been an increase in criminal activity as well as sometimes aggressive pillaging of archaeological sites.  Belzic's conflict antiquities research has centered on the proceeds from the illicit trafficking of objects from the Cyrenaica region which benefit directly the criminal groups who organize the smuggling of looted antiquities out of Libya, selling on to intermediaries and art merchants in both the US and Europe.

But could the dealer have known that the statue was illicit?


Given its distinct style, it seems unlikely that the sellers of this important artifact would not have been able to identify that this statue came from the areas surrounding the ancient Greek cemeteries of the ancient cities of Cyrenaica.  Knowing that, the purported "Ex. Swiss private collection, from the 1980's" and the lack of export documentation of Libya fails to hold water.

The cultural heritage of Libya is protected by both its national laws as well as by multilateral agreements and international instruments.  The 1951 Constitution grants the government control of the country’s antiquities, archaeological sites, and museums. Law Number 11 on Antiquities, Archaeological Sites, and Museums (1953) further obligates the state to protect cultural heritage in peace and wartime and prohibits damage to and illegal trade of cultural property, including exports. Law Number 2 of 1983 and Law Number 3 of 1994 have similar provisions. The latter names the Department of Antiquities (DOA) as the expert authority responsible for management, organization, care and protection of antiquities, museums, manuscripts, ancient cities, and historic localities and buildings.

The current governing document is the Constitutional Declaration, adopted by the National Transitional Council on August 3, 2011, which reinforces that Libya’s legal framework for cultural preservation has remained largely unchanged to date. International agreements to which Libya is a State Party also remain in effect such as the 1970 UNESCO Convention and the UN Convention against Transnational Organized Crime.

On June 16, 2017, the U.S. Department of State published notification in the Federal Register of the receipt of a request from the Government of Libya to the Government of the United States of America requesting import restrictions on archaeological and ethnological material from Libya representing its prehistoric through Ottoman Era heritage.

In their request it was outlined that the United States is a major market, perhaps the single largest market, for sales of archaeological material from Libya. and that between approximately 2007 and 2014, nearly fifteen sculptures based on stylistic composition and other criteria identified as coming from Libya, and known to have come from Cyrene (some documented from the excavation storerooms; others undocumented) have been sold through the ancient art market in the United States or by US based companies operating virtually.

On December 5, 2017, U.S. Customs and Border Protection placed import restrictions on archaeological and ethnological material from Libya to assist in combating the illicit trafficking from the region.
at Friday, December 20, 2019
Share