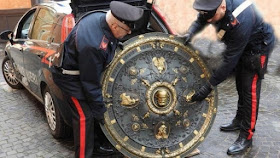 This week, officers from the operational department of Italy's Comando Carabinieri per la Tutela del Patrimonio Culturale and the Rome Gianicolense Station have recovered an important ornamental bronze shield.  The object,  gifted as a sign of gratitude to Giuseppe Garibaldi by the citizens of Sicily in May 1878 was donated to Rome by Garibaldi and first kept in the Capitoline Museum.  Later it was transferred to the National Museum of the Risorgimento located inside the Palazzo del Vittoriano (the Victor Emmanuel II National Monument) complex, where at some point, it disappeared from the collection approximately twenty years ago.

Spanning some 118 centimeters in diameter, the shield was no small thing for a thief or disgruntled employee to have walked off with undetected.  Crafted by Antonio Ximenes, the shield weighs in at close to 50 kilograms.  Intricately decorated, it  illustrates eight engraved allegorical groups which bear the coat of arms of Italy's most important cities.  At the shield's center, the easily recognizable shield boss, or umbo, depicts a likeness of Garibaldi himself. Even more identifiable, the entire shield was etched with a laurel wreath where the names of all 1089 "Mille di Marsala" were engraved.

Given how recognizable this Italian patriot and soldier of the Risorgimento was, and how well published the shield is, having been the subject  of engravings and detailed in various exhibition documents, fencing the historic object after its theft 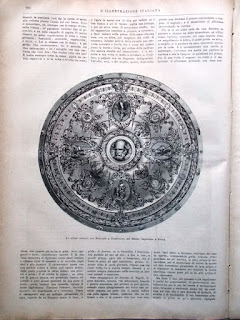 from the museum would have likely drawn considerable attention.  Instead, the shield simply vanished without a trace, only to resurface in the news as having been located in the private residence of a yet unnamed "Rome architect".

Given that the squad is usually quick to name individuals involved in theft or in receiving stolen goods when it comes to thefts of Italy's cultural patrimony, it will be interesting to see if the public prosecutors name who this Rome architect is.   Moreover it is really very difficult to believe that whoever "owned" the object, they were not aware of its illegal origin.