Auction Alert (and Withdrawal): Tunisian treasures up for auction are withdrawn from Coutau-Bégarie auction house in Paris 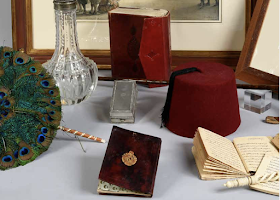 On June 1st, the Institut National du Patrimoine (INP) in Tunisia posted their concerns on their Facebook page about an upcoming auction at Coutau-Bégarie auction house in Paris, scheduled for the 11th of June.  Up for sale was a grouping of Tunisian personal effects, made up mostly of Qur’ans, manuscripts, books of poetry, tunisian djebba, (the country's traditional attire for men), and personal correspondence dating from the reign of the Beys.  The items up for sale were modestly priced, starting at €120 and going upwards to €1500. 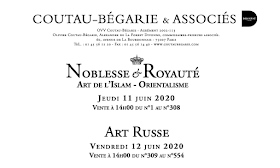 The objects were once the personal property of an influential Tunisian dignitary Mohamed Habib Djellouli, (arabic: محمد الحبيب الجلولي).  Born into a patrician family belonging to the Tunisian aristocracy, Djellouli had served as the Caïd-Gouverneur of Kairouan, Nabeul and Béja and later as the Minister of the Pen and Minister of Justice of Bey.   The Beys he ruled Tunisia from 1613 until 1957, when the modern Tunisian Republic was formed. Djellouli's personal effects, accumulated over years, were passed down to his heirs after his death in 1957, the same year that the monarchy was abolished and the beylical office terminated.

The objects from his private collection drew concerns from the INP as there was no record of the pieces having left the territory of the Republic of Tunisia, and it appears that the transfer was done without the knowledge of the country's Ministry of Cultural Affairs.  It is their job to determine if movable properties fall within the parameters of the cultural heritage code, which explicitly prohibits the export of movable cultural property of national or international historic value.

The country's Ministry of Cultural Affairs was established in Tunisia in 1961 to implement cultural policy on behalf of the country.  The Institut National du Patrimoine (INP) operates alongside the ministry and oversees twenty archaeological and ethnological museums throughout the Republic.  It was the INP who first sounded the alarm to the Ministry of Cultural Affairs in Tunisia regarding their concerns about the sale in Paris.

Tunisia's current law for the archaeological, historical and traditional arts patrimony was enacted in 1994 and amended in 2011.  Known as Decree-law n° 2011-43 and dated 25 May 2011, this updated law increases the penalties for infractions related to moveable heritage.  Under the current national law, article 57, the export of movable property is prohibited though temporary export of movable cultural property is possible, subject to authorization from the Ministry of Cultural Affairs.

Yesterday Ghazi Gherardi, the ambassador and permanent representative of Tunisia to the United Nations Educational, Scientific and Cultural Organisation  - UNESCO announced that all 114 objects related to the "Collection of a Dignitary of the Beylical Court" had been withdrawn from the sale with the auction house sending a communiqué containing a pledge to cease the sale procedures until the competent arbitral authority considers the matter.

And while that withdrawal is a small victory for Tunis, one has to question, for the umpteenth time, what type of due diligence, if any, was performed by Coutau-Bégarie before agreeing to accept these items for the auction, what if any checks occurred at the EU border when these objects arrived on Europe's shore, and what documentation was provided, if any at all, to Coutau-Bégarie by the individuals selling the family property.

Stands to reason that if an auction house has time to develop length object descriptions for one hundred and fourteen items, photograph them, and then design a sales catalog to highlight them, uploading the PDF to their website, they might also have the time to ring up the authorities in Tunisia to ask about the legitimacy of the objects being consigned.
at Saturday, June 06, 2020
Share