Virtual restitutions in the age of Coronavirus and Australian bush fires 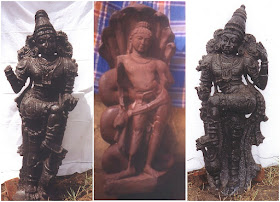 On 27 November 2019 the Australian Prime Minister Scott Morrison formally announced that as a result of criminal law proceedings underway in India and the United States against New York art dealer Subhash Kapoor, Australia would be voluntarily returning three culturally significant sculptures to India.  Five days later, on 2 December 2019 the Australian Government's Department of Infrastructure, Transport, Regional Development and Communications - Office for the Arts announced that the three artworks would be formally given back to the Indian authorities during the Prime Minister's visit to India, in January 2020.

Prime Minister Morrison was scheduled to travel to India on 13 January 2020 for bilateral meetings between Australia and India, at the invitation of Indian prime minister Narendra Modi.  The pair planned to hand over the artworks and discuss the global economy before Morrison headed on to other meetings in Japan.  Those plans, however, fell by the wayside as Australia battled for control over the country's raging bush fires which continued unabated until mid-February, a result of the country's prolonged drought.

The next hiccup to the scheduled meeting and handover was the world-encompassing epidemic, the Novel Coronavirus (COVID-19).

Months later, opting for safety and security over politics, as coronavirus cases in India saw a record single-day jump of 9,304, Australian Prime Minister Scott Morrison and Indian Prime Minister Narendra Damodardas Modi held their first-ever “Bilateral Virtual Summit” on the 4th of June 2020.  This occasion, focused on comprehensive strategic partnerships between India and Australia, and was the occasion to allow Morrison to virtually hand over the pair of 15th century, Vijayanagar dynasty door guardians (Darapala) from Tamil Nadu, and a 6-8th century sandstone statue of the serpent king (Nagaraja) from Rajasthan or Madhya Pradesh, in India. 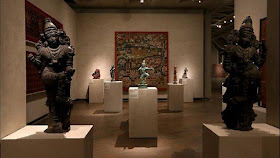 Speaking with S. Vijay Kumar of the India Pride Project, a volunteer organization involved in documenting and tracking stolen Indian artifacts, Mr. Kumar had this to say about the current restitutions:

"The return of the two door guardians, bought by the NGA for USD 495,000 in August 2005 and stolen from Tamil Nadu and the Nagaraja purchased for USD 337,500 in April 2006 from Madhya Pradesh will bring closure to an eight year struggle with the National Gallery of Australia which started with us, along with Mr. Jason Felch exposing the robber photos, showing the objects freshly looted against a vesti and lungi background. We also proved the fake provenance of the certificates issued by Art of Past for these purchases way back in 2015.


The returns are important as they provide much-needed impetus to the sagging criminal trial of Subhash Kapoor by exposing the nexus between him and his associates. The Nagaraja was smuggled out of India sometime in 1999 by the mastermind of the illicit trafficking network in India who went by the codename "SHANTOO" who we now know is Ranjit Kanwar (but whom has yet to be arrested/traced by Indian law enforcement) but more importantly of the Prakash brothers who ran IndoNepal - who smuggled the two door guardians out of India sometime before 2002.


These individuals have been named in the case filing on Kapoor in NYC Aug 2019 by US authorities, providing graphic details of how these stolen artefacts  are cleaned by intermediaries - in this case Solomon who has been since charged with abetting this crime for cleaning and removing any trace of dirt, etc from the Nagaraja and also how Subhash Kapoor used an old typewriter and some old stationery to fool the largest public museum in Australia. 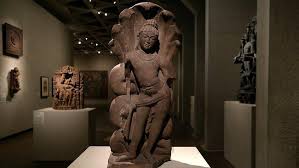 The two Dwarapalas will be sent to India's Idol wing of Tamil Nadu which has registered a theft case related to the pair.  The Serpent King will initially go to the Red Fort Archaeological Museum located in the Mumtaz Mahal of the Red Fort in Delhi.

Kumar, Felch, and arts reporter Michaela Boland have long pushed for the examination and return of suspect Kapoor pieces, imploring the NGA to look closely at the provenance of all works in the museum's collection which were purchased by this dealer or his affiliates.  Extradited to India in July 2012, Kapoor remains incarcerated at Tiruchirappalli Central Prison awaiting the conclusion of his trial in India.  Afterward, the 70-year-old would likely be extradited to the United States to face 86 felony counts for allegedly looting $145 million in antiquities over the last 50 years.
By:  Lynda Albertson
at Friday, June 05, 2020
Share