In April 2019 the Herbert Hoover Presidential Library and Museum cancelled the opening of its Rosetta Stone exhibit after University of Iowa Associate Professor Bjorn Anderson wrote to them about his concerns that 90 of the 125 objects in the exhibit appeared to be “either definite or very likely fakes.”  The questionable items had been purchased by Marty Martin, the CEO of the Origins Museum Institute via Mehrdad Sadigh, also known as Michael Sadigh, a New York-based antiquities dealer who has operated Sadigh Gallery out of the Jewelry Building (Buchman and Fox: 1910) on 5th avenue for decades.

This month, Sadigh, an Iranian immigrant, purportedly from Luristan with a family tree of antiquities merchants, was arrested by law enforcement acting on a State warrant in connection with charges involving his business where it is alleged that the founder of Sadigh Galler was directly involved in counterfeiting thousands of faux antiquities on the premises of his gallery which he then sold to customers.

Sadigh, whose website has now been taken down, (don't worry, there are lots of saved pages and catalogues in various archives), reportedly began selling ancient art at the age of 17.  According to his Linkedin profile, which was still active as of today, he started his business by mail-order and ultimately opened his bricks-and-mortar gallery in Manhattan in 1982.  In the beginning, he sometimes collaborated with Joel Malter and his pieces were, for the most part, considered to be authentic.

But, as the years marched forward, Mehrdad Sadigh became something of a pariah among his fellow ancient art dealers, as well as among schnookered collectors.  Type his name, or the name of Sadigh Gallery into Google and the search engine will spit out a long list of cautionary Buyer Beware stories, many written by frustrated art collectors who poured their money into pieces later determined to be faked. Dealers and seasoned collectors advise ingenious new collectors to avoid purchases from the gallery directly, and the purchase of objects once handled by the gallery.

One 2015 complaint, from a defrauded buyer, is almost prescient.  It outlines how Mehrdad Sadigh came to his home and refunded the collector his money when the purchases through Sadigh Gallery were discovered to be modern copies.  The commenter gave a warning, to novice shoppers, that up until then, no one had sued the dealer, and stating that the Manhattan DA had not (yet) investigated the problematic dealer for fraud.

In fact, up until recently, Sadigh Gallery's "no hassle" return policy for any customer who complained that an object was fake, has helped protect the dealer from a barrage of lawsuits that might have otherwise have been filed, requiring him to testify under oath as to the authenticity and provenance of the objects his gallery sold.  When clients complain, Sadigh simply reassumes the offending item, opens his chequebook and refunds the dissatisfied purchaser without a fuss.  What he hasn't done though, is go back and refund all the uninformed and unsuspecting buyers who have not yet ascertained that they too have been duped.

Frustrated, the collecting community lashed out, taking shots at the scurrilous gallery owner all over the internet.  Buyers wrote complaints about his activity to the Better Business Bureau.  They documented negative experiences on Trip Advisor, and saved damning images to Pinterest boards highlighting the variety of alleged fakes sold as authentic.  They compiled Rip-Off Reports, and even created a YouTube channel replete with dramatic music highlighting the numerous problems with the gallery's merchandise.  One of these videos was even memorialised on the website of ICOM's Observatory for Illicit Traffic.

ARCA's own research documents Sadigh's supply chain via shipping container manifests.  Two of these, picked at random, illustrate that in 2007 Sadigh's imported a container containing 214 "Statues Handycraft" and in 2017 another container with 42 "Statues, Stone Panels, Wooden Panels, Wooden Decoration box".  Neither shipment, as one would suspect from a purported antiquities dealer, describe the imports' contents as anything actually ancient.  Nor has ARCA identified any common handicraft replicas identified as such being sold through Sadigh Gallery's regular inventory.

By 2013 things began to be charged.  A petition was started by Sadigh's customers and collecting advocates, which garnered more than 150 signatures from individuals complaining about the dealer himself or outlining their personal sales experiences with Sadigh Gallery.  Dr. Erin Thompson, who frequently outs suspect material on Twitter, lampooned one of Sadigh's more distasteful sales items, a purportedly ancient Egyptian mummified penis.  Noted as Item 45170 in one of the gallery's catalogues, it is listed both as "Ptolemaic" and "real and lifelike" and can be had for the bargain price of $7,500. 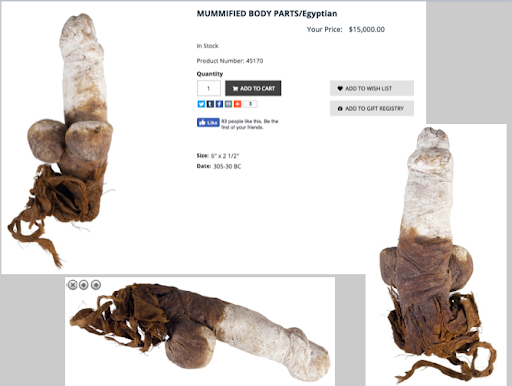 Outraged comment after outraged comment, in various social media groups, as well as on the aforementioned petition, dealers, collectors, academics and art crime researchers spoke out about objects being sold by Sadigh, which all too frequently, turned out to be nothing but cheap tourist tat.  Some items, shipped from Sadigh's gallery with Certificates of Authenticity and signed by the owner, even included translations of inscriptions, which, when presented to knowledgeable experts, have been proven to be fake and their translations problematic.
Sumerian scholars complain that some artefacts listed as Sumerian, once depicted on the gallery's website, are not actually written in Sumerian, or anything that even resembles that ancient language.  Cuneiform scholars, in turn, reviewing cylinder seals, have reported that the writing on some suspect pieces is nothing short of nonsensical gibberish.  Others have reported that some Egyptian objects and their accompanying translations have simply been copied from authentic, published museum pieces.

With that said, by 2021, and at 60 years of age, it is no longer possible to believe that this antiquarian, who has been in the ancient art business for all of his adult life, can still be genuinely ignorant about the authenticity of the material culture he earns a well-paid livelihood from.  The very fact that Sadigh hasn't reconciled his business model after so many complaints, over so many years, and despite having to make repeated refunds to numerous dissatisfied collectors when objects prove to be inauthentic, suggests actionable negligence, not a beginners incompetence.  Or, if the state charges that the New York authorities have filed stick, a demonstratable intent to deceive and to actively and voluntarily commit fraud.

Based on their investigation and on a formal affidavit filed by Special Agent Christopher Rommeney with the Department of Homeland Security - Homeland Security Investigations, Judge Ruth Pickholz, of the Supreme Court of the State of New York authorised a search and seizure warrant on 30 July 2021, to be executed at Sadigh's New York gallery.  Shortly thereafter, a warrant for the arrest of Mehrdad Sadigh was signed on 4 August 2021 in reference to a nine-count indictment, filed by New York District Attorney Cyrus R. Vance, Jr., charging him with:

Sadigh was arrested without incident and had his gallery searched on 6 August 2021.  Once on the premises, officers involved in executing the search warrant found what appears to be a fully functional fabrication studio, which appears to have been used to transform and age simple, modern-day replicas into "ancient" artefacts.
In photos taken during that search, released by the District Attorney's Office in New York,  a series of statuettes are lined up ready for alteration.  One, I have enlarged and highlighted with an arrow showing its placement on the bottom shelf in Sadigh's work studio.
The object in the DA's photo closely resembles Item 54149 in Sadigh Gallery's Early Spring 2020 catalogue.   In the catalogue that object is listed as Ptolemaic, 305-30 BC Carved limestone Ruler, with cartouches on the side and the back pillar.  At the time the catalogue was published Mehrdad Sadigh was selling the doctored Carved limestone Ruler statuette on sale for $1,250.   Its regular list price was $2,500.
In another of the DA's photos, also taken in Sadigh's workrooms, we can see a series of plastic tubs, at least one of which appears to contain what looks to be very fine brown sand.  This tub sits directly beside a scan of Grumbacher spray varnish.  This type of sealant is generally used to protect artwork from environmental damage, not seal in dirt and grime.  Normally one tries to apply a final coat of varnish in spaces where airborne dust particles can be avoided.  This makes this can's proximity to the sand bins as well as a nearby sieve also containing a brown substance, and two darkened Q-tips all the more suspect.
Add to that, law enforcement officers also took photos of panel saws, hack saws, a Dewalt air compressor (possibly used for painting), and what looks to be a bench grinder.  All of which were found in the shop of a man who has never professed to be an artisan, and who has never acted as an artefact's conservator, leaving little room for speculation as to what actually was going on in the back of the Sadigh house.
Adding further controversy is the sheer number of US Postal Service spec sized cartons and bins found throughout the workspace.  This gives some hint as to the potential volume of sales Sadigh Gallery may have had.  It also makes me wonder if this gallery owner might also be charged with federal Mail Fraud under 18 U.S.C. § 1341.
For now, Sadigh has been released on his own recognizance by the State authorities.  In granting his release pending trial, Judge Pickholz ordered Sadigh to surrender his passport and obtain a lawyer.  I think he is going to need one.
By:  Lynda Albertson
at Thursday, August 26, 2021
Share