The lifestyles of Cocainenomics: Dubai Police release video footage of Raffaele Imperiale and announce the arrest of another fugitive Raffaele Mauriello 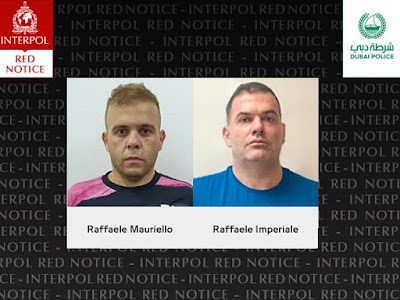 The General Department of Criminal Investigation of the Dubai Police has released a somewhat dramatic video that shows the capture and arrest of fugitive Raffaele Imperiale, the Camorra affiliated boss of the international drug trafficking Amato-Pagano clan which supplied cocaine to Amato and Scarpa, who, years back and already on the run in Dubai, admitted to purchasing two stolen Van Gogh paintings and to his illegal operations in letters to the Italian prosecuting authorities.  Sentenced in absentia, Imperiale is known to have continued working in the illegal drug trade, even after his conviction and despite being named as a fugitive wanted for prosecution in a 27 January 2016 red list notice.

Living under the assumed name, Antonio Rocco, mafia boss Imperiale continued to meet and transact underworld business with affiliates of his crime syndicate in various locations in the UAE city.  Video images of his arrest released by the Dubai police attest that the Italian drug lord was using a Federation of Russia driving license and passport, as at least one means of staying below law enforcement radar.

Scenes in the three-minute video released by police give us a sanitised look at policework in the UAE, as well as a voyeur's peep show inside Imperiale's Dubai digs, complete with luxury cars, a villa, duffle bags containing hundreds of dollars, and boxes of unopened phones, which may have been used to impede wiretaps.  One of the most bizarre images on the film was a rather ironic Avengers artwork hanging on Imperiale's wall.  Hanging next to an elevator, the painting or poster depicts a maniacally grinning Pablo Escobar, recreating the Colombian narcoterrorist's mug shot photo by Colombia's Cárcel del Distrito Judicial de Medellín during Escobar's years of Argento O Piombo. The irony here is not lost as it was with the use of bribes (silver) with a not-so-subtle threat of violence (lead), that allowed the Medellín Cartel drug lord to pump an endless supply of cocaine into the market while remaining free from justice for as long as he did.

Wanted in connection with charges of murder as well as drug trafficking, Mauriello was apprehended in Dubai on 14 August, following closely on investigations coordinated by the Public Prosecutor of Naples, led by Giovanni Melillo, and conducted by the Mobile Squad of the Naples Police Headquarters, led by Alfredo Fabbrocini, with the support of the Central Operational Service of the State Police.

Imperiale's clansman was identified by law enforcement authorities in Italy as having been involved in two mob hits during the violent Third Scampia feud, which resulted in the murders of Fabio Cafasso, killed in Scampia in 2011, and the double murder of Andrea Castello and Antonio Ruggiero, each killed one day after each other in Casandrino in 2014.  Prior to their arrest, Imperiale and Mauriello had been under close surveillance by Dubai investigators from the General Department of Criminal Investigation, aided by analysts working at the Dubai Police Criminal Data Analysis Centre and the “Oyoon” AI Surveillance Programme. The Oyoon (Eyes) project is part of the Dubai 2021 plan to enhance the emirate’s global position in terms of providing a safer living experience for all its (legal) citizens, residents and visitors.