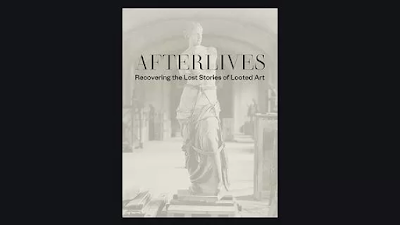 The Jewish Museum’s current exhibition Afterlives: Recovering the Lost Stories of Looted Art is dedicated to the art objects coveted by some of history’s greatest villains: the Nazi regime. Walking into the museum lobby on a cloudy Saturday afternoon (admission is free on the Jewish Sabbath), I found myself at the end of a long line awaiting entry into the exhibition space.  Surrounded by groups of all ages and backgrounds, we waited in an orderly fashion, taunted by the glimpse of a large Franz Marc canvas hanging just beyond the glass doors.

As a provenance researcher by trade, my intrigue was piqued long before I walked through the museum doors: in their review for The Guardian, Jordan Hoffman wrote, “rarely does one walk away from a gallery with a spinning head, thinking of the life led by the paintings, drawings and objects themselves.” And, Ariella Burdick’s Financial Times review argued, “this is not a show about how art is made but about how it’s kept and passed from hand to hand. Material things are haunted by their accumulated history, acquiring emotional freight along the way.”

Once granted entry into the exhibition space, the dramatically lit gallery introduces viewers to the idea of an artwork’s biography, not just its creator, but the journey the physical item takes throughout its existence from creation to owners, to looters, to restitution. Following the trajectory of curation, visitors are given a preliminary introduction to the destruction and sacrifice that arose from the Nazi’s systematic plunder of cultural objects. The wall texts and audio guide address topics ranging from the experiences of “degenerate” artist’s to Rose Valland’s valiant efforts working for the Nazis at the Jeu de Paume to the Jewish Museum’s own role in safeguarding the orphaned Judaica of the Danzig Collection.

In support of this narrative, many of the artworks on display are presented with wall texts that offer a paragraph of art historical analysis followed by a brief description of how the artwork was looted and restituted. Other items on display, such as August Sander’s photographic portraits of his Jewish neighbors seeking to escape persecution, and a concentration camp ledger recording the names of thousands who perished at the hands of the Nazis.  This sobering reminder of the context of this exhibition adds an extra layer of gravitas to the exhibited art objects.  Of the 3478 human beings recorded in this single ledger, only 11 survived. Viewers are not just reading fantastical stories or art historical analyses. They are witnessing the afterlife of the attempted annihilation of Jewish culture and faith. 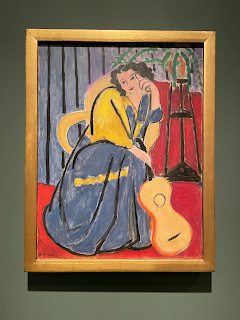 For some paintings, such as Henri Matisse’s Girl in Yellow and Blue with Guitar (1939) and Daisies (1939), the journey was short and bitter. Both paintings were stolen by Nazis from famed French-Jewish art dealer Paul Rosenberg’s Bordeaux bank vault and were earmarked for Nazi Reichsmarschall Hermann Göring’s personal collection. The wall text indicates that the saga concluded “following the war, both were returned to Rosenberg and were later sold.” Other paintings, such as Max Pechstein’s Landscape (Nudes in a Landscape) (1912), were lost for decades, forgotten amidst dusty basements before resurfacing in institutional collections. Pechstein’s Landscape was restituted to the heirs of Hugo Simon, a German-Jewish banker, this year (2021!), evidencing the ongoing battle against Nazi plunder.

The exhibition culminates with a display of contemporary works by artists Maria Eichhorn, Hadar Gad, Dor Guex, and Lisa Oppenheim. Each of the aforementioned artists seeks to shed light on the enduring legacy and ramifications of Nazi plundering while simultaneously shedding light on restitution efforts. Maria Eichhorn even put together a dossier of philosopher Hannah Arendt’s field reports, memoranda, and other primary documents from her time as an emissary for Jewish Cultural Reconstruction, Inc. (JCR). This dossier offers a documented view into the restitution efforts that took place in the wake of the Second World War. Visitors are encouraged to take a copy of the dossier with them. The unassuming booklet serves as a tangible record of plunder to take with them back into the real world.

Overall, the Jewish Museum exhibition offers a broad overview of an issue that is often sensationalized by the mainstream media. Afterlives draws viewers into a world of beautiful and sacred objects that were pulled from their owners and subsequently destroyed or traded by those in power. I had hoped that the exhibition would shed more light on the arduousness of restitution cases or even provenance research itself.  An untold number of art objects remain missing. The laws governing clean title vary from country to country (i.e., rightful ownership). And, there is no universal standard in place for conducting provenance research or due diligence. It can be a long and tedious process to follow the path of an artwork that someone has disrupted or tried to erase. However, I hope that each individual who visits this exhibition is left with a greater understanding of the work that has been done in this field and the work that is left to be completed.

* Afterlives: Recovering the Lost Stories of Looted Art is on view at the Jewish Museum in New York until 9 January 2022