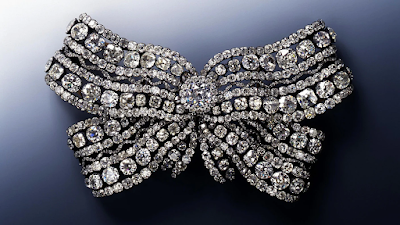 Yesterday an indictment was filed at the state court in Dresden, Germany formally charging six individuals, aged 22-27 with serious gang theft and arson for their alleged involvement in the 25 November 2019 burglary of the Green Vault (Grünes Gewölbe in German) museum within Dresden Castle in Saxony. In that dramatic incident, a precision coordinated team of thieves pried open iron bars to access the museum through a window and smashed open exhibition cases using an axe to make off with an outstanding cache of historic jewellery.  Objects taken during the theft  include the 49-carat Dresden White Diamond, the diamond-laden breast star of the Polish Order of the White Eagle, a 16-carat diamond hat clasp, a diamond epaulette, and a diamond-studded hilt containing nine large and 770 smaller diamonds, as well as its jewel-encrusted scabbard.  The historic pieces have been valued at almost 113.8 million euros.

Three suspects, from the Remmo Arabische Großfamilie clan, Wissam Remmo, Rabih Remmo, and Bashir Remmo, were arrested during a raid last Autumn which proved almost as sensational as the theft itself.   Carried out on 17 November 2020, special forces from the federal government and the states of Baden-Württemberg, Berlin, Brandenburg, Lower Saxony, North Rhine-Westphalia, Saxony-Anhalt and Thuringia spread out to search some 18 properties in several districts, arresting the three suspects and hoping to recover all or part of the stolen jewels.  Wassim was arrested in his car in Berlin while Rabih and Bashir were picked up when police stormed apartments in the densely populated suburbs of Neukölln and Berlin-Kreuzberg. While cell phones, computers, clothing and some drugs were seized during the massive manhunt, none of the stolen museum's stolen jewellery was recovered.

On 14 December 2020 and 18 May 2021 twin cousins Mohamed Remmo and Abdul Majed Remmo were also placed in handcuffs.  By summer, law enforcement officers in Saxony also arrested a sixth suspect, Ahmed Remmo on 19 August 2021 at an apartment in Berlin-Treptow.

Two of the six men accused in the break-in into the Green Vault, Wissam Remmo and Ahmed Remmo, are the same perpetrators who had already been convicted for their roles in the 27 March 2017 Bode Museum theft.  In that incident, members of the same crime family and an unrelated accomplice orchestrated and carried out the theft of a 100-kilogram gold coin called the "Big Maple Leaf" valued at 3.75 million euros.  Despite having been sentenced to 54 months and fined €3.3 million for that theft, Wissam Remmo and Ahmed Remmo had remained at liberty in the German capital while they appealed their sentences.

Ironically, two days following the breaking at the Green Vault, Wassim Remmo had been stopped while driving to the Erlangen district court.  Inside the vehicle, inspection officers noted balaclavas, gloves, a crowbar and a hammer drill.  For now, four other suspects are still wanted for questioning related to aiding and abetting, as CCTV footage seems to indicate that the individuals may have been spying on the museum in the lead-up to the November 2019 break-in.

If convicted in the Dresden Regional Court, the six suspects face prison sentences ranging from 10 or 15 years, given that two of the suspects were 22 years old at the time of their alleged involvement in the museum burglary.

Meanwhile, another court case also got underway for another member of the Remmo clan. Muhamed Remo (31), father of three and nephew of clan boss Issa Remmo (55) was in court yesterday answering to charges related to the February 2021 armed robbery and assault on a money transport vehicle.  In that case, four men posing as garbage workers made off with 648,500 euros.  Muhamed was arrested when his DNA was matched to evidence left on a witness's sweater.  Since his arrest, he has confessed to his role in the heist admitting that his cut for the robbery was 70,000 euros and that his drippy nose, which proved his undoing, stemmed from his cocaine consumption.